When I upgraded from my old GF2MX 32MB card to the ATI Radeon 7500, I was so impressed it never dawned on me to overclock it. Still, ol’ Hoot got so tired of reading about everyone else doing it that he just had to give it a go. Not that my eyes cared about frame rates faster than what I see at the movies, but just for the challenge.

Before I embarked upon that endeavor, I figured I would have to improve upon my video card cooling – again, because everyone else does. I can not figure out why manufacturers insist upon putting a sticker over some of the RAM chips, but since my warranty was about to become a thing of the past, I pulled it off. Hmmm, no lightning bolt from the blue. No “Mattress Tag Police” kicking down my door. Oh well…

I’ve seen some pretty heavy duty cooling implemented by other people, but I decided to do mine “On the Cheap”. I can entertain that luxury quite often, because I am fortunate to have several Electronics Reclamation and Surplus stores in my area.

Off I went to the Surplus store armed with an idea, a caliper and a few bucks. They had surplus heatsinks of every shape and size imaginable, many in like-new condition. First, I scoured the bins for something copper, but to no avail. It was aluminum or nothing. I bought three of these babies for $1.68 total and scurried home: 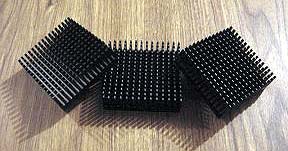 Okay, I had to cover the GPU and the RAM chips, so out came the caliper and off came the little heatsink on the GPU. I expected it to be tough going, prying it off without taking the GPU with it, but I just warmed the heatsink with my heat gun and slipped a utility knife blade in between the two slowly. After I got it in a ways, I pried up slowly and off she came. A lot easier than shucking an oyster.

I cleaned off the top of the GPU with some industrial strength Flux Remover, rich in Environmentally Unfriendly chemicals. I took one of the heatsinks and laid it on top to eyeball the fit. My measurements were good and it didn’t hit any surface mount components. I lapped off the black anodizing on all three of the heatsinks and went for the glue.

When I did this project, Arctic Alumina epoxy had not come out yet, so I used Arctic Silver epoxy. I squeegeed a thin layer upon the top of the GPU, then I ran my finger around the perimeter to wipe it off back from the edge about 1mm. My reasoning was that if it spread out under pressure, that empty ring around the edge would be the place for the excess to go.

Before it set up, I examined it and no excess had ran out and down the sides of the GPU. This was actually a dry run for the memory chips to come. I put a one pound spool of solder on top and set it aside to cure.

Having measured the dimensions of the RAM chips, I determined how big to cut the sections of the remaining two heatsinks into: 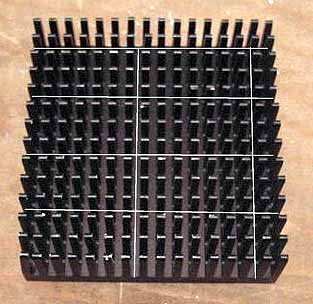 Every tinkerer should have a vise – they really free up a valuable hand. I clamped the heatsink into the vise (notice the rag to protect the finish) and grabbed my hacksaw. Using a fine-toothed blade I started sawing, slowly, with an eye on accuracy: 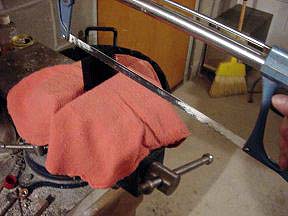 This produced 8 miniature heatsinks and some scrap. I cleaned up each one with a fine-toothed file, slowly, as best I could: 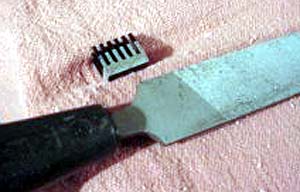 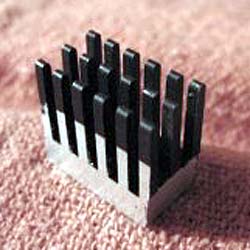 The more observant among you will no doubt notice that the little heatsink has only 3×6 pins as opposed to 3×7 indicated in the marked up heatsink. Well, who asked you anyway?! Actually, I’m writing this article long after I glued everything together and that was all I had available for the pictures. By now, the GPU heatsink had cured and thank God, had not slid off of center.

Using the same “wipe-back” edge technique, I glued the four on the GPU side Ram chips and before the epoxy cured, made sure no excess had oozed past the edge of the chips. The legs on those surface mount chips come real close to the top of them, so there was virtually no room for error. Looked like my “Wipe Back” technique was a success. I let them cure and repeated the process on the back-side Rams.

I apologize for the lack of sharpness in this picture, but you can pretty much see the absence of ooze: 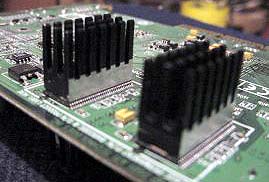 I might mention that though I did not take a picture of this, the bottom, most rearward back-side RAM chip came a little too close to the DIMM socket lever, so I had to file a little clearance on one corner of it. That is barely visible in the last picture as a shiny spot on the corner. Here is the final product: 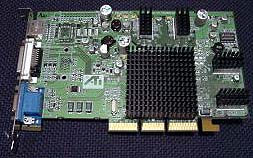 Now some of you hard core types will no doubt scream, “What no fan on the GPU?!

I’ll tell you that if you have sufficient through-case airflow and use a big enough heatsink on the GPU, you do not need an additional fan. Not having any other cards around the AGP slot is a big plus also. If I obstruct the airflow in my case, the GPU heatsinks gets warm rather quickly, so I know the heatsink is doing its job. With the airflow unobstructed, it quickly cools down to less than skin temperature.

So, now I am running the GPU core at 350 MHz and the Memory at 300 MHz. Whether I could have done that without the additional cooling and not suffered any performance degradation, will forever remain a mystery.

For you Gaming junkies out there, waiting to pounce on my benchmarks, “Sorry Charlie”, I checked them a long time ago, but I did not want to interrupt this article to check them again. I do recall my Q3D 1024×768 32 bit color was more than 100 FPS, but less than 150 and 3DMK2K1 was something like 5500.

FIRST LOOK NATA Computers was kind enough to send a LeadTek GeForce 2 GTS for our evaluation. I want to say from the outset, this is one helluva’ piece of work! One of the first things I did was to

Micro Stutter: The dark secret of SLI and Crossfire

Most of you reading this will likely have some idea of what “micro stutter” is. If not, you may have experienced it.