The ancient ones among our readers will remember the great ATT Videophone flop some 40 years ago.

A true engineering marvel for the time, the idea of tying the phone to real-time video really excited the folks over at Bell Labs. Unfortunately, it stopped there – consumers rejected the VideoPhone because it was expensive, unwieldy to use, unnatural and, as shown below, almost required a studio to house the gear: 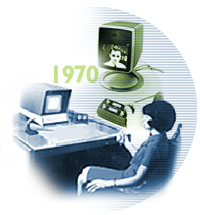 Fast forward to what is now becoming a truly interconnected globe. According to research study done by TeleGeography, the base of wireless subscribers will reach 8.2 billion by 2013: 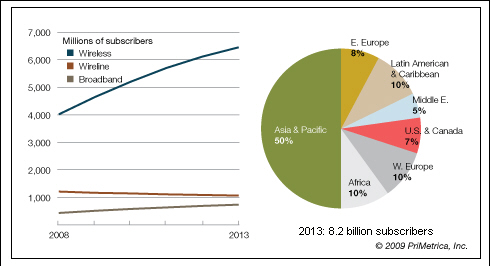 Considering the world’s population today numbers 6.8 billion, what this tells us that just about every person on earth will have a cellphone or at least access to one someplace. One reason for this is that it’s a LOT cheaper to put up a cell tower than to lay copper cables – hence coverage explodes.

Bandwidth is the name of the game, and ATT is planning to upgrade its network from 3G to 4G; this means that data speeds over 4G will hit something like 20 MB/s in the 2012 time-frame. In the interim, ATT is upgrading the 3G net to handle speeds up to 7 MB/s – about twice what they are now. It’s not a stretch to forecast that you’re going to see real-time video over cell phones. 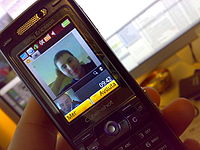 Think of what this means to the equipment makers – a whole new set of phones and apps to handle video. While some may think that this is going to be a niche market, I beg to differ. I think cell phone video is going to explode usage and bandwidth demand to unexpected levels. Think of some possibilities:

The first time someone records a newsworthy event – some celebrity throwing up on the sidewalk – demand will take off like gangbusters. I can’t imagine a more fertile source for YouTube videos! The immutable fact is that bandwidth is getting very cheap and cell phone providers will offer video capabilities over the next five years. Cell phones are going to take on a lot more imaging capabilities and users are going to embrace it with a passion.

Social networking is driving a lot of internet usage and the cell phone could become the enabling appliance. Look for a first-implementation from iPhone – maybe within a year?

The Man Who Killed AMD?

We summarize Hector Ruiz’s career, and point out that he still has one big card left to play.

As the iPhone gains in popularity, does it become a “public good”?