An easy way to explore the virtualization world – Joe

SUMMARY: An easy way to explore the virtualization world.

I’ve been using Ubuntu to see if I can break my Windows habit. The conclusion I and many others have come to is that for the bare necessities (internet, email, word processing, image editing), Ubuntu can fill the bill. Once you stray from this, Windows’ OS monopoly kicks into high gear and for many programs, Linux is not an option. In addition, Linux drivers for many printers, scanners, etc, are not available.

For example, I have a flying simulator that is only available for Windows – cost me $200. I’m not about to throw it out the window, so in this case I’m wedded to Windows. You also quickly find that almost all “specialty” programs are written for Windows as well – a testament to Windows’ ubiquity.

Part of my desire to break my Windows dependency is driven by daily stories of Windows’ vulnerability to virus and hacker attacks. If your PC has any sensitive information, you’re required to use a software suite to protect against viruses, malware, and who knows what else is coming down the pike. PC users probably spend as much money on virus, malware and firewall software as for productivity software.

Think of it: What other product is acknowledged out of the box to be so unsafe that you are required to spend probably the same amount of money to make it safe as to buy the product. If Windows were a drug, it would be banned.

I’m sure many in our audience have enough spare parts to build a backup PC, so that’s what I did for using Ubuntu – a dedicated Ubuntu box. It’s also possible to build a dual-boot system. The problem you run into is file sharing between the two – in the above scenarios, not impossible but a bit of a burden.

Another approach is to build a virtual machine using virtualization software. This approach allows a user to run, for example, Ubuntu within Windows (or the reverse) as two functionally separate machines – no rebooting and file sharing much easier. One product that’s been around for a while is VMWare – no charge. Another product which I feel is much easier to use is VirtualBox. This is relatively new on the scene and is also free. (Go here for the User Manual, here to Download, and here for the VirtualBox Forums – a great place to get some help.)

VirtualBox installs very easily – here’s an excellent How-To which takes you through the process to install Ubuntu in Windows. Running VirtualBox gives you this screen: 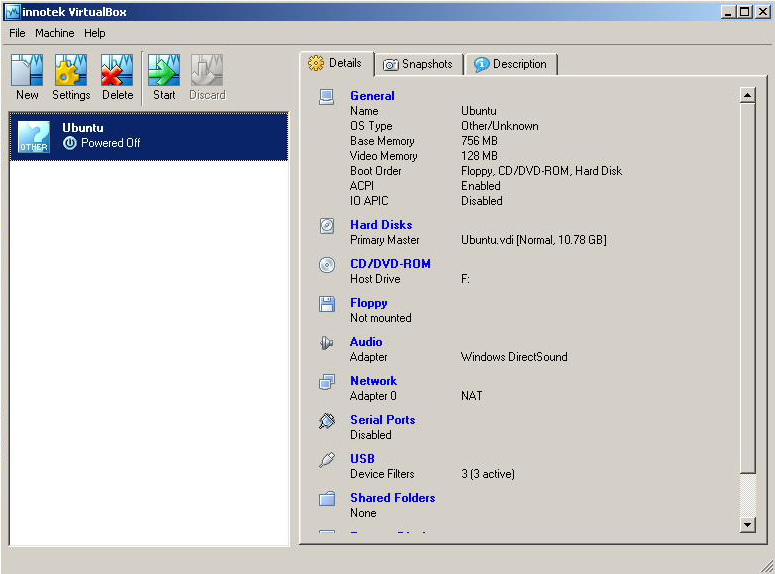 All of the areas on the right side (blue text) are accessible through the Settings Menu: 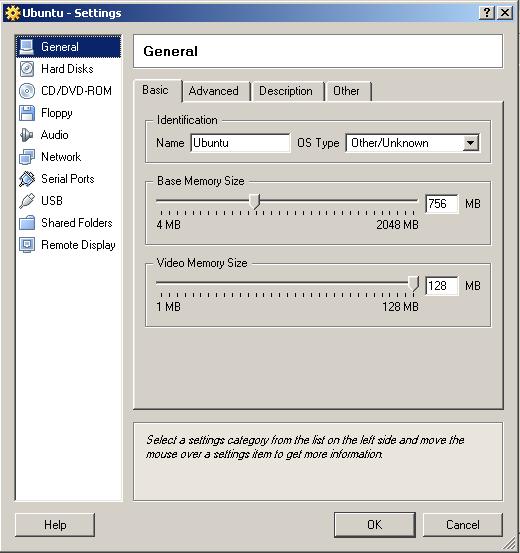 VirtualBox includes settings for USB devices – they must be running for VirtualBox to latch onto them. You click on the green “+” button (right hand side) to include it in the virtual machine. Note if you plan to use a pen drive, it has to be hooked up before you start the virtual machine. 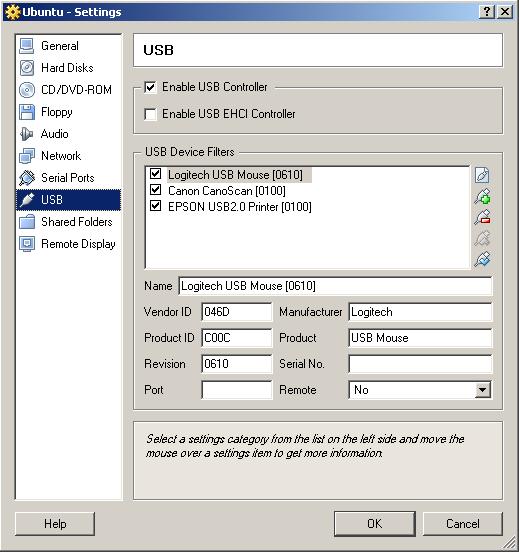 Once you set everything, your hit Start and you see this: 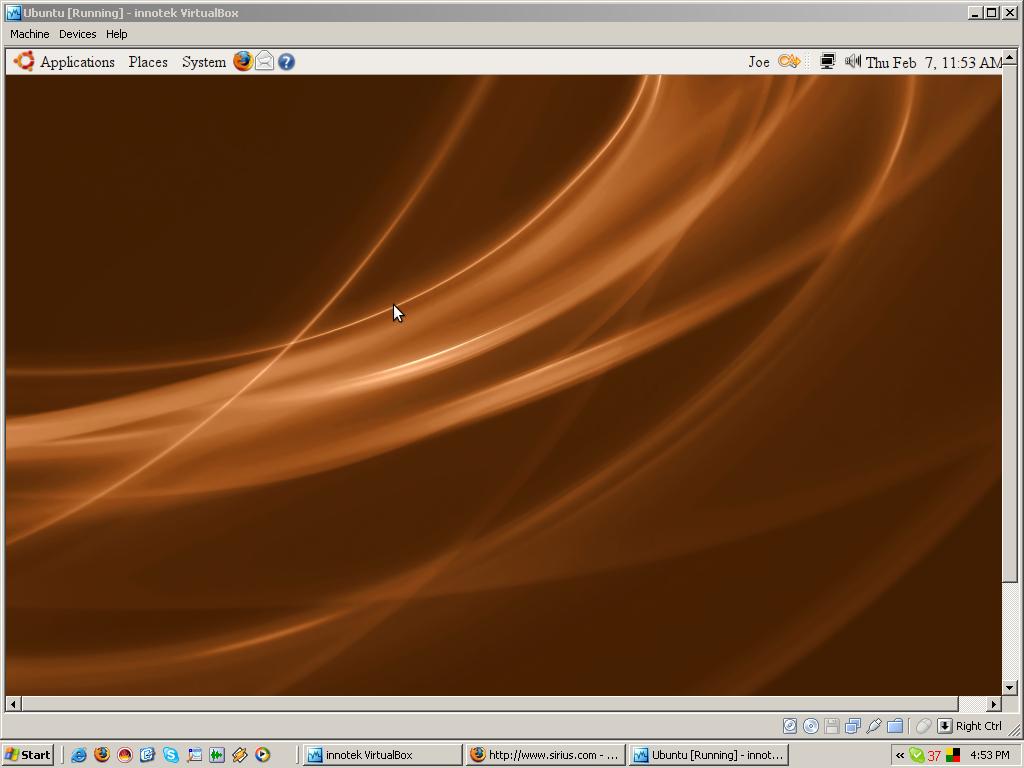 There are hot-buttons so you will only see the virtual machine on the screen. Notice that I am running a streaming voice app in Windows – I can hear this even when running Ubuntu; any Ubuntu sounds run without interrupting the Windows audio.

My experience to date with this setup is not all that good – my problem is that I can’t get the USB devices to work. I’m sure there is some fix but I’ll have to do some forum hopping to find it out (and it will probably involve invoking the usual Linux esoterica). Aside from the USB issue, everything works as if it were a stand-alone system.

When I first ran Windows XP as a virtual machine, I could not access USB devices – I had a sinking deja vu experience. However, this turned out to be trivially easy to fix. Under Properties for my printer, there is a USB option to be checked for the printer: 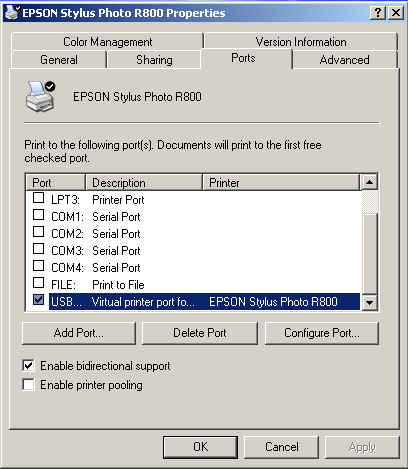 Once checked, ALL USB devices were recognized. All it took then was to install the drivers and I was fully functional. Windows apparently is very well behaved in this setup. If you want to use Windows only when necessary, not a bad way to go – use Ubuntu most of the time (what a joy to access the net without worrying about viruses! Downloads two – three times faster than running Windows) and switch to Windows for those WIndows-only programs.

No such thing as a free lunch – all that virtualization software takes a toll on performance. I have not yet run some benches, but found this comparison:

Source: article VirtualBox at heise.de, 2007-01-15: “The kernel compile gives information about the hard disk I/O and of course about the CPU performance, while the grep was done to give an impression of the pure read performance of the hard disk.”

This is clearly not a setup if you’re into some heavy CPU or disk usage. However, in use to date I have not seen any performance degradation – I would guess that it depends on how much RAM you allocate to the virtual machine – I’ll do some testing on this point.

VirtualBox is an easy way to explore the virtualization world. IMHO virtualization is a technology that will find more use on our desktops as users explore OS options.

For years, we have measured video cards by how many frames per second they could put out in various games. It was a good measurement. You want to play a game, not Keystone Kops, especially when the cops are trying