BOTTOM LINE: The VOS32 is big, ugly, noisy and clumsy to handle, but no guts, no glory. It gets the job done better than any I’ve seen so far. If you are going for O/C glory, put this at the top of the list. If you aren’t hellbent on getting every Mhz possible out of your processor and you want a very good, cheaper cooler that is a good dealer smaller and lighter, the Golden Cyclone is for you.

The two are a study in contrasts; finesse versus brute force. When I look at the two products, I keep thinking Cold War American vs. Soviet. The Thermaltake Golden Cyclone (essentially a Golden Orb with a slot 1 plate attached) is the American finesse product; nice-looking, smaller, lighter. The Global Win is the Soviet product; a huge, comparatively ugly aluminum brick.

The Thermaltake people seem to have taken the attitude, “Let’s design our way to a cooling solution.” The GlobalWin folks seem to say, “If we throw enough metal and fans at it, it will work.” 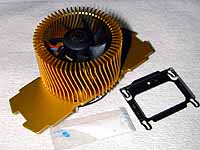 Let me put it this way: You wouldn’t be surprised to see the Cyclone in a Macintosh; you’d never see the GlobalWin. 🙂

However, looks aren’t everything.

Installation of both were about what you’d expect. The Golden Cyclone is a lot easier to maneuver around the case, and unlike it’s older brother, you don’t have to slam it into place. The GlobalWin handles like the big aluminum brick that it is. The Global Win is a lot bigger and heavier than the Golden Orb, and got uncomfortably close to the first memory slot in the AOpen AX63Pro. If you need to use that first memory slot and don’t like the idea of fans blowing hot air right on your memory, this may not be the product for you.

Nor may it be if you are sensitive to noise. You will always know if your computer is on or not if you have the VOS32 installed.:) Not that it’s any noisier than other dual-fan cooling products, but it’s not any quieter, either. The Golden Cyclone is quieter, but not silent.

These were tested on a PIII 550 running at 733Mhz kindly provided by Neil over at Proton Computers.

While the Cyclone did well, the VOS32 did better than anything I’ve seen so far; the dual-fan Alpha I have came in at 28C.

Why the difference between the VOS and the Cyclone? Personally, I think it’s the fans and the coverage. The VOS32 comes with two big fans attached; each bigger than the comparatively modest one plunked right in the middle of the Golden Orb. I’m also more comfortable with the Global Win design; it has fans and heatsink fins covering much more of the Slot 1 surface area than the Orb, which just has a plate covering the left and right side of the SECC2 package.

Which should I buy?

If I were going to take a Coppermine and run it at around 800Mhz, I’d take the Golden Cyclone, just because it’s cheaper ($17 at NATA) and does well enough. For that, the VOS32 is overkill.

If you don’t want to take any prisoners in your O/C quest, and can handle the difficulties of a brick in your computer house, the VOS32 is your tank for CPU cooling.

If I were going to take a cB0 Coppermine and go for 1Ghz, I’d want the VOS32. So what if it doesn’t win a beauty pageant, it works. A quick glance at the other review sites show it edging out even the Alpha P3125, and that’s not bad for $30.

Finally, there’s also something viscerally satisfying and reassuring about having a heavy-duty hunk of metal and set of big fans protecting your CPU when you are pushing it to the limits, a feeling you just don’t get from the Cyclone.

If you know water cooling, then the name Primochill is familiar to you. We have one of their new items here today to review – the new Primochill Compression Tube Reservoir (CTR for short).