OK, so I’m not an overclocking nut and haven’t really dedicated my spare time into increasing my CPUs by that extra 1 Mhz, but I’ve always had an interest and have tried the odd dabble every now and again.

I managed to pick up a nice AMD AXIA Y Thunderbird 1 GASH CPU back early last year with a promise that it would run happily at 1.4 GASH, now for the price I payed for it I thought it was a bargain. Now what the the seller never told me is that I would need a hurricane inside my PC to keep it cool.

I tried all sorts – different thermal pastes, larger HS/Fans and even a huge 12″ deskfan blowing in the side of the case to keep it cool. So after wasting loads of cash on fans and stuff, I got myself a Coolercase Tornado, which almost sounds like a hurricane 🙂 when switched on.

This in fact solved my problems and it’s a smashing case except for one thing: YES THE NOISE, CAN YOU HEAR ME!! It’s pretty bad to say the least, but the case does boast 282 CFM with it’s 6 x 80mm high output YS-TECH Fans.

I just had to do something – it was driving me crazy!

So I searched around the net looking for ways to make the noise go away and I cam across a link into the www.TekHeads.co.uk Watercooling forums. Now first thing I thought, was these guys are nutz, literally NUTZ! How the hell can you use water inside a computer.

But, being the intriguing person I am, I started asking a few questions and within a week, I bought lots of watercooling bits. In fact, I bought the whole kit needed, which wasn’t the best thing to do really, as now looking back, I wasted a lot of money.

But hey, it’s worth it – right? The noise has gone right? NO! My noise never went as I needed fans on the radiator – 2 in fact, big 120mm fans running at 12v makes an awful noise and it just didn’t solve my problems.

What could I do to get rid of this noise?

Use a large reservoir and get rid of the radiator was the option I took. I went down to the local DIY shop, bought a 50L Tupperware box and used that. In fact, it worked OK for a short while until the water temperature rose to room ambient temperature, and then with the CPU wattage added on top, it started to rise, which in turn has an effect on the CPU temperature.

Now I’ve promised myself not to post any figures whilst writing this article, as it’s more for the watercooling noob. So I’m not!

So, I was back to using my radiator and 120mm fans with a large reservoir now. So to be honest, the reason I got into watercooling was to reduce noise (my excuse to the wife) and I just could manage it, but I wasn’t going to let it get the better of me.

So I took drastic measures and decided to move the noise elsewhere. In a different room, you might be asking? Or in a cupboard?. Tried that – no air ventilation and doesn’t work.

So I moved it outside – yes, that’s right. I went down to the local Hire shop, hired a large Hammer Drill, made two holes in the side of my house, threaded some 1/2″ thick walled tubing outside and made a box which hosted the Radiator, Fans pump and reservoir.

Now over the months of watercooling, I picked up all sorts of tips from loads of people, so I knew what I was after – and that was making a self contained RADBOX, as I call it, outside. So I did.

The contents of the RADBOX:

Put this all in a box (my DIY skills suck) and attached this to my rig with an Eheim inline pump, mounted in the house for water circulation around the system.

The pump which was mounted inside the RADBOX was purely for circulating the water around the radiators outside, because I wanted maximum throughput over my waterblock, helped reduce temps. 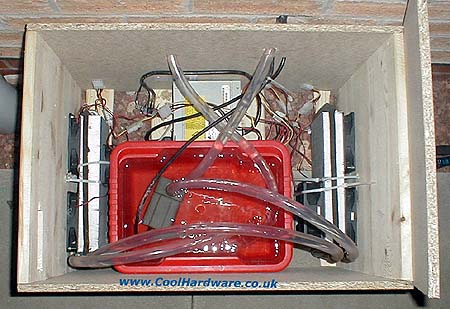 Now the question again: Did this solve my noise problems? YES!

You bet it did. I can’t hear a thing now and my quest for silence was complete.

So just to summarize a little: Ask questions, do an awful lot of reading if you want to save yourself some pennies and if you are moving to watercooling for silence, then think again.

Ho yeah, and by the way – the temps of the water? Well, let’s just say about 3 degrees above ambient, and since it’s outside and I live in the UK, then you can work it out for yourself. Again, a promise of no figures.