The last piece I wrote I talked a bit about innovation. I also challenged the Overclockers.com readers to push the barriers again instead of just using what works. Well, I wasn’t disappointed in the e-mail responses I got from that one! But I still feel overclockers in general are coming up short compared to where it was a few years ago.

One reader found a case from Zalman using heat pipes. Neat for sure, but a tad expensive at around $1,400. It is still a step in the right direction. Something off the wall that 99.9% of the people wouldn’t try just because it’s so radical. THIS is what I remember overclockers doing and the big companies following, not the other way around. Individuals are capable of a lot too (even if they do get corporate help eventually).

I also got a response about how I have not put one bit of innovation back into the community in almost 4 years. Well, I have, just not in the arena of desktop computing. My tinkering with water cooled computers renewed my interest in another water cooled machine that is commonly used as an analogy for how a water cooling system works in a PC – the automobile.

For the last few years I’ve been racing cars. Not street racing, real racing, but using my daily driven car. Mainly autocross, road racing and drifting. But what am I getting at? OK, OK, I’ll get back to the plot.

If you look around for a race car data logging system, you’ll find a few, most over $6,000 if you want to measure everything the right way. So in my idea of true overclocker fashion, I took the current state of things and turned it up a notch. Or rather I turned it down a notch, the price of such a system that is.

So I took what I learned creating a watercooling controller for a PC and applied that. Using several micro controllers and a Shuttle Mini-PC, I created a system to monitor/log suspension travel, all manner of ECU and engine parameters, 2 axis accelerometer and water injection control.

The first race I took the new system out, I ran into a fairly huge problem: The trunk of the car isn’t well ventilated and that’s where the Shuttle Mini-PC was. The Shuttle Mini-PC didn’t fair too well in the 115ºF ambient temps – it crashed. I just about gave up on it, but I just couldn’t stop now. The problem was obvious – the solution was obvious: Cool the thing better. You know what they say… Go with what you know.

Well I couldn’t cut a hole anywhere, as that would equal a frame modification and bump me up a few classes. Just about any other kind of vent opening on the interior would bump me up a class. One thing left – there are no rules against adding a few water lines back there and a radiator up front in the engine bay.

From being in the water cooling game for a while I had extra parts – radiator, pump, tubing, and water block. No fans needed. At a race speed of 100+ mph, I think I’m flowing a few more CFM through a 90mm hole than just about any 92mm fan made today. So that’s taken care of.

As you can see in the following pictures, it’s easy: 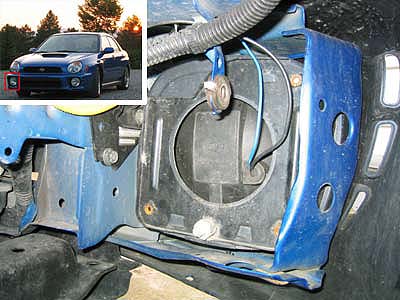 The location selected for the radiator. The red box in the upper right corner picture is a general idea of where you’re looking in the rest of the picture.

Picking the location was difficult, but when I remembered back when I installed the pin spot driving lights in my WRX stock fog location, I had an idea. There was an opening behind the light to pass air through. Easy. 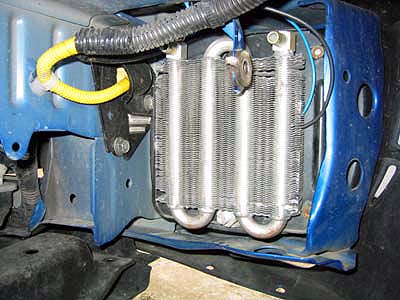 Close fit on the first try, even though just the center 2-passes are really getting the most air.

The rest of the details are pretty much like any other water cooled rig. Since I needed 120v AC for the Mini-PC, I used a 120v Eheim 1048 pump. For the ½” water lines to and from the radiator, I actually used aluminum fuel lines. I could get away with just a loop of that line up to the front of the car and back and ditch the radiator, but it’s nice to have, just-in-case.

I have since not had a problem with heat, even on 90ºF days with the sun on the car and doing an hour on the track. I use a rather small 6.4 GB hard drive that seems to take heat and vibration very well. And just about everything but the serial and parallel ports are disabled.

Maybe not extreme innovation – some would say I was just using what works. To those people I ask: “You’ve got a water cooled PC in your car doing telemetry logging too?”

I take my innovation where I can, but I never like to settle for how it is. Nor do I like to just follow along till I get OK results. I need that last inch. That’s overclocking to me, not just chasing the MHz.

The article is here. Not a lot of news, which says something. Couple points are worth commenting on, though. Recession, Depression, Or Both? “Recently, spokespersons for several manufacturers mentioned that the past few weeks have seen a noticeable increase in

Oh, What A Tangled Web We Weave

AMD is supposed to demonstrate a four-way Sledgehammer Opteron at Computex in Taiwan. There’s a bit of a hullabaloo about what will be demonstrated. These won’t be introduced for close to a year. Running a four-CPU cluster is a good