SUMMARY: Not so easy to do consistently and measurably.

As many of you know, I’ve been working on setting up a waterblock test rig, with great help from Bill Adams.

One on the key tasks is to develop a mounting system that is consistent and measurable:

The first rig I built was consistent, but I had no idea how much force was used: 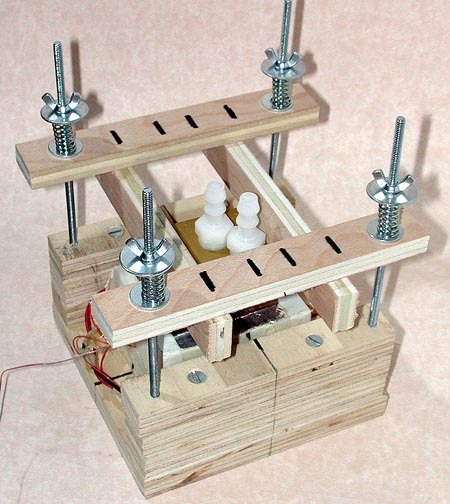 At least it was consistent….

The marks you see were used to line up the supporting elements such that everything was aligned on centers. The overall objective it to ensure that the force is concentrated at the exact center of the die – no distortions in measuring performance because the waterblock is canted to one side. If it is, you see it right away because results are all over the place.

So I gave this some thought and decided that a mounting system like this was backwards – rather than move the waterblock around and use springs on it, why not fix the waterblock in place and raise the die tester towards it. I figured it would be easier to measure force with a platform than with springs, as I was thinking about using a pressure transducer to measure force.

So I take a look at pressure transducers and gag – these are expensive! By the time you get a good one and the necessary panel meter to run and read it, you could easily spend $700. Got to be a better way.

And this is where the Post Office inspired me…

I wanted a digital readout on force, and thought that maybe what I could use is a digital postal scale – it would accurately measure force and give me a digital readout. Out to Staples and I buy a Pelouze shipping scale ($130); this can weigh up to 150 pounds and reads out in 0.2 lb increments.

Now that I have the scale, I have to build a test rig to hold the scale and waterblock, and then a system to precisely raise the scale with the die tester on it to precisely contact the waterblock’s base where is should be contacted. Easier said than done.

I started out on this quest about two weeks ago… I’ve spent probably $200 on springs, bolts, knobs and other assorted hardware in building and testing various combinations, including

Through each iteration, you get “glimmers” of what works, what does not and why.

Finally, I came up with this: 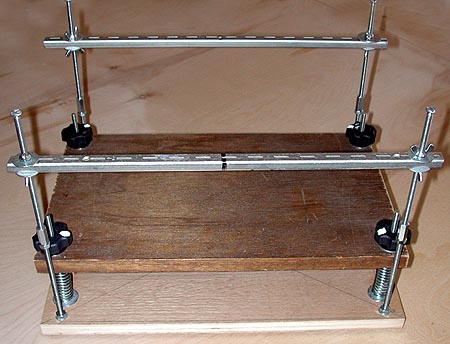 The concept is simple – raise the platform equally on all four sides by measuring and turning the knobs slowly. As the die tester contacts the waterblock, mounting force is measured by the postal scale: 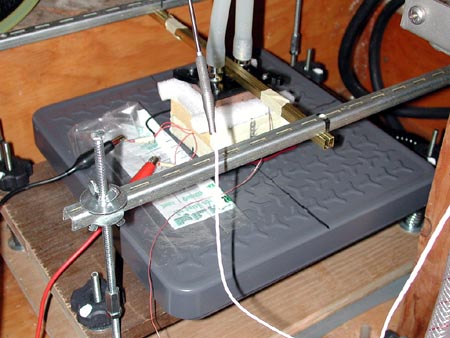 With the scale, waterblock and die tester in place.

What you realize very quickly is that centering and measuring become a bit of an obsession to make this work well. For example, I have a product called Zig-Align that I use in my darkroom; what this does is enable you to position two surfaces parallel to each other within .0005″ (yes, three zeros) using mirrors and LEDs. In this case, the bottom of the mounting bars and base platform are VERY parallel.

I found that by using this system, fanatically measuring and centering things, I could get the following results:

You can tell when you have extremely good contact with the die – when you remove the waterblock, you can feel the suction between the die and waterblock; the contact patch looks like this: 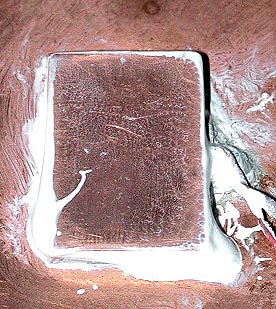 The goop along the edges and the “tail” on the die are due to the suction actually drawing in excess thermal grease when you separate the two. This is a special thermal grease courtesy of the good guys at Arctic Silver – it’s made specifically for heatsink testing, so it thins out very quickly; great stuff!

Well, it’s been an interesting two weeks! I don’t think I’ve spent as much “intense” time on a project as this one. I have ideas on how to further decrease variability and will be upgrading the rig over time. However, accuracy right now is sufficient to begin waterblock testing, and I’ll be reporting on test results shortly.

ED NOTE: Nevin over at Arctic Silver sent this in: I bought a few new heatsinks at the Fresno computer show to test out how well in-socket thermistors compare to CPU temp readings using Intel’s internal diode. When I looked

Surlyjoe’s waterblock gave me an idea to try some of my own engineering. The finished product. Since the last thing I wanted to do was sink some cash into buying a fancy radiator, I bought myself 2 bucks worth of