I recently bought a 500E (FCPGA) thinking that I would be happy going 140 or 150 x 5.0, just to find out that going 140 and 150 FSB just isn’t too good for your AGP video card. Using that as a cheap excuse, I returned my 500E to get a Coppermine with a higher multiplier – a Coppermine 600E. The store only had slot-1 600E Coppermines; I was being hasty and knew nothing about slot-1 Coppermines, whether they were overclockable or not, but I purchased it anyway. When I got home I was able to overclock it to 900 MHz!! Here is my system setup:

Vantec on GeForce: This mod was done by sawing about 1/3 of the Vantec off and using epoxy to mount it on to my GeForce SDR; notice the temperature readings on my bios screen for “TEMP 2” – pretty low after a heavy load of quake 3, eh?? I put the extra thermal diode that came with the BE6-2 under the heatsink to get a separate reading for my video card. 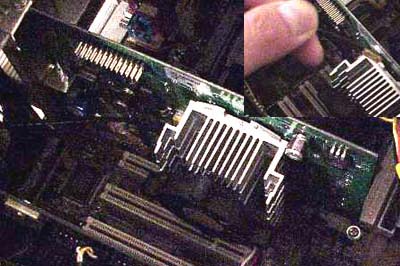 Vantec Intake: Some people like to keep their empty card slots closed when they aren’t using those PCI slots; I like to leave it open and have the dual Vantec fans that came with the PD5030 blow some cool air in.

Case info: You are probably thinking that I am crazy for what I did to my case; well you guessed right – I’m crazy. I didn’t use a ‘circle’ bit to drill holes – I used a regular drill to make a decent hole and cut squares with a special type of metal cutting shears and then sanded the edges so it wouldn’t be dangerously sharp. 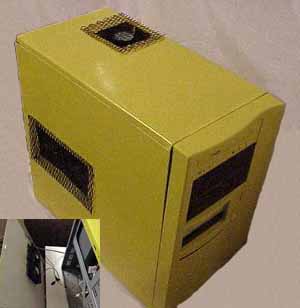 Air Passage: As you can see above, I’m following the good ‘ol golden rule about bringing air in/bring air out – just some general things to remember and practice when doing case mods.

CPU: Well, since this IS a Coppermine, I don’t need a crazy heatsink, I don’t. No matter how much I want to spend on a fancy heatsink, my CPU is always under 100F so I should chill out on the spending. I basically just slammed a GlobalWin fan on top of the retail heatsink – didn’t even remove it to put thermal paste; the stock paste is on now. But anyhow, this fan does way better than the stock one. 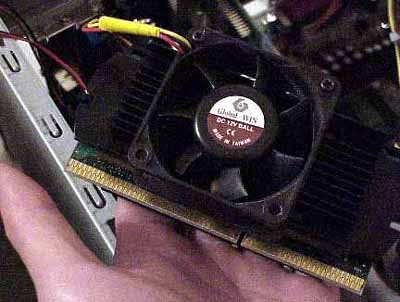 MAJOR WARNING: IF YOU GET YOUR COMPUTER UP AND RUNNING AT A HIGHER AND STABLE SPEED FINALLY DO NOT, I REPEAT DO NOT, PULL THE CPU OUT OF IT’S SLOT.. HAHAH.. MY FRIEND DID THAT AND HE HAD TO REBURN IN HIS CPU!! VERY BAD, VERY !!

PS: That picture of the monkey is my lucky tweaking monkey!! 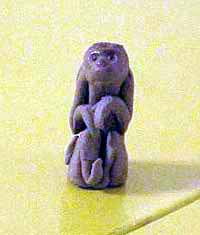