There is a simple modification to the placement which I found would yield temperatures within 1C of a thermocouple placed directly on top of the core, through a hole in the HSF. It is simple modification and can be performed in less than a minute. No special tools are required, nor is there any soldering involved.

The Thermistor, for whatever reason, is positioned such that it lies beneath the edge of the actual CPU core. Depending upon the manufacturer, the Thermistor may also not be elevated enough to make physical contact with the bottom of the CPU ceramic substrate. In that case, not only is it not located at the point where the core temperature is most accurately read, but it also is insulated by the air in between the head of the Thermistor and the bottom of the CPU.

The modification involves bending the leads of the Thermistor such that the head on it is centered and in direct contact with the CPU directly under the center of the core. What I did to accomplish this was place a flat bladed screwdriver against the leads of the Thermistor, about half way between the head and where it is soldered to the board. Then, I bend it back in the opposite direction. Pay attention to the resultant height of the head to make sure it is slightly higher than the surface of the socket. 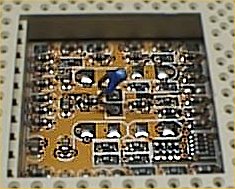 If you place your CPU in the socket, it should be held up above sitting flush on the socket surface by a small amount. It will rock a little bit if it is sitting on the Thermistor head before it bottoms out on the socket surface. The last step of the process is to apply a very small dab of thermal grease to the head where it makes physical contact with the bottom of the CPU. This ensures as minimum resistance to heat flow as can be obtained under the circumstances.

Using the modified thermistor in the picture, along with my Swiftech MC-462, with a type T thermocouple drilled through the base directly above the center of the core of my CPU, I obtained a reading difference of only 0.4 C. This was once the temperature had stabilized. Due to the thermal resistance of the CPU ceramic substrate, there is a temperature lag during transition from cold to hot, or hot to cold by as much as 2C.

I am so happy this evening with my new upgrade that I wanted to share it with you and the overclockers.com readers. I don’t know if you have already seen them in the US, by here in France we have

I was amazed by my PIII 550E’s and my PIII 500E’s overclocking abilities in the past. I’ve managed to overclock the first at 825MHz and the second at 740 MHz, but I was surprised by the abilities of a PIII

Will A Recession Cut Bloomfield Prices?