Improving the performance of your power supply – John “Hoot” Hill

Disclaimer: Neither the Author or Overclockers.com takes any responsibility for any damage if you attempt what is shown here. This article is for information purposes only.

I see a lot of people discussing the fact that their +5V is low and suspecting that their power supply is the culprit. Some times this is the case, but many times it is not. I will try to explain what I have observed regarding this problem. I have tried to keep it simple and in a context that non-technical people can follow. This is at the sacrifice of some technical accuracy. Those of you into Electronic Academia, look away.

Ohms Law tells us that for a given amount of current passing through a resistive path, a given amount of voltage drop will occur. We usually think of copper as a good conductor. Any conductor, regardless of the material, will exhibit some resistance to current flow. Obviously, the lower the resistance, the better.

The +5V coming from your PSU goes through a path comprised of several resistances that occur in the different parts of the path. Some are material resistance, like that mentioned above and some are resistance incurred as a result of insufficient contact area.

First, let’s look at how the +5V is distributed from the PSU. Some of the conductors go off to the Molex connectors associated with disk drives and some go off to the ATX connector that plugs into your motherboard. Regardless of where they end up, they all originate from a common point inside your PSU. The voltage at that point is sensed by the regulator circuitry in the PSU and is used to control it at a (hopefully) fixed level. 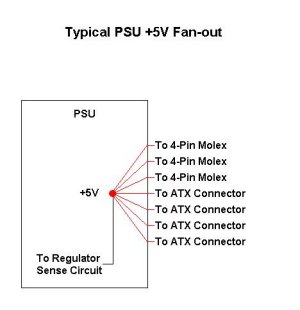 We will only concern ourselves with the ATX conductors as they carry the +5V over to your motherboard, though the conductors going to the Molex connectors can be put to use later on.

The following illustration represents the different path resistances that occur. I have placed the schematic symbol of resistors in them to drive home the point. 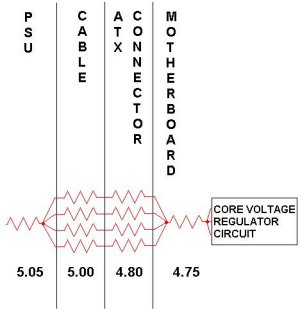 The first resistance is one many people never ponder: It is the source impedance of the +5V output inside the PSU. Generally speaking, it is a small value and if the PSU wattage is sufficient for your system setup, it does not enter into the equation. I mention it only in the interest of technical accuracy.

Now the main contributor to the voltage drop: The ATX connector itself.

Though the conductors coming to the connector may be large, their size is somewhat negated by being “funneled” down to the actual female pins in the connector and their associated male pins on the motherboard. Much like the surface of a rough finished heatsink mating to your CPU core, they do not necessarily make good contact.

The connector has to be loose enough to allow plugging and unplugging it without tearing the pins out of the connector and motherboard, so they are somewhat loose fitting. The more you plug and unplug that connector, the more of the mating surfaces erode and the looser they become. The looser the fit, the less contact area, the greater the resistance, the greater the voltage drop.

As these pins deteriorate, they embark on a downward spiral in performance. The less the surfaces are in contact and the resultant resistance, the more they heat up from the current passing through them. The more they heat up, the greater the resistance and the spiral continues. Some pins will get so hot as to melt the ATX connector.

Lastly, there is the resistance on the motherboard of the copper voltage trace from the ATX connector to the Mosfets used for regulating the Core Voltage of the CPU.

Though the +5V goes to places all over the motherboard for the various circuits, the bulk of the current is delivered to that regulator circuit. This resistance, though typically much less than that seen in the ATX connector, does contribute to some of the voltage drop.

As the conductors coming from the PSU to the ATX connector, the longer the path to the core regulator, the greater the resistance. That’s why you see some motherboard manufacturers moving their ATX connector as close as physically possible to the core voltage regulation circuit lately. Even they learn from experience.

So, what can you do about the ATX connector, which contributes the greatest to your +5V drop?

Obviously, you could solder all the ATX conductors to the motherboard, but that’s a lot of work and you would have to undo it and redo it every time you took the motherboard out and put it back in. Short of finding a different kind of connector more suited for the current, about the only thing you can do is “bandaid” the problem by supplementing the ATX connector with one or more +5V bridging paths around it. 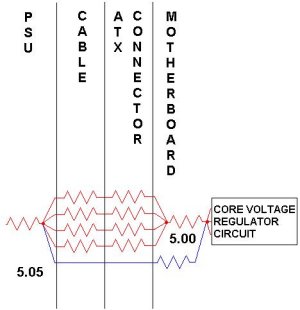 If you’re lucky and have an unused 4-pin Molex connector cable available, simply rob the +5V conductor from it – you can still use it to power your case fans. In the case of some ATX V2.03 PSUs, there is a cable that accommodates Intel PIV processors. I robbed its +5V conductor for my modification since I am using an AMD based system. 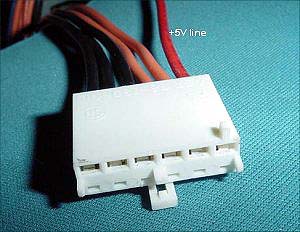 Once you locate the core voltage regulating Mosfets (usually six of them), you will see them typically grouped in threes, though some motherboard manufacturers still use twos. On three of them, the center pin is attached directly to the +5V path coming over from the ATX connector and three of them are not. You can determine this by taking a multimeter and checking each of them with the power on.

If you can not determine, beyond a shadow of a doubt, which is which, do not attempt this modification!

If you put the +5V booster wire on the wrong Mosfet, you motherboard will appear in the Classifieds section as a “fixer upper”. Once you have determined the correct MosFets, you can take one of two approaches. In case you do not already know this, the center pin on almost all Mosfets is electrically the same as the mounting tab. You can solder the 5V booster conductor to the tab of the central Mosfet like this: 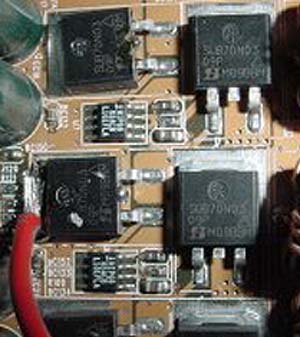 or you can do it like this, which is how I do it: 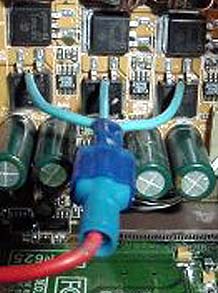 Admittedly, the spade lug connector in the second example adds a little resistance again, but it is designed for high current and has a tight fit and large contact area. Also, it is only 1 of five conductors, the other four being those in the ATX circuit. It sure makes removing and installing the motherboard a lot faster.

Earlier, I mentioned that you could put one of your 4-pin Molex connectors to use. To determine whether the +5V drop is the result of a PSU that has insufficient wattage for your system setup, or an ATX connector problem, all you need to do is take an unused Molex connector and measure the +5V on it while running your CPU at high load.

Since the Molex connector is connected to nothing, no current is flowing through it and hence no voltage drop is occurring. Under that circumstance, the voltage you read on it will be exactly what the PSU is putting out at the +5V common distribution point.

If that voltage is nearly as low as that read on your motherboard, then your PSU is not powerful enough. If it reads near to 5V and distinctly higher than what you read on the motherboard, then the ATX connector is your likely suspect and you can benefit from this modification.

One last note of caution. Some people resort to a dangerous practice of simply turning up the +5V output from their PSU, assuming it is adjustable, to keep it at specification when their CPU is working hard. The problem with that approach is that once their CPU goes back to idle, the +5V output will jump up, sometimes to a level that will damage other components in the PC.

“Is it my imagination…”

or do my fans speed up and slow down, depending upon what I am doing with my PC?

No, it’s not your imagination, but a useful indicator of how hard your PSU is working. The +5V regulator in you PSU shares many of its components with its +12V regulator. This is done to keep the cost down. When your PSU is working at, or near its maximum capacity, the drive to the +5V regulator goes up and down to accommodate the current drain placed upon it by your processor. That increased drive makes the +12V go up and down also. As the +12V varies, you fan speed will vary also. So, now you know…

AMD is “demoing” 45nm quad cores. The demos are doing little more than showing that these things work. What is more interesting are AMD’s expectations of the eventual speed of these chips. Here’s one estimate of “at least” 2.8-3GHz. Here’s Read More

How To Get A Faster Tortoise

As you might have noticed, Vista isn’t selling all too well. Based on some numbers popping around, somewhat less than half the computers sold last year came with Vista, with business users in particular having a low take-up rate. A Read More

I’ll start this review with a wee bit of back story: