Finding the Terminal Block pictured in the original Tip has been a stumbling block for those of you who don’t have a marine store handy. I originally saw something like what you see pictured below by someone who was selling the Fan Bus. These are the same kind of connectors on your stereo. Recently I found these parts in my local Radio Shack and set about to develop an alternative approach to solving wire clutter. 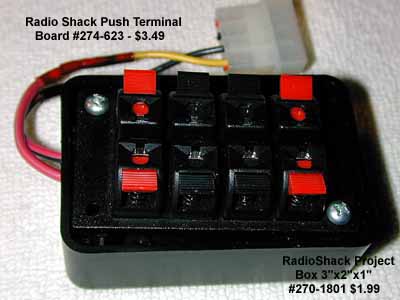 The parts are easily attainable – included in the above picture are the catalog numbers. The picture below shows the back of the Terminal Board. What you have to do is connect all the red terminals on one wire and the blacks on the other – I have marked the red terminal points with a “+”. Then drill two exit holes in the Project Box for the wires and solder on a four pin connector. Mount in a convenient location and all you have to do is strip the fan wires, push the terminal open and then close. 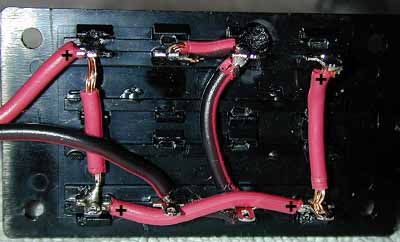 What’s nice about this solution is that you don’t have to use spade terminals – bare wires are fine. You can more easily change fans or anything running on 12 volts with these push terminals.

Every time I open my case I am greeted with a tangle of wires that makes me crazy. I don’t have a lot of fans – a 120 mm in the front, 92 mm rear, Lasagna Cooler on the BX chip and a 50 mm on my Matrox G400. All of them come with the usual 4 pin hard drive connector – you end up with a daisy-chain such as you see in the picture below. 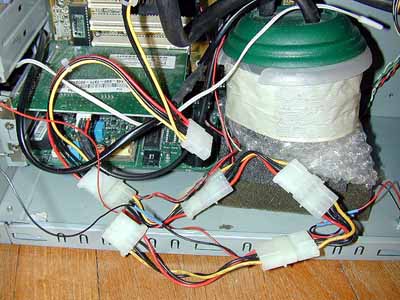 Like many of you, my case is open about as much as it is closed – there’s always something to tinker with or something to test out. When I take a card out invariably I get tangled up in the rat’s nest of dangling 12 volts wires. ENOUGH! On to Radio Shack to get some parts. 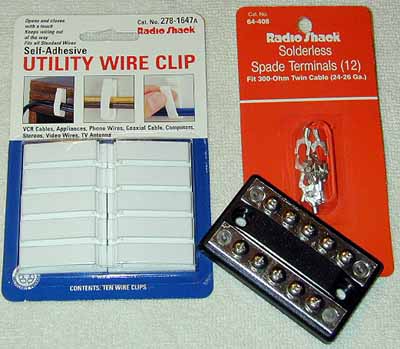 The parts pictured above are pretty standard items available anywhere – wire clips and spade terminal connectors. What I did not see at Radio Shack was the kind of terminal bus I wanted – one that would have both positive and negative connections. I found the terminal block in the picture in a marine store – about $12. Total overkill – I’m sure you could find something as functional cheaper but my local hardware and auto supply stores did not have anything like it.

This is the GenXTEch Case that I reviewed HERE – I decided to mount the terminal block on the side of the radiator housing, as shown in the picture below. The rest was easy – I methodically clipped off the 4 pin connectors, soldered 2 conductor wire on the remaining fan wires and sealed it up with heat shrink tubing. After figuring how much wire each fan needed, I cut to length, soldered on the spade terminals and attached each one to the terminal block. 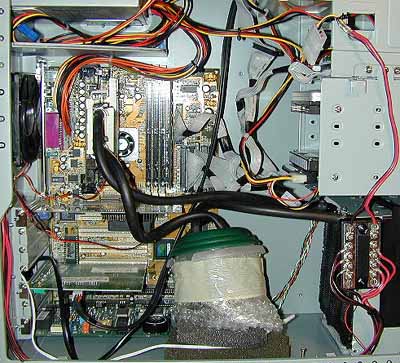 Then I soldered one of the 4 pin connectors on the wire you see on the left hand side and ran it up to a power supply connector. I used zip ties to attach it to the side of the drive case. I used the wire clips along the back side and bottom of the case to hold the wires in place. The clips are adhesive backed and so you can set them in any flat place in the case.

When I do it again, I think I’ll use telephone wire instead of the 2 conductor 18 gauge wire used here – smaller in diameter and I don’t think you need 18 gauge – the fan wires were pretty thin and telephone wire would be thicker. You can also get telephone wire in 2, 4, 8 etc pairs so you can run a lot of stuff in one wire.

Thank you all for reporting the codes printed on your TBirds. I think we can draw some general conclusions from the data: 1. Codes matter. 2. For the most part, different rated processors are getting different codes. 3. For the

The Evil Empires are getting into the PC business. Just to refresh your memories, here’s what the architecture of the XBox2 is supposed to look like. Maybe multiple 3.5GHz processors is a pipedream, but IBM can make 2.5GHz processors today,

Just Not Good Enough For Overclocking

I got this email yesterday: I just returned from my local computer fair (here in England/UK). The only low speed Tbred Bs I saw were XP1800+, but they were Brown (seems unusual from what I have read elsewhere) AXDA1800DUT3C (looks