A couple of years ago, when I was moving out from home to live in college halls, I was trying to figure out how to get a computer that I could bring with me and use for studying. I had three problems facing me:

On the first day whilst calling around and hunting for a cheap computer, I was struck with good fortune when I found out that a friend of mine happened to be throwing away an old computer. He said it was broken, and even if it could be fixed, it was so old and slow that it would barely be worthwhile. Apart from being broken, it sounded perfect! I didn’t need anything fast, I just wanted a computer that could word process and open websites.

I picked up this computer and started trying to figure out what was wrong with it. Thankfully this didn’t require a very thorough investigation – there were big black burn marks on the power supply. After a quick trip to the shops to get a power supply, the computer booted up fine. So, the main problems were solved – I got a free computer! (Minus £10 for a power supply).

However, an attempt at lifting the computer confirmed that there was still a problem remaining – it weighed like an elephant. It was housed in a massive steel tower that appeared to be engineered to withstand a nuclear attack. I would have to put it in a smaller, lighter case if I wanted to carry it with me, unless I could get hold of a camel or something. But I couldn’t find any camels so I went looking for cases.

I thought about using a cardboard box but that didn’t seem like a long term solution. Then there was a plastic storage box – but that was too bendy and not the shape that I wanted. I looked at a steel oil can – but it was a little too small to fit the motherboard. So I settled on making a case out of wood – that way I could measure it out and try to make it the minimum size possible.

This proved to be more difficult than expected – like some kind of 3D puzzle. In the end I decided it would be better to have it slightly too big than to have it too small and find that it doesn’t fit together at all. I arranged all the computer components out on a sheet of wood (scavenged from the back of an old bookshelf that I found in our garage… I hope it wasn’t an antique) to get an idea of how big it ought to be. I marked out the shape, added a centimeter in each direction just to be safe, and started cutting it out.

After I’d finished cutting out the wooden panels and glued and screwed it all together, I realized that by some strange fluke all the cables and connections were on the top of the case rather than the conventional rear position. This actually turned out to be very convenient – it’s so nice to have all the plugs and connections readily accessible – I’m surprised that no commercial cases have tried this, although I suppose style takes priority over a minor practicality for most people. Of course, I usually tout this ‘innovation’ as being a result of my ingenious foresight and intricate planning.

Here’s a shot of the finished computer: 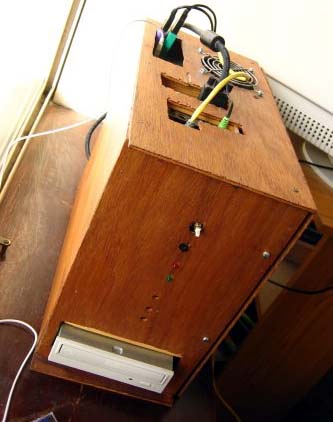 It’s not exactly an exhibition of master craftsmanship, but in my defense I was in a hurry to get it built and put all the components in it before I left. With a few more days I’m quite sure it would have looked like a Bechstein piano. As it turned out, I had some spare time in the end anyway, so I varnished it.

The optical drive slot is way too big, but this was kind-of intentional because I wanted to be able to swap drives easily. You can see how the door doesn’t fit on very snugly, that’s because I used a bicycle inner tube for the hinges: 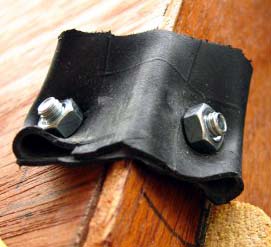 The side panel is held closed by this cupboard clip thing that I found in my toolbox: 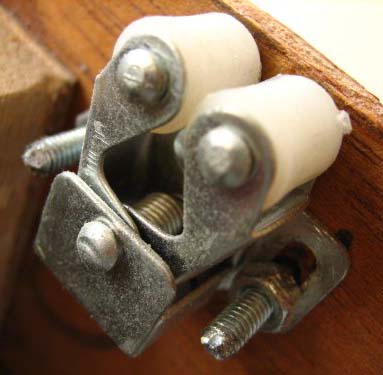 I must’ve used about five refills on my glue gun to stick various things in place. A couple uses for the glue gun: holding the power buttons and LEDs in place and routing cables around inside the case: 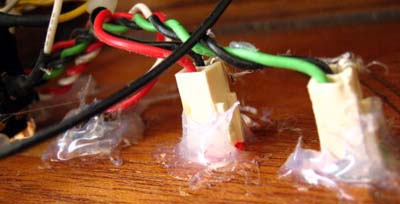 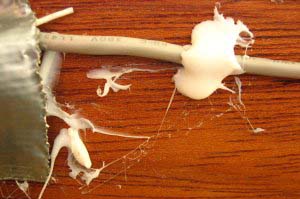 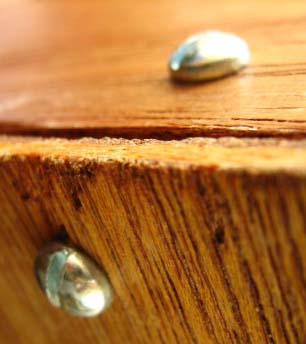 The next shot is of the main innards, showing where everything goes: 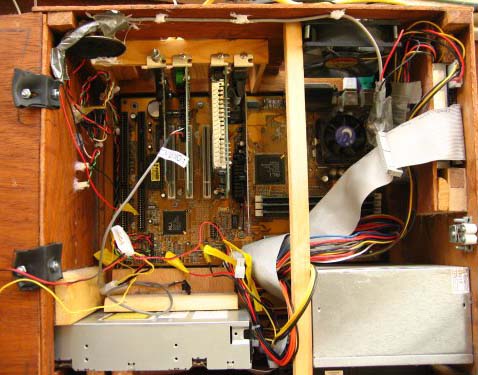 The PCI and AGP cards have a little wooden railing to secure them in place – the nice thing about it being soft wood is that you don’t have to worry about getting the measurements right for the screws. You just stick in the cards and screw them in afterwards with self tapping screws.

There are two hard disks, one 10GB and one 4GB; the bigger one can be seen on the right near the CPU, the smaller one is hidden at the bottom in-between the PSU and the case.

For anything that wouldn’t screw into place, I just used duct tape or the glue gun. The cross beam adds quite a lot of rigidity so that it can be used as a foot stool without deforming too much (and the fan even keeps your feet cool!). Unfortunately this often results in accidental removal of the monitor cable or the mouse and keyboard.

This is the foot chiller/ventilation fan: 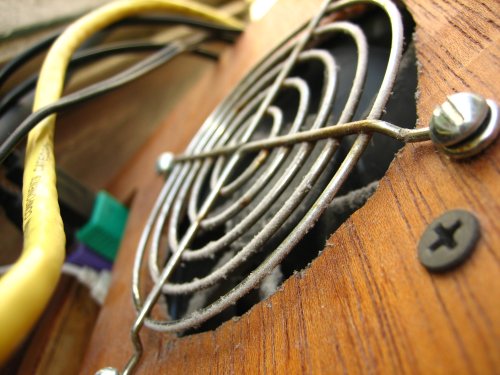 Here’s a view of one of the carefully ‘crafted’ cable outlet holes in the top the case. These were drilled and then filed down to tidy them up – but they didn’t turn out so tidy: 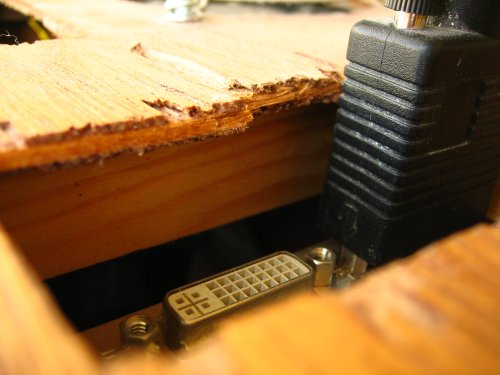 As an aside, to my delight, there were even some overclocking options on the motherboard: 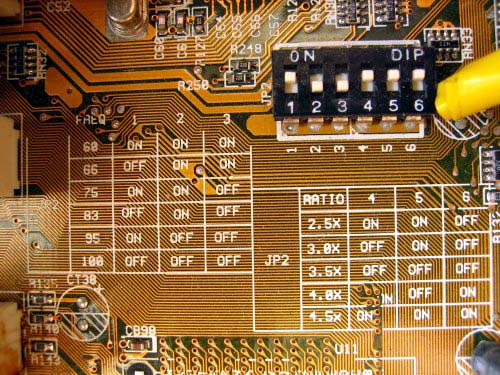 The maximum I could put it at was 450 MHz, but this 50 MHz increase resulted in random resets, so I had to switch it back. I even tried 428 MHz but that didn’t work either – the AMD K6-II has to be the worst overclocking processor ever.

Here’s a shot of the finished computer set up in its current home: 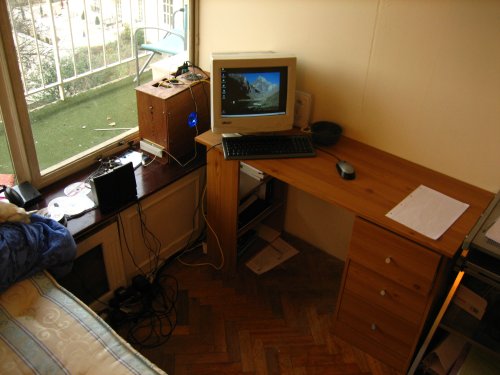 And here’s a shot of a blue LED fan that my flat mate gave me when he got it free with an order for a couple LCD screens: 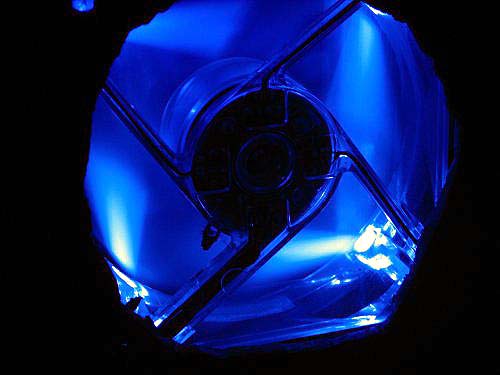 I am ever so slightly jealous of his dual 19″ LCD screens when I compare them to my 15″ CRT – but then he doesn’t have a cool background picture of some Bolivian mountains on his screens.

So far the computer has been very handy – it does what I need it to do most of the time, although it can be a lesson in patience sometimes. And by that I mean I occasionally perform impact tests on it with my fists, particularly when it tries to load webpages that are unnecessarily flash-heavy or have other frivolous, useless plugins or animations. Using a rubbish computer seems to be a good way to distinguish between a well designed website and a terrible one.

Well, that’s all, I hope you’ve enjoyed reading this or found something helpful.

Next week, there will no doubt be tons and tons of hype about the GeForce3. We’ve chosen not to be a part of that, and this bothers some people. Their comments boil down to, “I agree with you, but review

Got the hots for the KG7 because it has four DDR memory slots (as opposed to everybody’s else’s two)? I hope you didn’t buy three or four sticks of memory for it yet; there’s a reason why all the other

I said yesterday that MS has an unpleasant surprise for those who think they’ll get Vista cheap by buying OEM. Well, MS has figured out a way to justify charging twice as much for the retail as the OEM copy,