Well dear readers, they come from a lot of great overclockers… And often they come from the workshop of Overclockers.com members! Tonight I’ll be attempting a new record in the single core PCMark 2005 rankings on HWBot.org, and within this article are some pics of the equipment I’ve put together to get the job done.

But first a little back-story to bring our readers up to speed on what the Overclockers Benchmarking team has been up to lately. As always the team has been benching hard, but lately several of its members have particularly stepped up their game to new levels in the fight for top PCMark 2005 records. For a quick rundown, PCMark 2005 world rankings are broken down by the number of physical cores, and Overclockers.com holds the following world ranks currently: 1st place in 8 core, 2nd place in 6 core, 14th in 4 core, 2nd place in 3 core, 4th place in 2 core, and 2nd place in 1 core. While those scores are spread across only a few different Overclockers members, many more members have contributed to the scores through coaching, pushing their own bests, and sharing their tweaks with the team to get every last drop of performance – it takes a team to dominate, and we’re all pushing hard!

Tonight however, our focus is specifically on the single core record. I currently hold 2nd place with a 5GHz Sempron 145, exactly 700 points behind the 1st place record of mtech’s 7.3GHz Pentium 4 651. In my effort, all components have been purchased specifically for this task, and other Overclockers.com members have sent me additional components to assist me in getting there. PCMark 2005 is a whole system benchmark, so it takes more than just a strong CPU or GPU to take first. Thanks go out to all the forum members who helped advise me on components, or even shipped me hardware!

To get ready for my run tonight, when I’m done with this article I’m preparing dinner, but after that I’ll be pretesting the motherboard. For the purpose, I’ve acquired a Lanparty DK 790FXB-M2RSH from eBay. The Sempron 145 is locked at a max multiplier of 14, so in going after 6GHz on the CPU I’ll be hoping to hit an FSB on the board of 430MHz – default FSB clocks are 200MHz, so 430MHz is screaming. However, the Lanparty M2RSH has been all the way up to 502MHz so it is a great tool for the job.

Once the board is pretested, I’ll be covering it entirely in petroleum jelly – it repels water and that is the quickest and easiest way, in my opinion, to protect the board from frost, condensation and melt. After that I’ll be setting up a new Vista 64-bit install as the OS platform for the record, while I already have a 7 64-bit install waiting in the wings as well – I’ll be switching out as necessary to ensure I obtain the highest score possible. Then once everything is ready, it’s just a matter of pouring the liquid nitrogen, finding the high CPU clocks I’m targeting, and dialing in my RAID controller’s storage performance to get the most out of 4x Maxiops in Raid0.

What’s the gear look like to take a 1st place record? Check it out below. 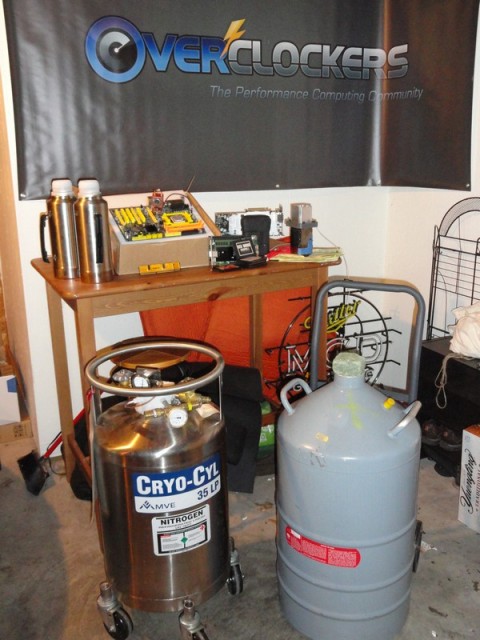 This Is How We Rock 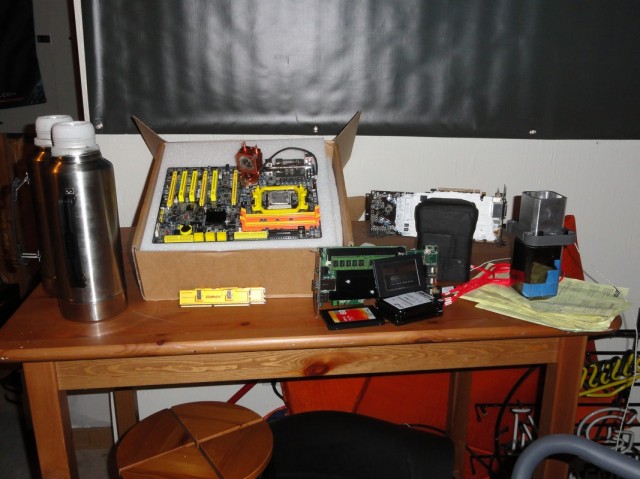 The Hardware For the Job 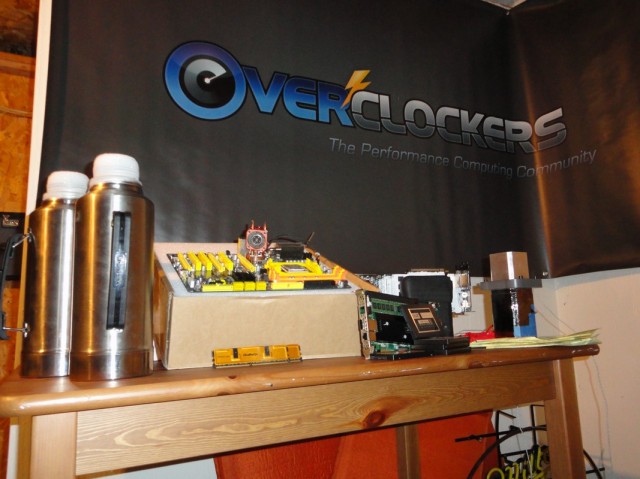 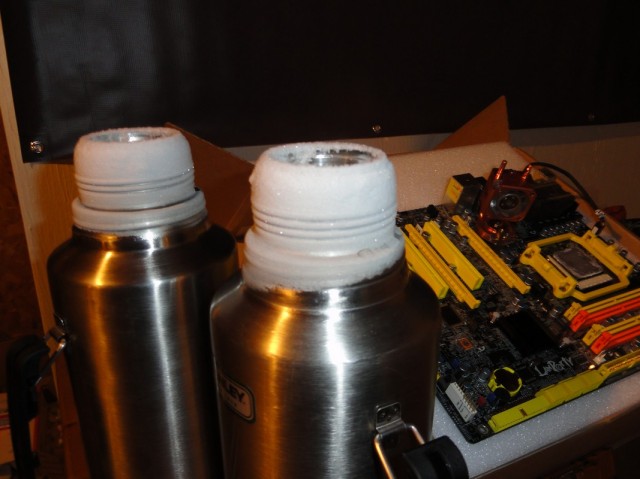 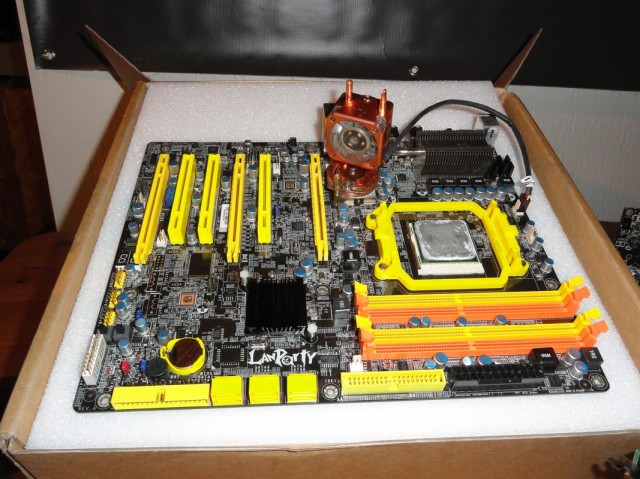 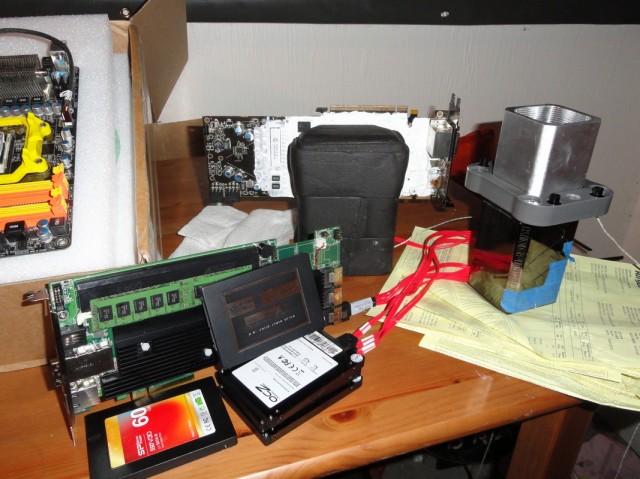 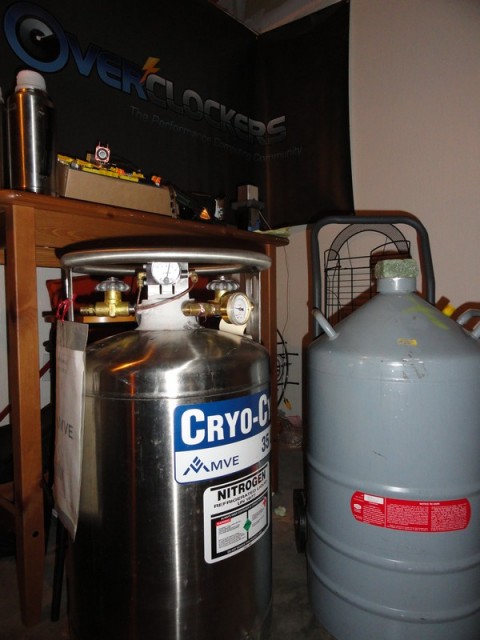 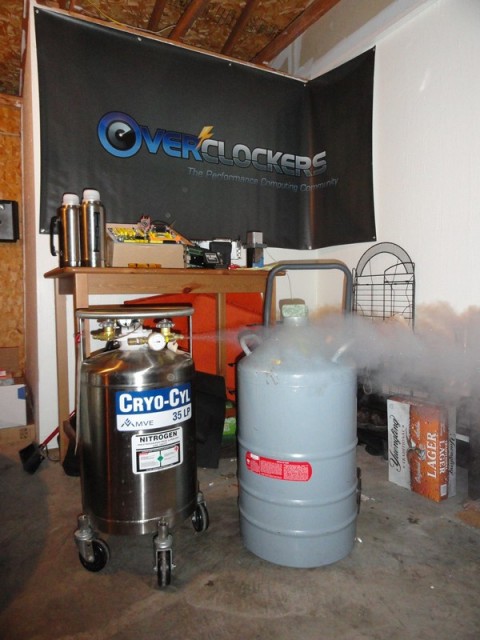 Burning it Off Just for Kicks!

Look for more updates through the night, and I’ll post the livestream so you can watch live in the comments below as I go for the gold! Also look forward to more updates this weekend, when Janus67 comes to visit as we tagteam the ‘bot to push for more great scores!