Some may have noticed that P55 (Lynnfield) systems seem to overclock memory “better” than X58. I did. Most notably, memory that would barely run 1100 MHz on X58 for me was magically running over 1300 MHz on P55 after some tweaking. If all other things are equal, that would be amazing, so we’ll take a very quick peek at how memory performs on both platforms. The test setups are:

Same hardware/software used in both setups:

One of the first things to note is that on X58, the Uncore multiplier is linked to the memory ratio. Uncore must be 2x DRAM ratio or likely the board won’t POST. More Uncore is normally a good thing, but the higher the Uncore is to start, the faster you reach the limit. For me, that limit is about 4400 MHz max on ambient cooling and even slightly lower when using high BCLK and/or really tight memory timings.

To illustrate this, in the images below, note that the Uncore multi is 4x (2x and doubled) the “RAM” multi. I’ve come across one or two BIOS’s for this board that will let it boot with ((4x memory multi)-1), but nothing that will let it run 18x Uncore with 2:10 or 2:12 ratios like the P55 does. 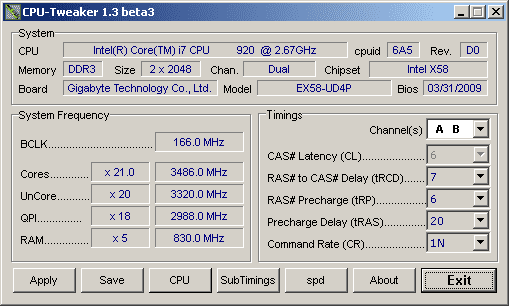 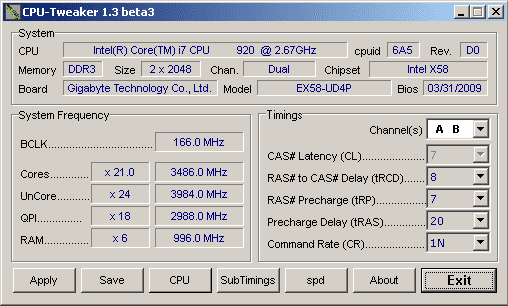 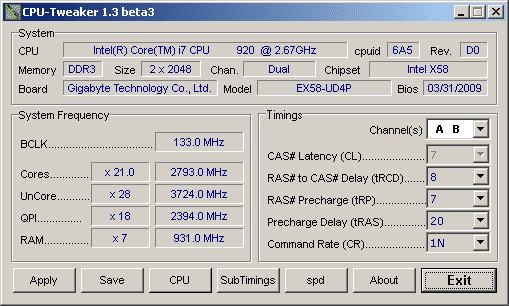 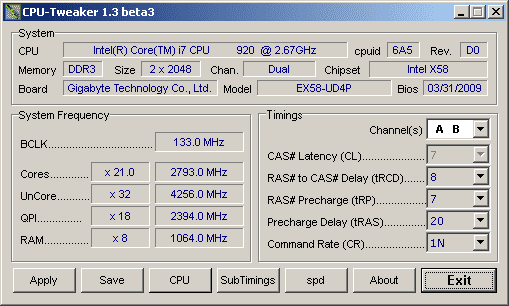 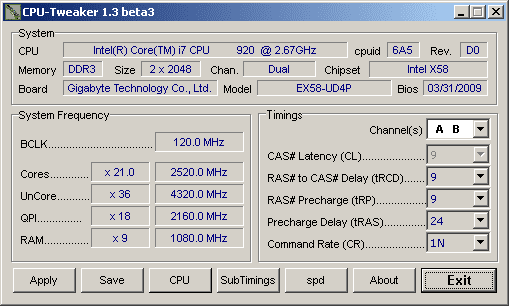 So, on X58, you can’t run big memory ratios without big Uncore multipliers to go with them. On X58, Uncore ratios for 2:10 and 2:12 memory would be 20x and 24x minimum respectively, so anything over 2:10 would really limit the BCLK that could be run and in turn, limit the memory speed.

Say we have a 4400 MHz Uncore limited by this particular IMC. Using the 2:12 memory ratio, the Uncore multiplier would then have to be at least 24x. To keep under our limit, we would need to run no more than 183 BCLK (4400 MHz/24). At 183 BCLK the memory would be at DDR3-2196 (183×12), which is about as fast as these sticks have ever gone in the board. I simply thought that was just the best the sticks could do until P55 showed up. With a fixed Uncore multiplier regardless of memory ratio, all of a sudden, the Uncore wasn’t a limiting factor.

So, with the IMC limits on the X58/Bloomfield and the required high Uncore multipliers that go with high memory ratios, there is somewhat of a cap on just how high memory will be able overclock. P55 generally has more room to breathe where memory overclocking is concerned, but with that said, it does take faster/tighter memory in P55 to help make up for the lower inherent performance. Take a quick peek at the Core i7 X58 vs. P55 thread (https://www.overclockers.com/forums/showthread.php?t=619545) to get an idea of how they compare overall and you will see that P55 is definitely behind the more pricey X58, but certainly not by an overly wide margin.

There is positively nothing in-depth or extensive done here, just some quick runs with Everest for a general idea of memory performance with the same timings on each system. For now, these are simply 1.66vDIMM and primary timings set in BIOS. All other timings shown are AUTO settings from BIOS. CPU Tweaker is solely used to show all timings, it was not used to alter timings in any way. 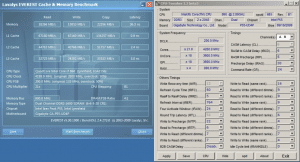 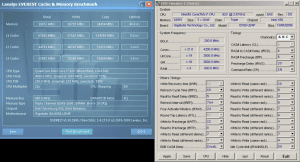 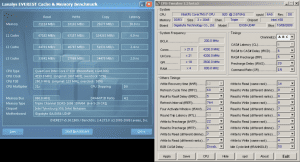 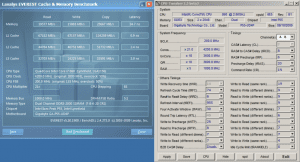 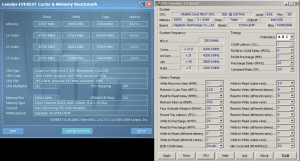 I will note that with 6-6-5 timings and 1.66vDIMM, both the P55 (dual-channel) and X58 (tri-channel) overclock memory to about the same speed. At higher speed (>1000 MHz) and 7-8-7 timings, P55 goes a good bit further on my setups, but others have reported the similar memory overclocks over 1000 MHz on both X58 and P55. That leads me to believe it could come down to memory brand and board BIOS for how memory is going to respond in each system.

In a nutshell, much higher than 1000 MHz, P55 has an advantage in the memory overclocking department. P55 will take the sticks a little higher and a little tighter (with increased voltage of course). P55 can actually run these sticks very high (1300+ MHz 9-9-9-24) when tweaking B2B latencies, but the substantial gain in memory speed is not enough to overcome the reduction in performance from the slacked timings.

For more realistic daily operating, as is evident from the previous screens and the Core i7 Head-to-Head testing, even 1000 MHz 7-8-6 in P55 doesn’t match 800 MHz 6-6-5 of the X58. It stands to reason that anyone going with P55 would be better off with the fastest memory they can reasonably afford or at least sticks that have a proven record of reaching 1000 MHz or higher when overclocked.

What real world results does the slower and faster memory yield?

I will try to play with some more when I can and include other tests. I didn't have much time when I started, that's why it's a "quick peek" ;) It seems like the upcoming 1366 stuff could be noticably different with memory compared to 45nm, but we'll need to wait and see what retail processors and official supporting BIOSes do.

additionally i found this here:

I actually like that benchmark, it's nice and quick :)

I actually like that benchmark, it's nice and quick :)

yes, same here
i originally found it at www.hwbot.org

I wish I knew more about Intel chipsets, getting a little confused by the Intel terminology :p

How do you figure? I saw nothing in the article indicating the systems were unstable. Not that they necessarily need to be to compare memory bandwidth. Your conclusion seems a bit odd; why is this ridiculous exactly?. Please elaborate on why you have such a problem with it. :shrug:

"Stable" is a vague term that can mean different things based your desired use, 24/7 stable, Everest stable, SuperPi 32M stable, etc. They only need to be "stable" for what you are doing. So whether those settings are 24/7 stable or not, this is still a valid comparison as long as the Everest bench finishes and there are no crashes or errors.

"Stable" is a vague term that can mean different things based your desired use, 24/7 stable, Everest stable, SuperPi 32M stable, etc. They only need to be "stable" for what you are doing. So whether those settings are 24/7 stable or not, this is still a valid comparison as long as the Everest bench finishes and there are no crashes or errors.

the other part is that 1000Mhz memory is fairly easy to get 24/7 stable so Im not sure what that post was about either.