SUMMARY: More on this later – first some questions. 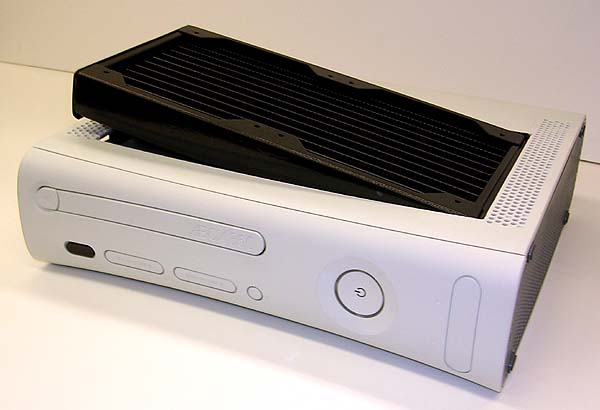 If you have an XBOX, it’s a hot product – both figuratively and literally. What I’d like to hear from some XBOX owners is your experience with heat – has this been an issue for you? Have you experienced any heat-related issues affecting your XBOX’s performance? Appreciate your views – thanks!

Reader’s responded with some experiencing problems and some not – selected excerpts below:

“I would just like to say that I’ve gone through 2
xbox360’s now that have had heat problems and freeze
up, even in the middle of a golf game. Ive exchanged
one in on the 30 day best buy warranty and after that
one had heating issues also I gave up on the xbox
completely.”

“I have had my xbox360 since launch roughly. I say roughly because even though it was pre-ordered, my order was not fulfilled until the end of January. I have had many hours of enjoyment from the box and did not encounter any problems heat or otherwise until recently. You might ask what changed? Gears of War is what changed – that game would make my box overheat faster than anything else before it.

My fix was the Nyko Intercooler. Yes – I read all of the “bad press” regarding the intercooler and it causing issues with the xbox so I rewired it before I ever plugged it in. My intercooler is powered externally off a 9v dc power brick that I had laying around. Now it is silent and the box never overheats. Perfect.

My only gripe is why should I have to go through all of those steps to make this thing operate as advertised? I mean I love the xbox and all but they were very over optimistic with their cooling solution that they came up with.“

I’ve had an Xbox360 since day 1. Yes it’s hot. The fans in the back blow some hot air, Like a hair drier. It has worked perfect and have no complaints.

There is another after-market cooling solution called the XCM 360 in addition to the Nyko. The availability of these products and forum comments on XBOX cooling indicates that for some users there have been significant cooling issues.

I have to agree with Kevin – does it really cost XBOX that much more to include a decent cooling solution?

Some XBOX consumers have had problems with overheating and we thought it would be an interesting project to see what a thermosyphon cooling solution would do compared to the stock XBOX heatsink.

The following comparisons were run with the stock heatsink in place, then with a thermosyphon (pictured above) cooled by the XBOX’s stock 70 mm fans and finally with 2 120 mm fans pulling air through the XBOX as pictured below (CPU Temps were measured by a thermocouple, diamond thermal grease was used): 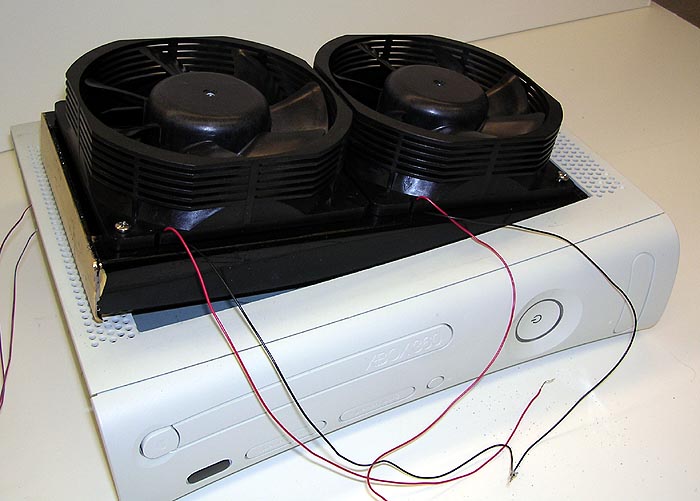 Shown below are CPU temps over ambient – the thermosyphon is a clear winner compared to the stock heatsink; what’s interesting to note is that the 2 120 mm fans, while delivering better cooling, is not substantially better than using the stock 70 mm fans (an external power supply was used to vary voltages). 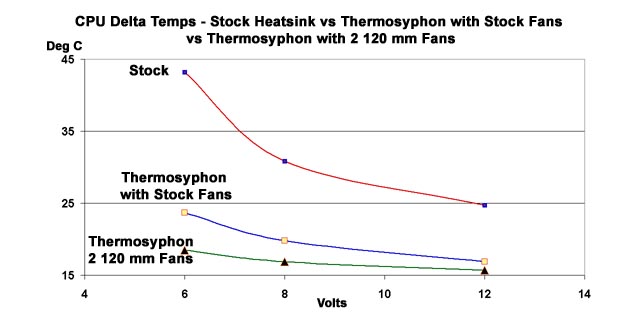 This chart is the same as above but with no correction for ambient temps – note that the thermosyphon at 6 volts cools as well as the stock heatsink at 12 volts – virtually the same cooling at substantially lower fan noise: 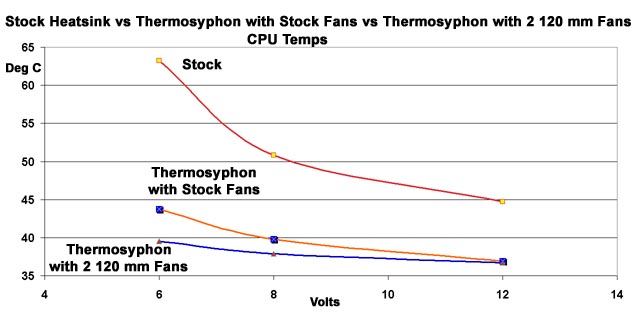 We used a single large boiler to cool both the CPU and GPU:

Shown below are stock heatsink temps vs temps using 2 120 mm fans on the thermosyphon. Running both GPU and CPU off one boiler may not be the best way to do this as the temp differential is not overwhelming. 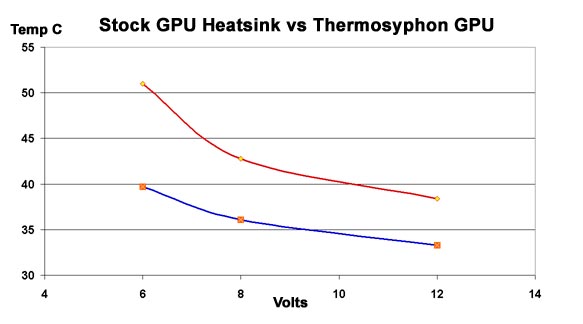 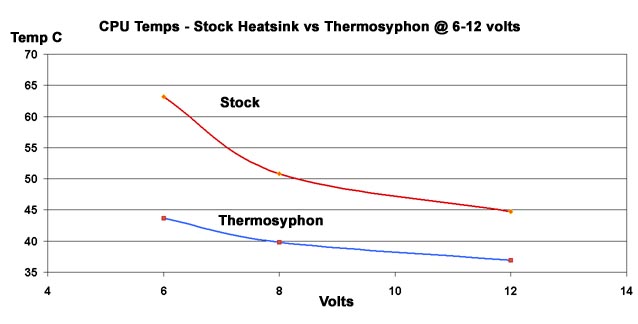 In looking around at water cooling the XBOX, the thermosyphon delivers substantially the same performance at low cost with far less complexity (no waterpump, no maintenance required).

Overall, this was a fun project – a thermosyphon cooling option might be viable with a smaller condenser so that the whole solution fits inside the XBOX.

Yet another Internet pricing error, yet another tumult. This time around, Best Buy erroneously listed a $400 video card for $130. I’m going to give those who feel horribly injured by this a chance to speak. Be forewarned that you’ll Read More

AMD cancels a Kuma dual-core and all Phenom FX processors AMD has issued a “denial”, but if you go to that link, go to this one, too and judge for yourself how seriously this “denial” should be taken. The fact Read More

At last! A chance to be an equal-opportunity offender! 🙂 From here: In any event, Sanders said that at least Intel will not be able to tout larger megahertz numbers. With Hammer debuting at speeds of at least 2GHz, the Read More