I was recently fortunate enough to receive a HP xw8000 Workstation. The xw8000 uses dual Prestonia core Intel Xeon processors that fit into Socket 604. The Prestonia core is the Xeon equivalent of the P4 Northwood, so it is built on the same 130nm process and has the same 512 KB L2 cache, with 1MB L3 cache added for good measure on some models. The particular processors I have run at 3.2 GHz and feature the L3 cache. This means that they will have heat production somewhere between a 3.2 GHz Northwood and a 3.2 EE.

I was very disappointed with the noise level of the system when I first turned it on – it was very loud, I estimate between 55 and 65 dB. In other words, loud enough to be a distraction no matter where I was in the room. I was able to replace the 120mm case fan with a quieter model that I happened to have sitting around. However, I was not satisfied with this; the CPU fans were still very loud.

At first I thought I might be able to simply replace the fans and that would be all that was neccessary. However, in looking at the HSF units, I saw that they were not the best in the world for dissipating large amounts of thermal energy. No doubt they were technically sufficient for the task, but the only way to keep the CPUs cool at high load was to run the fans at full blast, and as a consequence, high noise.

The design of these heatsinks is unusual enough that I have drawn a rough diagram of their operation: 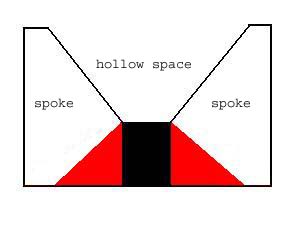 At the point where the center of the CPU’s heatspreader contacts the heatsink, there is a large solid column of metal (shown in black) that extends about half way up the height of the outside of the heatsink. Coming off this are radial “spokes” about 2mm wide with about 1mm of space between them (shown in white/red).

There is a hollow space, so to speak, between the top of this column and the fan. My concern with this design is that it is entirely possible that air will not circulate very well near the bottom of the heatsink, where the radial spokes join the central column (shown in red on the diagram). Coupled with a relatively low surface area, it is no surprise to me that the fans were spinning at full speed most of the time. I decided that these heatsinks would have to go. 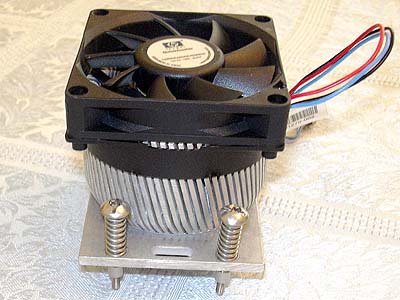 I saw that the CPU sockets and HSF units were following the Intel specs for Xeon heatsinks. This was fortunate, and I figured it would be fairly easy to get replacement heatsinks. The ones I wanted to use were discards that were designed for the HP xw8200, which uses the Irwindale 90nm core (the Xeon equivalent of Prescott).

Using free parts is a good way to save money, and the heatsinks are of a much better design. Not only do the Irwindale heatsinks have to dissipate more heat, as a Prescott compared to a Northwood, but HP also wanted them to run more quietly. This means that the total surface area is significantly greater, the base is made of nickel-plated copper instead of aluminum, there are two heatpipes to more rapidly spread out the heat generated by the significantly hotter-running Irwindale processors, and the fans are side mounted and quieter even at full speed.

These seemed like the perfect solution to getting my xw8000 to run more quietly, without risking damage to the processors from overheating. 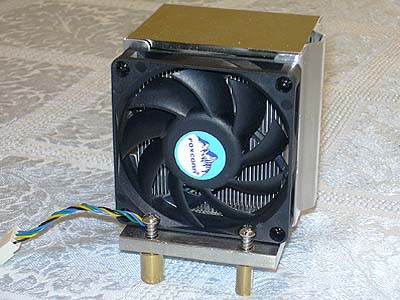 Unfortunately, installing the new heatsinks was not a simple matter of unscrewing the old ones and exchanging them. Several barriers stood in my way.

First, Intel changed the mounting mechanism specification for the 90nm Xeons. Instead of the motherboard supporting the heatsink’s standoffs, and only the mounting screws connecting to standoffs on the chassis, the standoffs are now integrated into the heatsink and connect directly to the system chassis.

The large brass standoffs on the new heatsinks had to come off. Fortunately, this was not difficult. After taking out the mounting screws (which actually screwed into the standoffs), I was able to simply twist off the standoffs with pliers. The small springs on the screws are simply there to make the screw come up out of its hole when unscrewed. This makes removing the heatsink from the system much easier.

Second, the type of mounting screws that HP used for the new heatsinks had a larger thread size than the old heatsinks, so I would have to use the old screws.
{mospagebreak}

I didn’t think this was going to be a big deal until I realized that the old screws had a head diameter much larger than the new screws, and that the new heatsinks had the rear screws sitting between some of the heatsinks fins, so that the old screws were too wide and did not fit. The old screws also had large springs that exerted pressure on the heatsink to hold it in firm contact with the CPU, but that did not contact the motherboard directly.

This was another reason to use the old screws with the new heatsinks; the old method of keeping the heatsink in pressure contact with the CPU could be retained, which would prevent there being a large amount of pressure applied directly to the motherboard where the standoffs would otherwise contact the board. Plus the standoffs were too long anyway, and they would prevent the heatsink from making contact with the CPU.

The screws on the front of the heatsink could be used as they were, despite the larger head diameter, but the rear screws needed to have the heads ground down to a diameter that would fit in the space provided at the back of the heatsink between the fins. This was not an overly difficult task, but I did wear down the stone on my grinder about an eighth of an inch on the hardened steel screws! Good thing there were only four of them! Below, the new screws are on the left, the old screws in the middle, and the ground down screws on the right. 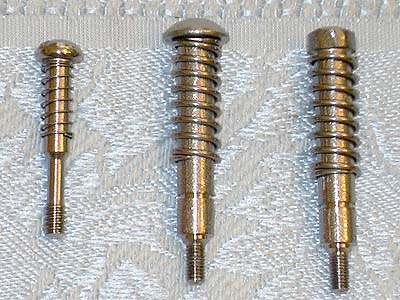 I was lucky that Intel had not changed the positions of the screws and that HP had made the screw holes on the new heatsinks big enough to accommodate the old screws. Assembly after this point was fairly straight forward.

Although the new fans used the four-pin connector instead of the more common three-pin (the extra pin allows for more precise control of the fan speed), they still worked with the old three-pin headers on the board. In fact, the connectors on the fans are designed to work in either three- or four-pin mode. I had to extend the length of the second processor’s fan, because the header was located near the back of the board by the AGP connector. This was a simple matter of cutting off the four-pin connector and soldering on a three-pin connector with longer wires.

After the new heatsinks were installed, I fired up the system to find that it was much quieter than it had been previously. Now, even at high load, the CPU fans are almost inaudible. The cooling capacity of the new heatsinks is also much greater because even at high load, the fans don’t spin up to full speed and the heatsinks do not become uncomfortably hot. I can hold my hand on them and they are warm, but not burning. 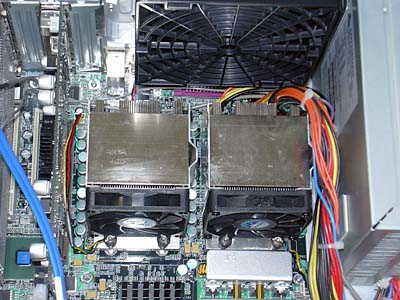 I didn’t expect there to be so much to do in order to get Xeon heatsinks to work with Xeon processors, but this was a rewarding experience for me. None of it was particularly difficult, and it only took me part of one afternoon to accomplish. What’s more, I now have a quiet dual processor system!