An OK heatsink from Romania – Joe

SUMMARY: Interesting design – Performance will depend on how much noise you can tolerate. 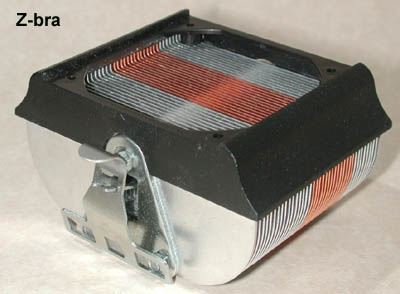 The good guys at 3aCooler were nice enough to send a sample of their Z-bra Socket A heatsink for a test spin. 3aCooler is a new Romanian company producing heatsinks, and the first I have tested from this country.

The name refers to its construction (until you look at it, you wonder…) – the part of the heatsink that contacts the CPU core is made of copper fins, the rest are aluminum. The heatsink is made by bolting this sandwich of copper and aluminum fins together, then machining the base for a smooth finish. This is similar to how Zalman constructs its heatsinks. 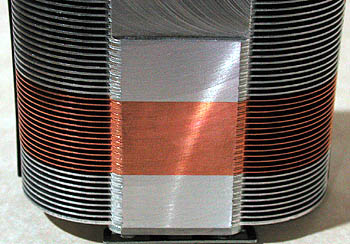 The clip engages all three socket lugs – always a plus – and it can be mounted without a screwdriver. I did find it fairly stiff – engaging the rear socket lugs required some effort, and I would be concerned that by engaging the rear lugs and then rocking the heatsink towards the front, a fragile CPU core could be compromised. Since this is a very early version, production units may have a “kinder” clip.

I used a 60mm Delta 38 to test this heatsink – the sample I received did not ship with a fan. I measured its noise at 67 dBA with a Radio Shack sound meter 8″ from the fan’s intake – loud by any standard, as many former Delta 38 users know.

The Z-bra was tested on the CPU Die Simulator which gives results that are unaffected by motherboard influences.

The Z-bra is OK for Socket A cooling, but performance will be affected by the 60mm fan choice – more noise, better performance.

Thanks again to 3aCooler for sending this our way. At present, the Z-bra is not widely available. Interested vendors can email Calin Barbulescu for availability and pricing information.