Over 80 new Z690 motherboards are about to release in conjunction with Intel’s 12th Generation Core processors, dubbed Alder Lake. This is a staggering amount of new hardware, and to ease the burden of trying to research all this new tech, we have comprised a list of some of the most recent motherboard announcements. Before we get to that, we will cover what is new with Alder Lake and what makes it so different from previous generation CPUs. We will also discuss the major changes the Z690 motherboards bring to the market.

Intel’s 12 Generation Core processor, Alder Lake is set to launch on November 4th. What makes this processor so unique? It’s the first CPU to feature two very different core architectures under one lid. Each 12th Gen processor will feature Performance cores, designated as “P” cores, utilizing the Golden Cove architecture and Efficient Cores, or “E” cores, using Gracemont architecture. This hybrid design is similar to ARM’s big.LITTLE concept and provides power and efficiency depending on the demand. Alder Lake will also support native PCIe 5.0 and in doing so feature a total of 20 PCIe lanes with 16 dedicated to PCIe 5.0 and four additional lanes of PCIe 4.0. Naturally, this all requires additional real estate so Intel is updating the Socket to LGA 1700.

This is where the Z690 motherboards come into play, providing PCIe 5.0 support as well as DDR5 memory. Some boards will still support DDR4 memory so be sure to double-check what you are buying. This is also partly why there are so many new motherboards getting launched. So, what’s so special about PCIe 5.0? Well, it allows double the bandwidth of PCIe 4.0, from 32 GBps up to 64 GBps. While most current devices are unable to take advantage of this, it’s only a matter of time before they catch up. The other major update Z690 series motherboards bring is support for DDR5. Unlike all previous generations, it features on-board voltage regulation, reduced power consumption, On-Die ECC error correction, and a higher base frequency than DDR4, providing a more efficient system.

NOTE: There are rumors of an MSI Z690 GODLIKE EATX motherboard but we have not received official confirmation.

You can find the boards at Newegg.com

ASUS Z690 series motherboards and 12th Gen Intel® Core™ processors herald the arrival of the next generation of high-speed computing with support for PCIe® 5.0 and DDR5 memory, next-level connectivity, robust power delivery and cooling, and artificial intelligence optimization. This new ASUS platform is designed to extract every ounce of performance from the latest Intel Core CPUs for gamers, creators, and users of all kinds while offering a variety of aesthetic designs to suit every taste.

And click here to see the boards at Newegg.com

Designed for premium user who is looking for uncompromised performance, ASRock Z690 Taichi is definitely…

Click here to see all ASROck boards at Newegg.com

Cleck here to see all of the boards at Newegg.com

EVGA DARK motherboards blaze the trail for other boards to follow, and the Z690 DARK K|NGP|N is no exception. The ability to destroy world records is…

Stylish new designs with cutting-edge technology-infused Intel Z690 series motherboards from BIOSTAR are finally here. Engineered to run the latest Intel 12th gen processors, BIOSTAR is new motherboards are ideal for gamers looking to play the best AAA games and for PC enthusiasts that settle for nothing but the best.

With three new exciting ATX motherboard models, BIOSTAR plans to deliver the best technology to the masses. BIOSTAR is latest flagship motherboards, the Z690 VALKYRIE, Z690A VALKYRIE are the stars of the show, built with exciting new features and…

Giveaway: Speed up your storage with FuzeDrive

Enmotus, the company behind FuzeDrive, has given us five licenses for the newest update to their software which includes compatibility with Intel and instead of writing another review we’ve decided to spread the wealth. Five members of Overclockers.com will be chosen randomly and given the opportunity to test the FuzeDrive software on their own systems. We just ask that you report back in the comments with your experiences and performance gains you have seen. Before and after screenshots would be appreciated.

ASUS is usually one of the first manufacturers to market when a new platform is released, and that continues to be the case with the Haswell-E/X99 release. At first look, the ASUS X99 Deluxe looks about as packed with features as I’ve ever seen on a motherboard. In fact, ASUS claims this motherboard is their most feature-rich enthusiast offering to date. It’s time to have a look at the X99 Deluxe and see what ASUS has done with their initial Haswell-E/X99 offering, so let’s get after it!

A lot of pointless motherboards will flood the market. If I'm right then only MSI will release 17 Z690 models. ASUS, Gigabyte and ASRock, each 12-15+. I still had a hard time finding anything that would meet my needs and wouldn't have a ridiculous price.
Funny for me is that EVGA Z690 will hit the stores in the US soon. In the EU, you still can't order even a cheaper Z590, not to mention Dark.

There is also one thing I mentioned in another thread. Some brands bump prices and make cashback promotions like ASUS or MSI (not in all countries), while you can find a competitive brand without a promotion for less. Some stores are already selling Gigabyte motherboards for 20% less than a similarly equipped ASUS or MSI.

If you have any thoughts about some motherboard series, then please share it as the list is very long, and maybe something will help other forum members to decide on their next purchase.

I haven't dug in too deep with these motherboards just yet. I will be building a new system in the next year so it's something I plan to do. I'm just not sure if I want to go back to Intel or wait for the new Ryzen.

The thought of P+E cores is intriguing but I'd like to see it in action before shelling out the kind of money today's systems are demanding. Even though I already have the money earmarked for my next build I've always been budget conscious and AMD has always been the better buy except for a few exceptions.

If you have any thoughts about some motherboard series, then please share it as the list is very long, and maybe something will help other forum members to decide on their next purchase.

The point of the article isn't to make a decision on a motherboard. This is high-level on what's coming out. There are other articles that go a bit deeper (Anand and Tom's - we don't have full-time news writers...), but they aren't making recommendations either (typically a review covers that). It's just too early to say much about them outside of the '...more robust VRMs, PCIe 5.0 and DDR5, 6E Wifi, updated aesthetics, maybe some have a price and are available,... etc'.

I know what's the point of the article and as you said, we don't have full-time news writers or reviewers to cover everything while readers can share their thoughts and point out some advantages/disadvantages of specific motherboard models. Some people dig in the specs and compare some models... and maybe wish to share something. I don't expect many Z690 threads either and that's why I just said that to maybe keep some info in somehow general Z690 thread.

I haven't dug in too deep with these motherboards just yet. I will be building a new system in the next year so it's something I plan to do. I'm just not sure if I want to go back to Intel or wait for the new Ryzen.

The thought of P+E cores is intriguing but I'd like to see it in action before shelling out the kind of money today's systems are demanding. Even though I already have the money earmarked for my next build I've always been budget conscious and AMD has always been the better buy except for a few exceptions.

If not tests/reviews then probably I wouldn't upgrade my PC more often than every 5 years ;) Each year, new hardware costs more and gives less compared to the previous generation. The biggest boost gave us SSD in the last years, but CPUs? ... not really.

The point of the article is to provide a list of available Z690 motherboards in one place. Nothing more, nothing less. :thup:

Of course we want readers to share their thoughts!!! But nobody outside of reviewers has them in hand currently. When members do, surely we'll get some input. I thought "you" meant the author/Blaylock not that you were requesting everyone participate. ;)

EDIT: I agree we haven't seen anything terribly significant in the CPU world for generations now. Alder Lake will prove to be solid, but there are some sacrifices that need to be made compared to previous generations. First, W11 is just about mandatory. So if you're one of those who hang on to old OS's, these chips aren't for you (especially if you do content creation type work - but it depends... certain things take a significant hit in W10 vs W11, most things don't). PCIe 5.0 is big, especially for Intel. More M.2 sockets, little or no lane sharing FTW. Sure, AMD generally had that, but... it's something, lol.

I didn't say that John was supposed to tell me what motherboard I want (I know that already) ... I left it as a suggestion to forum members/readers who probably buy Z690 soon or dig into specs and can/wish to share something. I know that my English is sometimes confusing but I wasn't addressing John directly ;)

Just get an Asus with the slotted mounting holes if you want to use an existing air cooler or AIO. 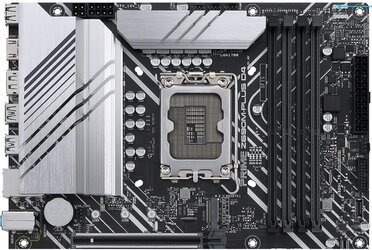 Be careful. The 'z' height is different so in many cases you need the kit as the screws are different (height).

It's crazy how many motherboards are shown on release day. Either they've had a year to design them all, or they have huge teams to do it. Maybe certain configurations are more modular between boards, and some similarities outside of the aesthetics.

Nothing really perks my interest yet. Might keep my eye out for one with dual LAN w/ one 10Gbit, surround audio off of a Sabre DAC, or maybe one of the ITX options.

Everyone seems to be whining elsewhere about SATA ports, when some of these boards have a crazy amount of M.2 ports now. Just get or build a NAS already if you have a bunch of SATA stuff.....

I donÂ’t get the ridiculous m.2 slot numbers tbh. Each one uses x4 so theoretically you could have 2 running at once with a gpu at x16 right? X4 from cpu and x4 from chipset? Why have 5 m.2 slots if you and most people will only be able to run 2?