SUMMARY: No such thing as a free lunch: With air cooling, if you want low noise, expect low performance. 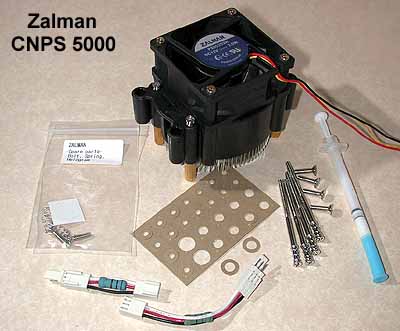 The good guys at CoolingGears sent over the Zalman CNPS 5000 to test out. This is an aluminum radial fan heatsink powered by an 4100 rpm 60mm fan. It ships with a whole kit bag of goodies including bolts for either Socket A or PIV cooling, thermal grease, gaskets and resistors to enable what Zalman calls “Low-Noise” and “Silent” Mode.

Interestingly, if you use either one of these, it may drop the voltage so low that BIOS will not pick up the fan’s rpms (at least that happens with the Iwill KK266+; Zalman makes note of this in the instructions). I did not test these modes – the fan was barely ticking over in “Silent” Mode and I can only imagine how hot a T-Bird would get.

The construction method is very interesting. It looks like the fins are arrayed in a stack, and then two aluminum bars are pressed together under very high pressure to form the “core” of the heatsink. Once compressed, the bars are bolted together to hold the assembly in place. This top view gives you an idea of what it looks like: 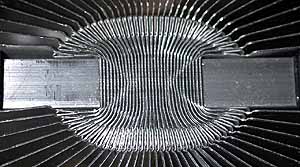 The pic below is of the base: 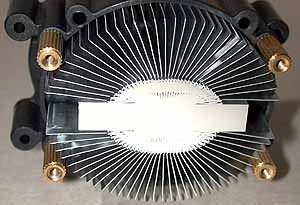 I found the base very smooth – Here’s a closeup that gives a better view of how its built and finished: 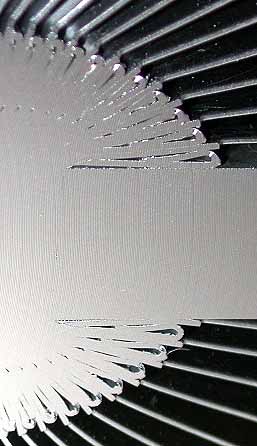 This view from the top shows the unobstructed airflow through the fins to the top of the CPU’s carrier. I calculated the fin area at about 0.92 ft². Zalman ships the heatsink with the fan blowing out, which helps to reduce noise; I measured fan noise at 57 dBA – the YS Tech 26 cfm unit comes in at about 61 dBA. The inner holes are for Socket A, the outer for PIV. 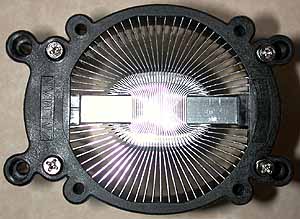 When you mount the Zalman, you will note that it sits off-center on the CPU: 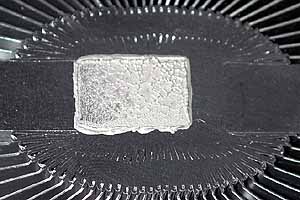 I prepared the Zalman by boring a hole through the base and side so I could epoxy a thermocouple above the CPU. The thermocouple is attached to an Omega HH23 Digital Thermometer. Ambient temps were measured with a thermocouple placed about 1 inch from the fan’s intake when blowing in, and at the base of the fins when blowing out.

I used Prime 95 to stress the CPU on an Iwill KK266+. Arctic Silver grease was used in all tests. CPU Case Temp is the temp at that point where the CPU contacts the heatsink, CPU Back Temps are measured by a thermocouple on the center back of the CPU.

Measuring ambient air temps with a fan blowing out is inherently difficult¹, so I would look to the results with the Delta 38 blowing in as more representative of its performance. Note that the anemic stock fan does not cut it in “Normal” Mode, so I did not want to test at lower airflows.

The differences between the in-socket thermistor reading and actual temps measured at both the back and top of the CPU is one of the largest variances I have seen. Using the in-socket readings for anything more than an early warning device can lead to very misleading conclusions.

The Delta 38 did not push the Zalman into “acceptable” territory (< 0.30 C/W), which, I think, speaks to the use of aluminum. The copper version of this heatsink may be a better performer, although the use of a low-noise fan (= low cfms) will compromise its performance.

Zalman’s specs indicate a fan at 5600 rpm in “Normal” Mode (+/- 8 %). Even allowing for performance variance at 8%, the fan I received is way below spec at 4100 rpm. Even so, the Delta 38 numbers indicate a fan at spec will come in someplace between the two results.

Zalman’s design philosophy emphasizes noise reduction, a worthy goal (especially if you suffer the Delta 38 and its clones). However, heatsink noise is fan related, as is performance. Airflow is what makes it work, so performance rises and falls as do cfms, and as does noise.

The only heatsinks I have tested that will make the 0.30 cut without Delta 38 noise levels are the Glaciator, Swiftech’s 462A with the Sanyo fan and the Thermaltake SK6. The Zalman CNPS 5000 in aluminum does not make this cut.

Heatsink designers right now are between a rock and a hard place; acceptable air cooled performance dictates high air flow and heat transfer. Cost pressures dictate simple designs and common materials. All of these constraints continue to point to the “easy way out” – brute force air flow with Delta 38 (and its clones) fans on fairly conventional heatsinks. In my book, not a pretty picture and a great opening for water cooling.

Thanks again to CoolingGears for sending the Zalman our way.

¹Measurements are made along the heatsink’s base and averaged; the heatsink pulls air off the motherboard, and some areas are warmer than others due to components, such as capacitors, etc.

Senfu CPU Water Cooling Kit 3/3/00: SUMMARY: The Senfu is diminutive in size but not performance – definitely worth serious consideration but only with a stronger pump. Just to recap, I received the Senfu Kit a couple of weeks ago

Surlyjoe’s waterblock gave me an idea to try some of my own engineering. The finished product. Since the last thing I wanted to do was sink some cash into buying a fancy radiator, I bought myself 2 bucks worth of