SUMMARY: A very interesting design that has “hacking” potential; as is, using the 80mm fan at low speed does not pass AMD’s test for high speed CPUs.

The good folks at Zalman were nice enough to send me their heatsink and I’ve spent some time trying alternative mounting schemes for the fan. I found that Zalman did their homework and mounting a fan above the heatsink is the best method. What I also found is that the distance from the fan to the top of the heatsink is critical – moving it one inch will rapidly decrease performance to unacceptable levels for 70 watt+ CPUs. 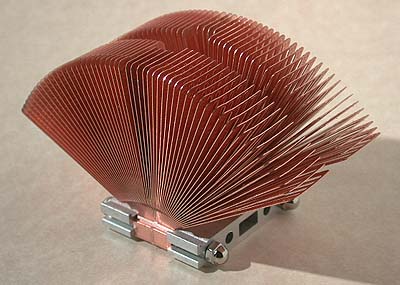 The reason I dwell on this is that mounting the fan is unique: As shown below, an 80mm fan is screwed to the bracket. The bracket is then attached by using the screws used to hold peripheral cards in their slots. By this means, the fan is held over the heatsink. 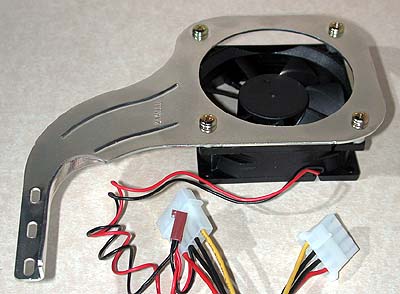 If you look down at the heatsink, you’ll see why this is critical; the fins are designed to allow airflow through them from the top down.

The construction is interesting; each fin is stamped out of either copper or aluminum (two different models) and bolted together to form the heatsink – a very clever design! 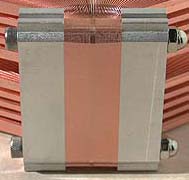 is very well finished – smooth enough to see reflections in the copper. The clip is pretty minimalist – you really have to use a screwdriver to put it on. However, it does the job. All in all, a clever design well executed.

I prepared the fan by boring a hole in the base’s side so I could epoxy a thermocouple above the CPU. The thermocouple is attached to an Omega HH23 Digital Thermometer. Ambient temps were measured with a thermocouple placed about 1 inch from the fan’s intake. I used Prime 95 to stress the CPU on an ABIT KT7, running a Duron 800 @ 1000 (63.1 watts). The Duron is actually a more severe test as its area is less than the T-Bird, so there is a higher watt loading by area. Arctic Silver grease was used in all testing.

As you can see from the table, the Flower performs quite well at 12 volts. The ADDA fan at this setting is about a quiet as a 60mm YS Tech; I measured it at 59 dBA 8 inches from the fan’s intake. Although at about the same level, the noise is not as high pitched as the YS Tech.

I then tested it with the fan 1 inch from the fins and the Delta temp climbed to 18.1 C – I terminated the test at that point. Finally, I tested the fan at 5 volts; within one minute, Delta temp reached 19 C and climbing, and I terminated this test also. At these Deltas, C/W hits 0.3, which is AMD’s requirement for CPUs of 70 watts+; I use this as the minimum requirement for acceptable performance.

The Zalman Flower is one of the more interesting heatsinks to come to our attention. It is marketed as a quiet cooling solution, and using the 80mm fan at 5 volts, it is certainly quiet but not sufficient cooling for high-power CPUs. It has potential for good cooling in socket based systems that are well ventilated; I could see some interesting configurations with ducted, 120mm fans that might give super cooling results for both the CPU and motherboard.

Right now, there is no US availability; Zalman is looking for distribution, so some of my vendor friends should drop them a line.

Thanks again to Zalman for sending this our way – an interesting, clever design!

When overclocking a PII CPU one of the major problems is cooling the cache and the backside of the CPU. Because the PII is entirely enclosed in a plastic casing, conventional cooling methods such as sandwich type coolers will not

Through what some may consider nefarious means, I have acquired an Evercool Buffalo Heatpipe CPU cooler.