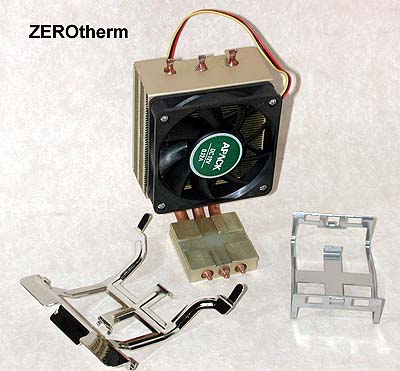 The kind folks at CoolingFlow were nice enough to send a sample of the heatpipe heatsink called the ZEROtherm, manufactured by Apack. This design is used for bot Socket A/370 and P4 cooling – a simple clip change and you can use it on either platform. Note that the maximum allowable CPU load is not more than 75 watts.

The heatpipes are routed up into the radiator: 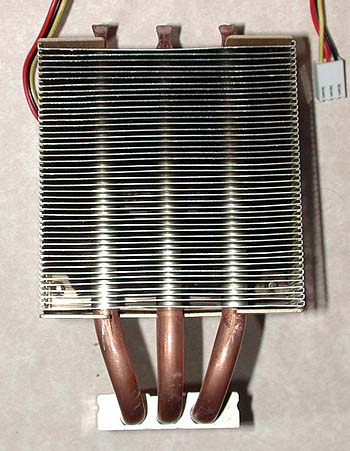 The fan pushes air through it for cooling.

The base has channels machined into it for the clips: 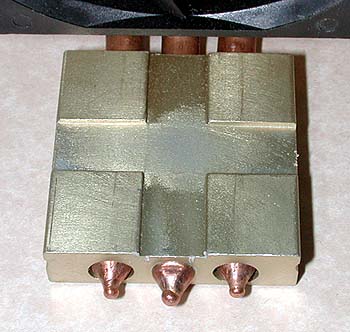 The heatpipes appear pressed into the aluminum base:

One problem I noticed using it on a P4 is that the mounting clip does not ride in the base’s grooves: 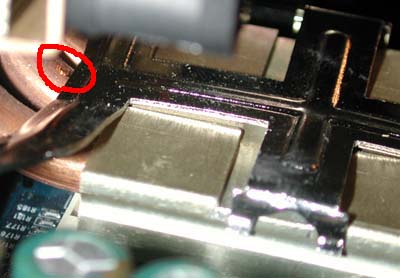 One of the heatpipes impinged on the clip (circled in red) such that it does not sit in the base’s grooves. This is not a problem that prevents its use with P4s, but be aware that this may happen.

The base is aluminum and reasonably flat and smooth: 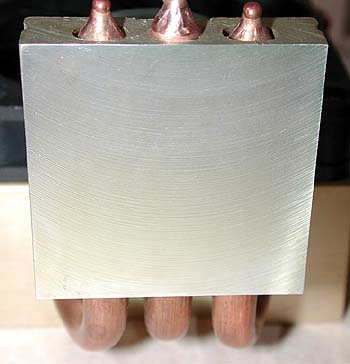 In summary, a heatpipe heatsink with a very easy to use clip powered with a low noise fan.

The ZEROtherm was first tested on the CPU Die Simulator which gives results that are unaffected by motherboard influences. I then tested it on a Shuttle AK31 (modified to read AMD’s on-die diode) for Socket A and an Acorp 4S845A for P4, as an example of what users might see on their systems.

Die Simulator results place the ZEROtherm in the lower rank of heatsinks tested to date for Socket A and P4 cooling (Heatsink Ranking).

Once again, no such thing as a free lunch: Low noise air cooled solutions invariably yield low performance. Heatpipes are not magical nor particularly efficient compared to other technologies used for air cooling solutions (at least, not so far).

I think for heatpipes, the essential issue is the ability to overcome two thermal interfaces which “traditional” heatsinks do not face:

The quality of both these joints directly impacts performance; the less efficient the joint, the less efficient overall thermal peformance, as demonstrated HERE. Considering these challenges and cost pressures, I wonder if any heatpipe solution can fill the bill.

The ZEROtherm is an OK solution for a low noise, spec P4 system; the maximum allowable CPU load is not more than 75 watts.

Thanks again to Y. Choi at CoolingFlow for sending this our way.

UPDATE 1/21/02: Cusil Thermal Conductivity Mr. Toshi Oyama, Ph.D. R&D Manager, WESGO Metals recently informed me “that the thermal conductivity of Cusil was calculated from Electrical conductivity, which is reasonable since both are controlled by free electrons in metals. However,

From Air to Water – Lessons Learned