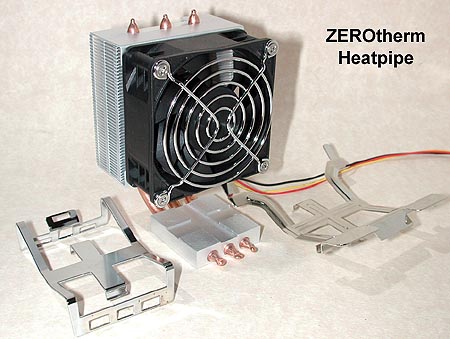 The good guys at Cibna were nice enough to send the newest version of the ZEROtherm for a test spin. This is a heatpipe heatsink featuring three pipes running up to a finned radiator: 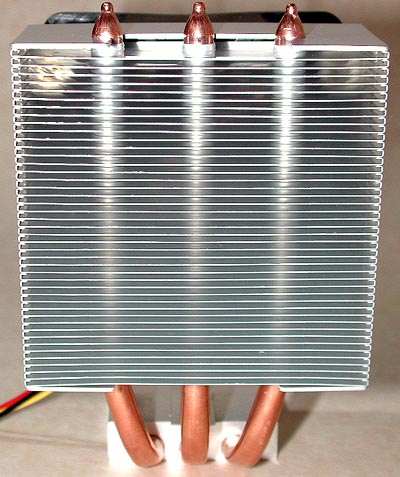 The base shows polishing marks: 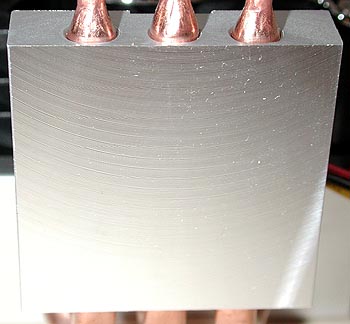 When I ran my nail over it, I could feel the ridges – not the smoothest finish I’ve seen. The mounting clip is quite secure but does require a screwdriver to mount the Socket A version.

The ZEROtherm was tested on the CPU Die Simulator which gives results that are unaffected by motherboard influences.

Die Simulator results place the ZEROtherm in the lower rank of Socket A heatsinks tested to date (Heatsink Ranking). It has not substantially changed from the first version tested.

The ZEROtherm is not a particularly aggressive choice for Socket A or P4 cooling. It’s noisy, with its 6000 rpm fan, and performance is subdued.

Thanks again to Cibna for sending this our way.

There’s some dispute about whether Clawhammers will or will not show up Q1 2003. The AMD CC says one thing, which we reported yesterday. Extreme Tech had an article which reports both the AMD CC and later AMD PR comments

SUMMARY: A very well made mid-tower case – well built and solid. With some mods, could be a very nice, compact overclocker’s case. Depending on your fancy, you can change the case’s front. Fong Kai was kind enough to send

When A Good File Goes Bad: The Plot Thickens . . .

First, thanks to all who sent in suggestions, but there’s a new development in the story. Since a new hard drive was going to have to be bought in a few months for a new system anyway, I bought a