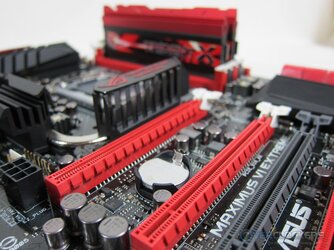 We teased you a bit with a few results and several pictures of the ASUS Maximus VI Extreme (aka M6E occasionally because that's immensely easier) in our initial Haswell review. Sorry this took so long, but this motherboard has more features than you can even imagine, so let's jump right in and we'll show you what ASUS' flagship is made of.
Click to expand...

Side note about the software in the review: Just tonight Lvcoyote confirmed that TurboV Core does indeed function on other boards. If it can use AI Suite III, it can use TurboV Core.

Excellent article as always! That feature set is definitely one thing that sets the extreme line apart from other boards.

Great job (as usual)..was wondering which board you using in the haswell review. Is this the board in you avatar?
W

"Rather than trying to find software to do it (which, other than OCZ, can be difficult) or having to use a Linux live CD to secure erase, you can now secure erase your drives right from your UEFI."

That's not entirely true. I have Samsung 840 Pro, and secure erase comes with its Magician software.

Whoops, forgot to move this to Intel MBs last night. It's where it should be now.


dudleycpa said:
Great job (as usual)..was wondering which board you using in the haswell review. Is this the board in you avatar?
Click to expand...

This is not the board in my avatar, that is the Rampage IV Extreme.


wujj123456 said:
"Rather than trying to find software to do it (which, other than OCZ, can be difficult) or having to use a Linux live CD to secure erase, you can now secure erase your drives right from your UEFI."

That's not entirely true. I have Samsung 840 Pro, and secure erase comes with its Magician software.
Click to expand...

I didn't know Samsung had that, thank you for pointing it out!

Good to know, I could use that for my Deluxe. I wonder why ASUS didnt put it on the disk or in the DL section?

hokiealumnus said:
Side note about the software in the review: Just tonight Lvcoyote confirmed that TurboV Core does indeed function on other boards. If it can use AI Suite III, it can use TurboV Core.

Because it's not 'supported' on anything but the M6E. When asked whether it worked at our meeting in May, they said basically 'maybe it will, but we aren't testing it and it won't be supported'. Considering AI Suite III is consistent throughout the line, it stands to reason TurboV Core will work on all of them too. You'll just have to download it from the M6E page (or in your case, the reviewer FTP ).

Very good, thanks for the heads up. Great review btw.

The SSD performance chart with secure erase is laughable, as a note. Go asus.

Don't you ever make us wait 5 days for anything less than this greattttt review and freaking mother board,, too bad i have a 4,6ghz i7 SB and i'm sorry haswell

Still makes me excited for my OC Formula to get here tomorrow! But that OC Panel is freaking awesome.

Here are a couple items ASUS Z87 board owners will find quite helpful:

wow, that board is a beast! Great review as always!

ASUS emailed with some feedback on the review and has requested a few clarifications & inclusions. These have been incorporated into the article.

When mentioning the OC Panel in normal mode, this sentence was added:

Note the bottom buttons on the left and right - they implement an OC Profiles you set in the UEFI and adjust the CPU Fan Speed, respectively.
Click to expand...

Added more detail re: VGA HotWire for those that may not know what that is:

For those of you that don't know what VGA Hotwire is, here is ASUS' description:

"Propreitary VGA hotwire allows you to plug and solder wires on the card’s voltage regulators and accurately read and control Vcore, Vmem, and PLL voltages from ASUS ROG MBs on a hardware level."

On ASUS cards that feature VGA HotWire plugs, it's as simple as plugging in (or soldering, on some cards) six wires and then plugging them into the OC Panel for full voltage control via UEFI, in the OS and with the OC Panel.
Click to expand...

When describing the LED indicators that flash as you go through post, I forgot to mention their name, which is QLED.

* Clarification, courtesy ASUS - Thunderbolt is supported by the Z87 chipset, but it is not native, thus it does require an additional controller built into the board, which would come as an extra expense.
Click to expand...

At the end of the UEFI section:

Author's note: I forgot to mention two features of the UEFI. One has to do with the SATA configuration - You can rename the ports in the UEFI. Additionally, and an important thing that I just forgot is "My Favorites". You can add commands to this menu (hit F4 while they're selected) to have all the settings you want right there for easier access.
Click to expand...

With regard to TPU in AISuite III:

Author's Note: ASUS pointed out two items I forgot to mention. These voltages can now be keyed in manually if you'd prefer to do that rather than use the sliders. Additionally, the voltages are color coded. As you move up, they will change colors to indicate whether your voltages are safe or getting to the not-so-safe range.
Click to expand...

With regard to the WiFi module:

Those are ideal, perfect-condition numbers though. In ASUS' real-world testing, they're seeing more like 300-450 Mb/s transfer rates. The module also has Bluetooth 4.0 built-in. ASUS also points out that the positioning of the WiFi module's location is optimal from a lack of interference perspective; if it were closer to, say, the GPU(s), there would be increased heat and interference.
Click to expand...

At the end of the Up Close and Personal section:

As you've seen, there are quite a few fan headers on this board. All told, there are eight fan headers - 1x CPU fan header, 1x CPU OPT fan header, 3x Chassis fan headers and 3x Optional fan headers, all of which accept both 3-pin voltage controlled and 4-pin PWM fans. There are also three OPT TEMP headers for plugging in three thermistors (not included).
Click to expand...