Dr. Debug and beep codes from dying X79 board

Yesterday I shut down my Asrock X79 Extreme4 system, everything was just fine....later on I powered it up and...no display. OK, started process of elimination and testing. With nothing but the PSU a simple GPU and just one stick of RAM again powered up, no display. Hooked up an old PC speaker and witnessed the codes after power on:


If I'm understanding the Dr. Debug codes, F2, F9 refer to "Recovery process started" and "Recovery capsule is not found".

D6: "The VGA could not be recognized. Please clear CMOS and try re-installing the VGA card". Check, did that with different vga cards, clearing CMOS. No change

5A: "Please re-install the CPU and memory then clear CMOS. If the problem still exists, please install only one memory module or try using other memory modules." Check-check pulled CPU out of socket & re-seated. Used comparable DIMMs on hand. No change

36: Not sure, if it stands for "0x36" then that is "CPU post-memory initialization. System Management Mode (SMM)
initialization " and is particularly an error message .

I think it's safe to say that this board is toast, I've left no stones un-turned. I was hoping the "why" might be revealed in the beep codes and LED status displays.

I was already shopping for a desktop build to replace an aging test rig, now I need a replacement for what was my 2nd host for [email protected] GPUs.

Awman Tim, that sux. Hope you can find a replacement board at a reasonable price. I noticed even old boards have a hefty pricetag nowadays. 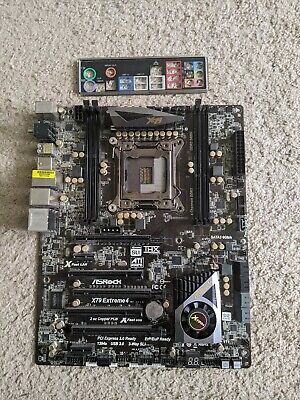 This was my workhorse for a number of years until i recently upgraded my entire PC. It is used and in working condition. It is a little dusty in certain areas. One of the pieces that snap the ram into place broke off but it still works.
www.ebay.com
OP

Nebulous said:
Awman Tim, that sux. Hope you can find a replacement board at a reasonable price. I noticed even old boards have a hefty pricetag nowadays.

Thought about that, actually still thinking....

Before the x79 died I was going to build another rig, so now why not two? If I could get a skt 2011 board reasonably priced, I could use the $1000 Xeon E2650 that I got from @Hardass for $500, and use the 16GB set of Gskill Ripjaws Z that's still perfectly good. Plus the Dark Knight HSF, which I'm not sure if I can find mounting hardware for a different socket...

Meanwhile, I've put together a Newegg wish list which I'm just about ready to put in the shopping cart and buy: Gonna buy list.
OP

Well I'm not giving up just yet. Searching "Recovery capsule is not found" is all over the place, mostly forum chatter and unrelated matters. I wonder, maybe a new BIOS chip....I contacted Asrock
Technical support, filled out a 'trouble ticket' describing the situation. I see BIOS chips programmed for Asrock X79 Extreme4 boards for about $14 average. Maybe.....
J

Hope you can find a replacement board.
OP

Jess_Bullet said:
Hope you can find a replacement board.
Click to expand...

They're out there, still fetching a pretty penny. I'm hoping that Asrock tech support can help me determine the cause of death.
A replacement BIOS chip would be worth doing. Otherwise, a new build would be money well spent.
OP

So I'm exchanging emails with Asrock tech support, they tell me to:


Please follow the next steps in order to troubleshoot your main board.

First: disconnect the two power supplies sources from the main board. (24 Pins and 8


Pull the Battery out from its battery Socket.

Second short the 2 pins CLRMOS and set for from position 1~2 to 2~3 clear for about 5 seconds.

Finally reverse all steps above.

Turn your PC on and when screen Display appear Press the key F2 to Access to CMOS setup and then press the key F9 to load Optimal Defaults.

Finally press the key F10 to save and exit.

After your clear CMOS and still does not respond do the next steps:

In order to troubleshoot your mainboard disconnected all cables and work only with the cables recommended below.

Make sure the mainboard is lay down in a clean flat surface and use the protection the comes with your mainboard to avoid any electrical short underside the circuit board.

Please connect only the cables requested below (do not connect IDEs, Floppy e)

Connect the Speaker from your computer case (Diagnostic beep code by speaker). No sound speakers

Connect the Power Switch from your Computer case into Panel 1 Pushbutton.

Take your RAM out of your Mainboard as well as video card.

(if you heard them turn it off)

If all steps above passed please put your mainboard inside the case.

Every single time you added a cable from IDE or CD room please turn your PC off and try, if for some reason fail disconnect the last device you install and go one step back to trouble shoot by steps.


Please reply this email for fast service
Click to expand...

No RAM and no VGA: 3 beeps, pause 3 beeps etc. I sent a link to the video I shot of the LED and beep codes.

I get a reply yesterday evening:

Format your drive and start a new clean installation of your windows
Click to expand...

I remind them that this is a motherboard hardware issue, getting no display at all. Refer to my troubleshooting comments. Can you sell me a replacement BIOS chip?

Asrock tech support emails this morning, they can sell me a BIOS chip for 15 bucks. I may take them up on that, but first because the "5A" code popped up, I'm wondering if the processor has some issue, not likely but it's the least expensive route, bought an Intel Xeon E5-2650 SR0KQ off ebay for $6.38 shipped. If that's not the cause then I'll go with the new BIOS chip.

AFAIK, the most important code is the one it hangs on/last one... in this case F9 (generally RAM??). If the others were a problem it should hang/stop there.

No RAM and no VGA: 3 beeps, pause 3 beeps etc. I sent a link to the video I shot of the LED and beep codes.
Click to expand...

What did I miss here? Both situations are "No RAM/VGA", but different results? Is that a typo or......?


EDIT: @ihrsetrdr - That said, testing with a cheapo CPU isn't a bad idea, just be sure the BIOS you have on there supports it. The 2650 is listed, but there are two versions (SB and Ivy bridge) and two different BIOS supporting them (you'll need P3.20+ for the Ivybridge version).
Last edited: Jun 7, 2022
OP

EarthDog said:
AFAIK, the most important code is the one it hangs on/last one... in this case F9 (generally RAM). If the others were a problem it should hang/stop there...
Click to expand...

RAM checks out OK, tested in another machine. According to DR. Debug F9 means: "Recovery capsule is not found". I haven't found anything definitive in searching, and Asrock support didn't comment on that.


EarthDog said:
What did I miss here? Both situations are "No RAM/VGA", but different results? Is that a typo or......?
Click to expand...

Whoopsie, I mis-copy & pasted, should be:

I received a Intel Xeon E2650 bought on ebay($6.38) installed and hooked up PSU, turned it on....nothing, no LEDs, fans etc. Turned off PSU, noticed the board was unusually warm in the lower right area. Inspected, no signs of anything unusual. Pulled the processor out, as going to put the old one back in, but then I wondered if I had put the new proc in the right way. Checked MB manual or orientation, put the new processor back in. Powered up, this time the usual activity(fans -LEDs-etc) present, and the same codes as in the beginning.

Only thing left to do would be to replace the BIOS chip. It's only like $15, but at this point I would like to ask: What is the liklihood of a bad BIOS, given the symptoms reported in this thread?

Did you confirm which 2650 you have (there's two, SB and IB-based) and if the BIOS on the board supports it (if IB you need P3.20 or something, the other should be native), first?
OP

EarthDog said:
Did you confirm which 2650 you have (there's two, SB and IB-based) and if the BIOS on the board supports it (if IB you need P3.20 or something, the other should be native), first?
Click to expand...

So long as it's a SB, then you should be ok with the earlier BIOS.

OK, one week out from the initial "no display day". Began troubleshooting 101:
1. pulled x79 board out of case, nothing attached except power, a simple graphics card and 1 stick memory. Cleared CMOS.
2. Swapped video card, PSU and RAM with another machine. Tested components from x79 rig with other machine-tested OK.
3. x79 still no display using other rigs parts.
4.Checked LED and audible beep codes
5.Contacted Azrock tech support, double-checked previous steps
6.Bought identical CPU, installed....no change.
7. Googled "no display, BIOS?" and checked all 42,500,000 results(well, most of them).

I need to decide whether to take this board off life support and let it go to e-waste, or gamble another $15 on a new BIOS chip.

I ordered a replacement BIOS chip, should be next week. However, if that is not the 'fix' and this board is junk, I still am going to need a board I can put two graphics cards in. I wasn't planning on putting a 2nd card in my B560M, but my newer rig- the Z590 Extreme...upon closer inspection looks like there won't be enough room for another X2 slot card. Wish I had noticed that earlier.
Just installed the 1080ti in the Z590 machine....all's good. Will be monitoring the heat load. 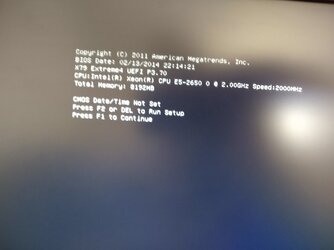 So, this is me being me...gotta ask: "why?" What caused that BIOS chip to fail? Granted, I've killed a few motherboards(and processors) in my time, but this machine has really had pretty light duty, except for the first few years as a 24/7 folding machine.
You must log in or register to reply here.

Sexy and cool for the summer