Girlfriend Got me an Xbox One S for Xmas... Kinda wish I'd ask for an iPad 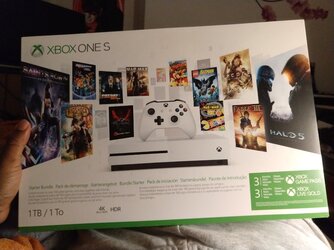 (Kind of a long story... but if you've been around a while you guys know I'm a writer and long stories are kinda what I do...)

Ok... little bit of background here: I'd just moved to Berlin, Germany from Barcelona. I sold off my Xbox 360 and Kinect before coming because I didn't want to travel with two systems. (HUGE mistake.) So it was just me and my PS3 for the first year or so I was here.

And I was EXTREMELY poor once again. (Okay... "Poor" as in "I could live wherever the hell I wanted in the entire world... with my cat... and get by on next to nothing.")

So the Xbox One and Playstation 4 came out roughly around the same time just before Christmas.

I knew I couldn't come close to buying one of them. Didn't even particularly WANT either of them. (That last bit is important.)

All I wanted on earth was to be able to play the new Killer Instinct game. Neither the PS4 or Xbox One really HAD anything that anybody really wanted to play, in the beginning, besides that.

So... the following Christmas... after I'd moved in with GF#1... I decided to look around to see if maybe I could just rent an Xbox One for a weekend.

Just to purchase and play Killer Instinct. (Which you could play FOR FREE.) I figured a 20 or 30 buck rental wouldn't be enough to kill me.

Then I thought "Even better! What if I just buy a used one and RETURN IT?"

Just so happens I knew the manager of a Famous Videogame Retailer.

I was just hinting around about if he would let me do this or not. Much to my surprise... he tells me he got an Xbox One for FREE that he never ever plays because he also has a PS4. (This point is ALSO important.) So he says I can borrow it for a weekend if I want.

So I get the Xbox One... I play the free version of Killer Instinct. Wind up buying the whole thing. Spend the whole weekend playing it... and I'm happy as a clam!

Weekend's over. Time to return my buddy's Xbox. "Where do you wanna meet?" Nothing. "WHEN do you want to meet?" NOTHING.

This goes on for a YEAR. Long story short I breakup with GF#1, move all the way across town, and bring the Xbox with me.

A year later this friend FINALLY gets in contact with me to get his Xbox back. Says his GF wants to play the new Final Fantasy.

Nothing. This goes back and fourth for FOUR YEARS total. I never really buy that many games for the system because I know at SOME POINT I've got to give it back to this guy.

That finally happens this past October. He's got a friend dying to play Red Dead Redemption 2 but he doesn't own any video game system.

By now I've already had, and been happy with, a Playstation 4 for like two and a half years. But I was right in the middle of finishing up Sherlock Holmes: Crimes and Punishments on Xbox One (which I got for free at some point I can't remember) when this guy asked for his system back.

I surrender the system without incident. (Even though, technically, I owned it waaay longer than he did at this point). And didn't really think twice about it... until around Christmas time.

GF#3 asks me what I want for Christmas. IMMEDIATELY I thought to myself "IPAD!" I never really wanted one before... but right now I could USE one for SOOOO many things...

But I know that... particularly towards the end of the year... money's pretty tight for both of us.

So I give her a range of things from about an $8 Funko pop to a used $130 Xbox One S. I tell her I would be ABSOLUTELY happy with anything on the list.

She gets me a BRAND NEW 1TB X... well whatever... You already saw the picture.

...until I remember I never really WANTED an Xbox to begin with. I just wanted to play Killer Instinct. Which I'd DONE at this point.

The Sherlock Holmes game I was in the middle of? I was at the END of it. Downloaded it and finished it in like 2 hours.

For those of you who don't know... Xbox has had kind of an exclusivity problem for basically this ENTIRE CONSOLE GENERATION. There's practically no game available for the system that isn't already available for every other system. (Notable exceptions: Sunset Overdrive, the Halo Franchise, Sea of Thieves which sucks BAWLZ, and the aforementioned beloved KI). I've already played EVERYTHING on the PS4.

So I've been thinking about that iPad... but it's not like that Xbox can ever NOT be there now.

It's probably the single greatest gift I've ever received from a girlfriend (or at least TIED for first with GTA San Andreas... which I would put up against almost ANY Christmas gift short of an actual car... and even then it depends on the CAR.)

And I don't want to seem ungrateful because I ADORE HER for even thinking enough of me to buy me something like that.

I just don't know what it says about the state of console gaming... or maybe my age and maturity level... or maybe how far technology has come and how we interact with it in our everyday lives that an iPad (and I'm a LIFELONG Apple hater...) would even enter my mind.

EDIT: BTW... I'm probably going to MARRY her. You want to show a guy you're ABSOLUTELY serious... a gift like that or an all day spa, hot tub, steam room deal will do it. It's 2019. Everybody's gotta up their game. But even without the gift... she cares about my cat almost as much as I do... and there's no quicker way to my heart than him.

yep thats a thing.
xbox seems to be lacking in the games dept ever since the last part of the 360's mainstream life.
I'm also one of the people where a game will sell me a system. i just recently (as in Nov '18) bought a PS4 because of ONE game. but now that i have it i am in the mode of "well since i have this now i can try..." and i have been getting cheap games like crazy.

up untill the PS4 the newest system i had was the Wii U that i bought for The Legend of Zelda: Breath of the Wild, i actually bought it in advance knowing it would come out for it but still. i havent played it yet, its still sealed, i might just want to find a used copy at this point because it has potential in the collector market.

any way worst comes to worst you fall on hard times and you can "sacrifice" your console to pay bills or pay for something you both need or could benefit from and that scores major brownie points. it probably wont go noticed that it doesn't get used much.
DONTsell it just to get some other frivolous thing for your self though, a friend of mine did that with his SLR. He's had several wives now...
OP

Niku-Sama said:
DONTsell it just to get some other frivolous thing for your self though, a friend of mine did that with his SLR. He's had several wives now...
Click to expand...

Yeah. I mean even with almost never buying anything for it I still have a TON of Xbox One games... A lot of them I got for free with Live Gold... Some of them I paid $5 or less for.

I have Mortal Kombat XL for both systems (I got it REALLY cheap on PS4 since I knew I'd have to give the Xbox One back one day...) but I'll probably install it on Xbox One again since it takes up like 60GB on the PS4 and I only have a 500GB drive on that one and a 1TB drive on the Xbox One... Plus I've already unlocked almost everything on the Xbox One version. It's a shame I didn't know in advance I was going to have my own Xbox One. I missed out on a TON of really great... GREAT deals. Like South Park 1 and 2 in some kind of collector's box for like 10 bucks.

Should've bought that as a matter of PRINCIPAL... but oh well. Live and learn!

EDIT: BTW... I'm probably going to MARRY her. You want to show a guy you're ABSOLUTELY serious... a gift like that or an all day spa, hot tub, steam room deal will do it. It's 2019. Everybody's gotta up their game. But even without the gift... she cares about my cat almost as much as I do... and there's no quicker way to my heart than him.
Click to expand...

Wise man once told me "if you don't know, then you know". Think about that before you ask!

You're in a relationship - TALK TO HER.

Explain the situation exactly like you told us, return the Xbox if possible and get the iPad (why an iPad?). Sweeten the pot by going shopping with her. Avoids misunderstandings and/or worse down the line and who knows, might even make your relationship stronger because you're showing you trust her enough to admit when you make mistakes [emoji4]
OP

Kenrou said:
You're in a relationship - TALK TO HER.

Explain the situation exactly like you told us, return the Xbox if possible and get the iPad (why an iPad?). Sweeten the pot by going shopping with her. Avoids misunderstandings and/or worse down the line and who knows, might even make your relationship stronger because you're showing you trust her enough to admit when you make mistakes [emoji4]
Click to expand...

I'm WAY more upset that she got me an Uhura (from the much-hated Star Trek Beyond) rather than the Scotty Funko Pop (from The Original Series... which somebody was selling for FIFTEEN BUCKS! I gave her the link and everything!) that I asked for. We WILL be having a chat about that. Because how the hell am I going to run around my apparent screaming "BEAM ME UP, SCOTTY!" if Scotty ain't THERE???

PS: Miracle o'Miracles the EXACT... SAME... SCOTTY... from Christmas mind you... was back on eBay last Friday. Same price. Same photos. Same everything. THIS time I didn't hesitate and bought it instantly myself. When it gets here... we're gonna have a talk.

You just don't want to go shopping with her
You must log in or register to reply here.