I have always messed around a little bit with water cooling, but always with just really simple loops (120-240 rad, small pump and bay res and CPU block), but recently decided to go in on a bit larger of a project.

When I put the system together, I was able to salvage enough parts at my local store (Micro Center) in order to make the loop functional for now, but I am not very fond of the way it looks.

I am looking trough Frozen CPU and finding quiet a bit of cool stuff there and here is what I plan on changing:
Re-route the Loop (See picture below)
Move LED fans behind Rad and SP120's to front (probably will be using White shrouds)
Replace all connectors and elbows with White ones
Purchase pre-sleeved cables (White)

Below are pictures of the system as it sits, and a quick sketch of what I plan on doing with the loop.

Any and all suggestions are welcome.

As much as this system is for performance, I will be wall mounting it and want it to have the "Wow" effect as well. 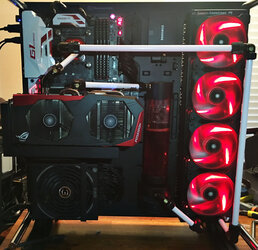 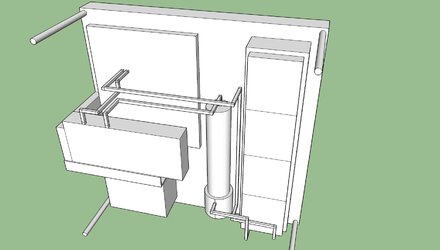 I would recommend staying away from frozen cpu as there has been a lot of problems with them lately. Try performancepcs instead, our my old standby Amazon.

Otherwise I would say you have a nice little setup there.

Oh and welcome to the forums.
OP

Lochekey said:
I would recommend staying away from frozen cpu as there has been a lot of problems with them lately. Try performancepcs instead, our my old standby Amazon.

Otherwise I would say you have a nice little setup there.

Oh and welcome to the forums.
Click to expand...

Wow, I was unaware of that, always thought they are the end all be all guys. Performance has everything I am looking for at an identical price so I will go with them instead.

Your welcome, frozen used to be the go to store but recently it has taken a turn for the worst. If you Google it you can find the news stories.
You must log in or register to reply here.