I've gone and done it, bought hardware just to get one Steam achievement in 3DMark. It's the CPU 50% overclock one as title suggests. Nothing I have was likely to do it, as the base clock was too high or otherwise the platform wasn't OC-able.

I debated doing a non-K OC on a Skylake Celeron, but instead was talked elsewhere into getting a P35 chipset mobo and a Celeron 440. I also have a spare Core 2 E6300 at home which might also be used. This would cost less overall than the Skylake Celeron would, and I could leave it as a full system for... uses unknown. I fear my limited supply of DDR2 ram would hold me back, as the bulk of which was 533. I also ordered 2x1GB of 800 for less than the cost of some premium thermal compound.

So... should be some retro fun. Parts are all due to arrive tomorrow but I might have to get a little creative to start on time if any are late. Undecided what GPU to use on it yet as I'd need to pull it out of another system. It might just come down to which one is easiest to reach! Having said that, I might lean towards the 750Ti if for no other reason than I don't think any of my spare PSUs have PCIe power connectors.

Does it work with the demo version?

Not sure, think achievements are only in the full version. You can still do it for fun if you like...

Someone is going to have fun!

Which benchmark do I have to run? Firestrike? 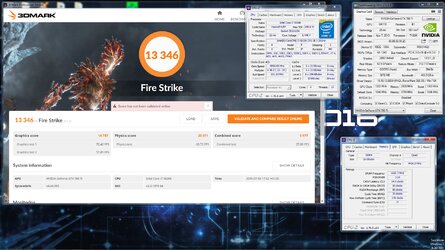 I'm not sure actually, probably Firestrike but dunno if others are accepted also.

The mobo has arrived. I also didn't notice a smaller package which is the Celeron. I'm just short the ram but might get things configured tonight using slower ram and see how I get on regardless.

If you find you like this mackerel you can always come check out the bench team. There's a link in my sig. We also do a monthly benchmark
OP

I do like this, and have even joined hwbot but never got around to making even a single submission yet. I run out of time to do more than what I personally need to at a given time. I will look at the monthly one, probably bit late for January.

Anyway, I've looked at the mobo and it arrived without cap on the socket. I noticed one seriously bent pin that was folded back on itself, and another one slightly misaligned. The bent over one, I believe is VSS so I don't think that is significant. The misaligned one is data, so I hope that's close enough. I've put the Celeron in place now to prevent anything else happening to it. Inside the mobo box was a LIVE spider. It wasn't small either...

That's too bad. I hate it when parts aren't the way they're described in adds. Really cheeses me.
OP

It was described as working so we shall see. In part why I wouldn't normally buy a mobo used, but not much choice for something of this age and cost. There were higher end boards, but the pricing got silly fast and I didn't want it that badly.
OP

Good news: it boots. In looking through the BIOS, my fear remains by default it only seems to support 667 and 800 ram, and I only have 1GB of 667 at the moment which isn't going to be fun with Windows is it? Gonna try my luck with the 533 regardless... if it'll boot far enough I can then manually select a lower ratio to bring it down to 533-ish.
OP

Nope, not gonna run the 533 ram. Putting them in at any time results in continuous beeps from the mobo, even when I tried using the 667 I have to set the ratio to 1:1 (400) and add it in after, it seems it detects a change in ram and resets it to defaults.

It is an interesting experience trying to run Win7-64 on 1GB of ram, where the min req is double that. The extra ram can't come soon enough before I do anything serious, but at least I can configure the OS ready.

Do you have XP32. That'll run on very little ram
OP

I'll never find XP again. Haven't looked at it since it became unsupported, so no idea where it might be now. It is functioning ok for me to configure Win7 so I'll keep on doing that.

One weird thing, I used a 7300 initially which got me a display ok. I found my old 8600 and wanted to put that in, but no image. The card was working previously so wonder if this is one of those weird compatibility things. I'll have to find where the 750Ti is some time before I install drivers.
OP

The 2x1GB ram has arrived so that'll go in tonight. I also found out the Celeron is below the minimum requirements for 3DMark, so I will proceed with the Core 2 E6300 instead.

Just checking the bot and that should be do able. You only need 50% right? around 3000? According to their stats 3188 is average clock for air. http://hwbot.org/hardware/processor/core_2_duo_e6300/
OP

Thanks to its low clock I only need 2.8GHz for my needs, which will also take the ram to its rated clock limit at lowest ratio. Anything extra is a bonus. Something to look up later is just how fast have people got DDR2 to go?

yEP, YOU'RE READING IT RIGHT. mY BEST STICKS i HAVE DO ABOUT 1450 mhZ CAPS LOCK AGAIN
You must log in or register to reply here.