I decided to have some clocking fun and find out myself today what the limit is on my 1700. I've only ever tried a low voltage OC on it, where incrementing in 100 MHz steps, it reached 3.7 at fixed 1.20v before crashing. I only stability tested at 3.6 GHz 1.20v.

Two questions:
What's the recommended max voltage for 24/7 running?
I recall someone on this forum posted a nice chart showing voltage vs. clock for their sample. Anyone know how to even start looking for it?

Phase one testing complete. I reached a short term stable 3900 at 1.40v set with load line level 4. This is with Prime95 29.1 all threads loaded with 64k FFT. Temps were well into the 80's, and I decided not to throw more voltage at it at that point. I noted some other readings and things I need to digest, but for now I've returned to my baseline 3.6 at 1.20v set for comparison.

Here's a summary of key results. Loading was Prime95 29.1 (probably not latest build) set to 64k FFT in place testing. This means each task takes about 512k of ram, with 16 of these this wont fit inside the L2 cache, but does fit in the L3 cache so it shouldn't be limited by ram. The in place setting also helps that.

V CPU set is the number I type into the bios.
V load is the reported voltage using monitoring software under load.
CPU is the nominal clock. The mobo actually runs a bus clock of 99.8 so actual numbers are slightly lower.
W CPU is the reported package power, including SOC. I found the reported value without SOC to go up significantly (above package values) when Ryzen Master was running so I had to disregard it.
W system is the power taken at the wall socket.
CPU temp is... CPU temperature. Note I didn't necessarily leave it a long time to stabilise, especially as I was using an AIO which could have quite some thermal mass behind it. Also I didn't note ambient temperatures but I'd guess it was 25C+.
CB R15 is Cinebench R15 score. Best of 3 runs.

Not surprising there's quite some voltage droop. It was actually reporting the set voltage when idle, but dropped under load. Using load line helps bring it up. The mobo offers up to level 5, but I didn't try that.

I'm more a performance per watt kinda guy, and this is a good example of why I don't normally push for high overclocks. Going from my 24/7 OC at 3.6 GHz to the max reached today of 3925 MHz is a clock increase of 9.0%. The reported CPU power increased a whopping 84%. Even after dilution from other system components, the system power draw was up 42%.

The Cinebench scores went up 8.5%, so close to ideal scaling. Presumably there is still a small influence from ram which would start to limit more as CPU clocks go up. 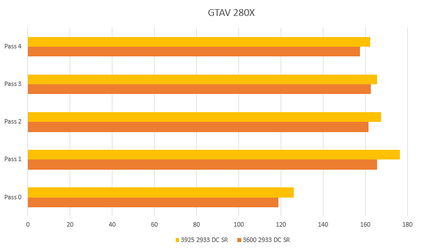 Since I had GTAV data from yesterday, I could run it again for comparison ere. Ram is unchanged, only difference is the CPU clock. There were gains across the 5 passes, start from pass 0 it was 3.2, 1.7, 3.8, 6.4, 6.1% respectively. It isn't ideal clock scaling, but I would have thought it might be even less as I thought the GPU would be the bigger factor.

Again this is at 1080p with settings typically off or normal. I never set that manually, think it picks defaults depending on the system.
Last edited by a moderator: Jul 16, 2017

Officially, I think AMD is saying anything above 1.35 vcore may shorten the lifespan of the CPU. That said, a lot of folks who don't care much about that are running 1.4 24/7. Is an extra 100 points on the cinebench score worth the risk? You'll have to decide that.
OP

I've already reverted back to 3.6 GHz 1.20v set. As said, I'm more into good enough performance at moderate power, than max power at any cost. At least if I ever do something competitive in future, I can resume testing from 3925 and maybe aim for 4000+ bench stable.

According to AMD 1.35V 24/7 up to 1.45V while overclocking this is where they say according to their model it may reduce the life of the CPU but they weren't very specific
You must log in or register to reply here.