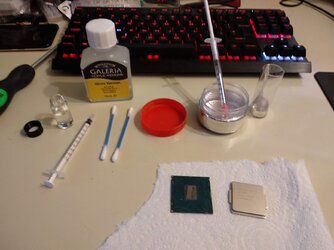 Apologies for lousy photo. My phone sucks and I forgot to check the image before moving on...

Anyway, a while back I tried to make my own liquid metal using gallium, indium and tin bought from ebay. I followed the approximate ratios listed for galinstan, and this is seen in the large tub next to the red lid. I forgot exactly how much I made, but I think it was either 40ml or 40g, at a significant lower cost per unit than commercial offerings.

This activity came out in part as I transferred parts from an NZXT Manta back into a Silverstone SG13. I had used most of the parts in there already, so it was a simple assembly job, so I thought. When I booted, the bulk storage hard disk wasn't visible, and the CPU temps rocketed under load. I had to open it up to fix the disk, and might as well sort the CPU while in there. I had delidded it previously, and had problems with degrading thermals over time when I used to use conventional compounds. I disassembled the system enough to reach the CPU, and sure enough, it looks like I used some kind of paste in there previously. Not sure, but likely either Arctic MX-4 or Noctua NT H1. I suspect it pumps with movement, especially as these are thinner pastes.

I cleaned it up as shown in the above photo using a cotton bud and isopropyl alcohol. Then using another bud, I applied a water based varnish to insulate the contacts. I chose that as it is easy to remove if I want to later, but still provides a physical barrier.

Finally it was time to apply the liquid metal. The home made stuff seemed to have a skin on top. I suspect this was because of the original ingredients forming an oxide layer which remains insoluble, but I'm no chemist and I'm just guessing. I moved a drop over with the syringe, and started to rub it into the IHS. This part seems to behave similarly to Conductonaut. Initially it didn't want to "wet" the surface, but a little rubbing soon made it do so. It was similar on the die itself. There was a minor difference here though, it seemed some patches didn't want to remain wet, even thought I could see it was kinda coated. Maybe I didn't clean it well enough?

Regardless, I assembled it, and tested again. This is NOT a controlled test. CPU is a 6600k at stock. The "before" results are worst case, with a degraded interface. Running Prime95 small FFT, three cores went immediately to high 90's (one core throttled), with the 4th core around 75C. After LM, initially under Prime95 it went to 50C on all cores. Much better! After leaving it for some minutes, it did go up to 60C, but this is because of water heating up in the 120mm AIO in that system. Upgrading the fan will be a job for another day, it is good enough for now.

Next I'll see how the home brew LM ages... note although it works out cheaper than commercial offerings in bulk, do think if you will ever use that much. Up to now I still haven't used up my tube of Conductonaut...

What do you figure your cost saving were?

A brief bit of reading - Wikipedia, so take with a pinch of salt - suggests the commercial stuff might have bismuth and antimony in it as well.

It might be interesting to try and measure the melting point.

Love it Mackerel! I'm interested in how it ages so keep us updated, pls.
OP

Real world cost savings are not going to happen. The small batch I made is beyond a lifetime supply. The cost per unit compared to buying the small tubes of Conductonaut, I can't remember the numbers but let's say it is many times cheaper.

I did want to measure melting point, but I don't yet have a good way to do so. I'd want to freeze it, then warm it up gradually. My original plan of using IR emission isn't going to work as it is too reflective. It can crush glass on freezing, so thermometers of that type aren't safe. I don't want to use metallic probes like a thermocouple...

I suppose I could do it indirectly... there is a temperature oven at work I can set to any desired temperature, and do it experimentally that way.

I love this project! Do keep us up to date.
You must log in or register to reply here.

M
Thermalgrizzly conductonaut LM install on 1080ti: what did I do wrong?
2