Since Samsung 970 EVO was released (and I sold some other drives) then I thought I will replace drives in my gaming PC which is based on TR 1920X/ASRock X399M Taichi.

I'm swiching OS and drives since yesterday and I don't really have screenshots so will just tell you what are the results.
The X399M Taichi has 3x M.2 32Gb/PCIe 3.0 x4 so there shouldn't be any issue with performance.

Sequential performance is good but deeper queue and random performance is pathetic on Samsung 970 EVO. I don't think it's the issue with Ryzen in general as Patriot Hellfire 2x 240GB NVMe SSD / Phison controller, have no problems with that on the same board in RAID0.

So I tested 1, 2 and 3 drives. Separated, AHCI, RAID, Samsung and AMD drivers. In all cases random performance and deeper queues are about the same. What changes is sequential performance which is scalling pretty good - 3.5GB/s on 1 drive, 7GB/s on 2 drives and up to 8.2GB/s on 3 drives. 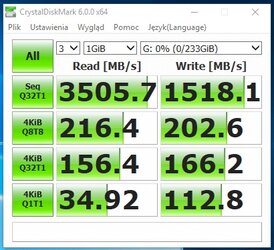 Here is what I have on 2x Hellfire 240GB SSD (result made about a month ago, I only replaced drives) 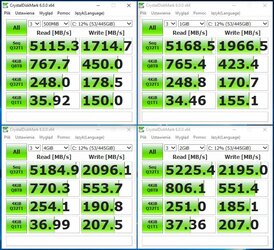 I already found the issue. It was L1.00E beta BIOS from last week. I could delete this thread but maybe someone will find it helpful. 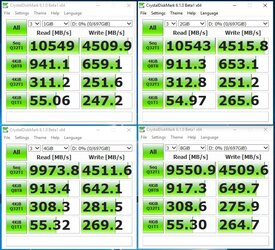