Some maintainenance and planning some retro overclocking

I'm about to go away for the new year, but I spent today preparing for a crunching challenge at PrimeGrid starting early January. I'm going to throw everything I have at it, including my older systems. The challenge is a number sieve, so is in no way Prime95 like demand. I think it is integer only.

The last system I'm preparing I call Cubit, after the Hoojum Cubit 3 case it is in. This is small, and was basically mini-ITX before it existed.
http://www.hoojum.com/new/html/more_c3.htm

Motherboard is an Aopen i945GTt-VFA This was one of their "MODT" or Mobile On DeskTop designs. It takes a mobile CPU, and SODIMMs, with limited upgradability beyond that.
http://global.aopen.com/products_detail.aspx?auno=2158 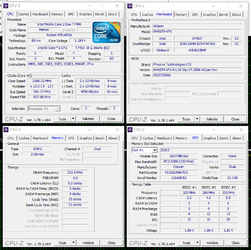 Problem #1: when running some stress test I saw temps reach 100C and thermal throttling kick in. This was never a cool system, but it never hit thermal throttle before and the ambient right now is lower than average. There wasn't any excess dust so rather than mess around further with the small case, I decided to relocate it into a Silverstone SG13 I have spare. The mobo fits with room to spare and thankfully the mounting holes still match up. The SG13 is a small mini-ITX case, but it is practically empty with the board in it, since the space provided for an ATX PSU is not needed. Load temps reduced to the mid 70's which was a significant improvement in itself.

Problem #2: I had noticed the bios kept getting wiped every time I removed power, so I finally got the battery replaced. The old one measured 0.7V which is far below the nominal 3V it should have been. For whatever reason, since doing that temps have dropped further to mid 60's. I'm not complaining!

Finally, I can consider overclocking. Here I'm venturing into the unknown. The bios has minimal options, but does allow you to change the FSB. That's it. I have no control over the ram, timings, voltages, nothing. Implicitly I'd also be overclocking everything else... so I have no idea how sensitive things were in this generation to messing with the bus.

This is where I'm going to leave it for now. As said I'm about to go do some other things for new year celebrations, but this will be one of the first things I do when I'm back.

You will have no voltage control without hard mods.
Memset will do everything memory you want.
OP

I'll look memset later, although by software changing settings, doesn't that require it to work long enough to boot first? I haven't done a hardware voltmod in a very long time. I think before I go there, I'll see where the limits are as is. I forgot to mention, the mobo came with a dedicated CPU cooler and... I think we can call it minimalist. It is screwed to the mobo so if I want to put something better on, I'd have to physically modify it to fit.

Minor correction to myself: the Cubit 3 is mini-ITX after all.
You must log in or register to reply here.

J
Planning for a New Computer Build, Looking for Some Opinions