Just looking for advice to further push my 5600x. I know you do not need to do much with these CPU's but I see benchmarks fairly higher then mine and not sure what else to do. I will link screenshots of bios and benchmarks if anyone has any advice especially with my bios settings.

Thanks for looking and look forward to feedback.

Please host the images here. Those links will disappear in time rendering the thread useless. You need to be in advanced to add images.

Where are you currently at clockspeed-wise and voltage? What are your goals? Do you prefer PBO overclocking or do you utilize all cores and threads and want an all c/t overclock? Some details would be helpful.
OP
J

Do links work for hardware? If so here is a link for my set up: https://pcpartpicker.com/list/XZggDc . I'm running Asus tuf X570 + wifi 4021 bios version. G Skill trident Z neo 3600 ram (hynix) no B-die. Lian Li 360 AIO cooler so far temps not a problem at all ( Prolly overkill for 5600x ). Cinnebench right now at 4,700 mhz m/c and 4,850 s/c. Voltage is around 1.33-1.38 when running m/c on Cinnebench and 1.25 or so on s/c. To be honest I am not sure what I should be aiming for as I mostly am using my PC for gaming and mining on downtime. I read some posts that say all I need is s/c for gaming and others that say m/c will perform better for gaming. When I run Timespy I am around 8900 for CPU score and I see others with much higher scores so I wonder if I am missing out there. (Just ego hurt with that) I tried to OC my ram not really knowing what I am doing but have it up to 3733 and seems to be running stable. I didn't mess with the timings just voltage and a couple other bios setting I read online to try out. I ran CoreCycler to set up CO in my bios and and got everything stable I am just wondering if there is more I can do to push my 5600x a bit more. The photos attached are my bios settings I have changed and a couple screenshots of me benchmarking to show info on HWinfo and Cinnebench. I guess one of the main concerns I have is are my bios settings ok to not mess up my PC as I mostly just copied ideas from forums and don't want to ruin anything. If I can squeeze a little more out of my 5600x that would be a bonus as well. Otherwise everything seems to be running great at the moment and maybe I just need to be happy with things the way they are right now.

You can increase your PBO limits PPT 300, TDC 230, EDC 230. Alternatively you could increase them to max. Buildzoid had stated that the numbers I listed were better on Zen2, but I have no idea if it really matters, especially on your hardware. IMHO it's mostly academic as those numbers are effectively much higher than anything the CPU will pull. You can see in your second screenshot you're maxing out on TDC and EDC. You can also try adjusting the scalar. I would do some more searches about optimizing PBO for your specific chip.

I don't think you need to change your voltages other than DRAM. For memory it's important to keep your FCLK and DRAM matched (DRAM is listed as 2x the speed as FCLK because its double data rate). Looks like you're doing that here. The DRAM calculator can be a good starting point, but it's not gospel, every system is different, it works for some and not for others. If you're chasing fractions of a percent in performance than it's worth it to really sit down and tweak your timings, otherwise it's not super necessary.

That probably wouldnt work very well, neither would setting to max. You could do two things.. 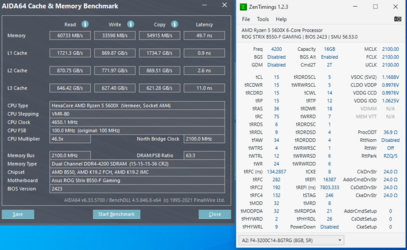