Overclockers is supported by our readers. When you click a link to make a purchase, we may earn a commission. Learn More.
N

I just registered because i'm a little desperate. I hate to make a first post to cry for help, but can't help myself

Whenever i play a game, the display driver crashes after a while. Most of the time i get the "display driver xyz stopped responding and has recovered"
(the driver that stopped is the Nvidia game-ready driver V353.62 atm) I know it is a known problem, but all the fixes i googled didn't work for me.
Just to mention: The games i play (or try to) atm are Eliteangerous (crashing after 30 min max), TES:Skyrim (crashing after about 30min to 1,5 hrs) and PathOfExile (crashing unsteady)
I also work with a 3D-Posing programm that crashes as soon as i start rendering.
Things i've checked and tried so far:

Checked CPU and GPU temperatures via MSI-Afterburner: GPU didn't even reach 70°C before the game crashed
Different driver-versions including a complete reinstall
Updating and repairing all other drivers via "DriveTheLife"
Lowering the visuall effects of windows
Memtest86+ 3 passes (1 error in the first pass that didn't occur again)
Changed from 2 Monitors to 1
Deactivated the Realtek Onboard HD-Audio-Driver
Deactivated the Nvidia HD-Audio-Driver
Checked TdrDelay: was already set to 30 secs

So that was it so far i think. I also thought about buying a new PSU because i read about LC-Power should be avoided like the plague.
Another thing i didn't try is downclocking. The GTX 750 ti is factory-overclocked and i read this can lead to problems.

I hope some hardware-pros here can help me!
Just saw my system is not displayed in the thread so here it is for integrity:

I thinking there's nothing left to do but wait for another driver to come out. As you mentioned already, it's no secret that Nvidia has had issues with drivers lately. Use to be that was a big problem with AMD cards. Now the shoe seems to be on the other foot.

The first problem I see is that motherboard/CPU combo. How hot is the VRM when gaming? What's the CPU temp?
What's the fan configuration? Include fan model, intake/exhaust, and location in the case.
What RAM speed, timings, voltage?
Have you checked the PSU with a multimeter?

ATMINSIDE said:
The first problem I see is that motherboard/CPU combo. How hot is the VRM when gaming? What's the CPU temp?
What's the fan configuration? Include fan model, intake/exhaust, and location in the case.
What RAM speed, timings, voltage?
Have you checked the PSU with a multimeter?
Click to expand...

Thank you for your quick answers!

Checked the CPU temps playing skyrim for about 1hr: didn't get higher than 40°C same with GPU
Couldn't get the vrm-temps via GPU-Z!? Maybe no sensor?!?
BTW: I ran furmark for about half an hour and the temps got to 50°C-60°C without the driver crashing.
For my cooling... watch that pic: http://media.bestofmicro.com/Y/U/312294/original/psu-bottom-05-EN.png
Its my setting besides that i have a second fan in the front panel. The directions of them is also like in the pic. My CPU-Fan is Scythe Ninja3 with a pwm-controler in the back of the pc and its set to 66% (about). The other fans were pre-mounted in the case and show the AeroCool-Logo.
I didn't measure the PSU. Does it even make sense to measure it with a multimeter? Isn't ripple one of the most important things? And: what exactly should i measure? Every single rail from 3.5V to 12V? While gaming? Maybe unmount the PSU?
Another question: What problem do you suggest with my MB/CPU-combo?

Check the temps in HWMonitor instead of GPUz, it should show in there.

Measuring the 12V is what's critical, but measuring all three rails can't hurt.
Yes, ripple is important, but so is the voltage. No need to unmount, you can use a Molex connection to measure.

Try down-clocking and under-volting your CPU to lower the power draw and see if it stops crashing. That way you will know if the VRM is the issue. Also, if you threw an error in memtest86+ then would bump the RAM voltage up a tiny bit. The RAM makers' timing tables are geared toward Intel and may be a little aggressive for AMD systems. Nanya? Not exactly a top tier RAM maker.

Post a screen shot of the following tabs in Cpu-Z please, Cpu, Spd and memory. Use the inforum hosting tool as well.

First of all the screens: 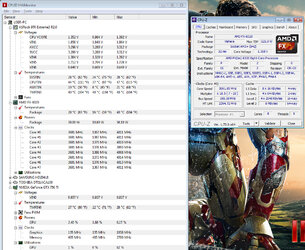 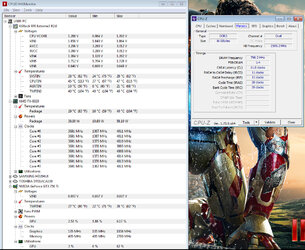 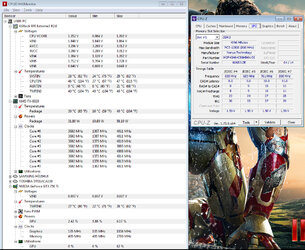 PSU voltage yesterday: 12.03V - 12.11V
Today: 12.2V - 12.31V is that ok?
And just for understanding...
All the crashes might be caused by the low-quality-vrm of my mobo. The vrm can't really handle the high amount of power that the CPU is consuming!?
And furthermore the low-quality PSU might not provide the ideal stable 12V rail that the whole system needs?!
What software would you recommend to lower the CPU-clock and voltage and bump the ram voltage? Which values would be good?
One thing i just noticed in the screens:
The mobo temps are quite low especially the AUXTIN: under 10°C?!? can't be true can it?

The AMD Fx processor temperature sensors are not accurate until about 40c when under load. This is why you are seeing sub-ambient readings, my chip idles at 7c which is impossible under ambient cooling. Load temps are what is important here. Reason I asked for the screen shots is I though maybe your Ram timings were off, which they are not. Try opening Hwmonitor and running prime blend for 20 minutes so we can see what the load temps are. Keep the Cpu temp under 70c and the package temp under 62 if it goes above it stop the test.
B

Raise voltage on your ram to 1.5. I had same issue, and I beat my head against the wall to try fixing it.
OP
N

The prime bend worked very well. Temps are good after 30 minutes. I think 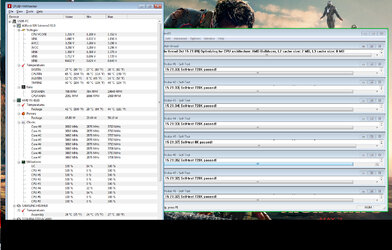 Raise it to 1.55 v, if you have some 80mm fans lying around you can put on on the VRM heatsink "to the left of the cpu", it will help get the Cpu temp down a bit.

Im just noticing the "4x4gb ram". Are they matching sets? AM3+ is pretty finicky about ram unfortunately.

bob4933 said:
Im just noticing the "4x4gb ram". Are they matching sets? AM3+ is pretty finicky about ram unfortunately.
Click to expand...

This^^^And maybe a bump in the Cpu Nb voltage.
B

On my old 8320 setup, nb didnt matter much. Seriously, I had to bump the ram voltage up to 1.6 and everything was fantastic. It took me AGES to think of messing with my ram, and I dont even remember the thing that recommended me to do it. Some kernel error in windows logs that I checked up on. I tried bumping the CPU/NB first thing, but it didnt help much.


Oh yeah, OP, bring up your event viewer logs, it'll help you sort your issues with this.
OP
N

Hey guys, my problem seem to worsen now. The whole sytem froze in idle mode. 3 times in the last 3 days. Left it running for only a few hours. But the system didn't shut down or restarted, it just froze. When hitting any button on my wireless keyboard, the receiver was blinking but the monitor wouldn't get a signal.
But back to the Ram: I bought my 4 RAM-bars all together. I looked up their manufacturing date in SPD in CPU-z. Two of them are manufactured in 4/14 the other two in 50/13. Shouldn't make a difference!?
I went through my event-viewer and i didn't find anything regarding my driver-crashes. Of course i found the 3 kernel-power-events there (event ID 41).
So what event viewer logs do you need? There are so many... my system seems pretty messed up. I'm sorry to seek so much advise for such a chaotic system.

Try taking 1 set of the two Ram out, if it still is crashing take out that set and put the other set in. If still having issues try one stick at a time. If it's still crashing and you have the option in the BIOS to do so, try shutting off two cores of the Cpu. I've seen Driver Crashes due to memory before it is possible that one set is going bad.

That board.... I had the first revision of that board, and there was no way I'd put an octo-core on it. Ran my 960T well though.
You must log in or register to reply here.

Issue with USB DAC after migrating to an x570 motherboard.

Bought a new TV, no more HDMI audio from PC thru receiver