Have I installed the SSD incorrectly?

Hi,
Few days ago I bought a new SSD and installed Windows 10 x64 on it.
With the SSD I have 2 more HDDs installed.
But the SSD is not as fast as it should be and Win 10 acts weird.

So when I recived the SSD, I connected it to the pc but left the HDD connected as well.
After that I made Win10 boot USB stick and installed Win10 on the SSD while the HDD still had Windows 7.
Then I reformatted the HDD and have the SSD with Win10.

The side effects are, Windows 10 boots very slowly, slow SSD reading/writing speeds.
Also Win10 stutters and stop responding for a few sec and then start working again.
When I press on a random app it just do nothing but after few seconds starts working.

Will grateful for any tips.
Since this is my first SSD on PC and I have no idea what I made wrong.


I have an SSD m2 on a notebook and it works prefectly.

We're going to need a lot of information to get started.

You mentioned reads/writes are slow - have you run any actual benchmarks or is this simply from transferring files? (And did the Win10 install & setup seem slow?)

^^^^ this^^^^^
and have you gone into windows settings and checked if it's updating itself?
this can slow a new rig to a crawl.
have you installed all the motherboard drivers?

Crow... create a signature that lists your hardware...


Pretty sure its modern so no ahci/ide/raid to worry about.


That said, run atto or the company software and see if speeds are normal.


The best way to install 10 is to remove power from the other drives. It can be wonky.
OP
C

All the SATA ports set to AHCI
I am a bit confused if the right one are set in AHCI since it is confusing to see the correct port number.

Also which software should I use to read SSD speeds?

Atto is one I mentioned above...

here's mine with an old, cheap sandisk. 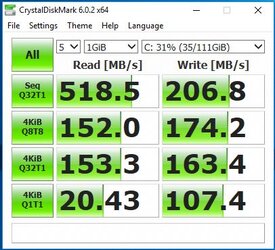 This is my test,
As you can see the speeds are weird.

The speeds are in the ballpark. Something else is wrong. Have you tried doing a fresh install of Windows with all other drives disabled as was suggested or at least implied?
OP
C

No I have not tried fresh installation.
It took me 5 hours to reinstall Windows and I am not happy about doing it again, I will do it as last option.
Also it is hard for me to believe that disabling the other drives will have any effect on the behavior of Win10 which was installed on the SSD.
With the other 2 drives cleaned.
I would assume I will have some glitches if I migrated the OS or upgraded it. yet this is a fresh install and updated.


The only thing that bothers me a little are the MOBO drivers.
They were for Win7 and no Win10 update.
They might cause problems..

1. What SATA port is your ssd on?
2. The mobo page has drivers from w10... it's a dropdown you select.
3. Installing w10 with other drives active, especially with another OS on it, can make things wonky. You dont have to believe me... but you asked and I'm sharing experiences...
OP
C

Ops..I downloaded the drivers for the wrong motherboard..
Will try reinstalling and report back

That's an easy mistake to make. The speeds don't seem bad to me but after you find the issue and get new stats it may be a big difference. Time will tell.
OP
C

the Report.
the SATA drivers don't support Win10. and there are no drivers on Asus website.
The correct motherboard model is Asus sabertooth 990FV Rev3 R2.0 "limited edition"
and they only have a new Bios file that I already installed and Audio drvier.
Every thing is only available for Win8 as the most recent OS. they do install on Win10 but the compatibility might not be 100%.
The SATA ASrock drivers are the only one who failed to be installed on win10 with error message.
I am not sure what should I do now.

I'm left wondering how some responses know the ssd performance is in the ballpark when we have no idea what specific Kingston ssd the dude has (I asked...waiting for answer).

Also unanswered...which SATA port is this ssd plugged into?

I also believe the drivers are ASMEDIA not asrock which is the 3rd party controller....and why I asked the question above...............check you manual and be sure you have the ssd on the native (non asmedia) ports.


It gets trying to help when questions we asked go unanswered.
Last edited: Nov 22, 2018

That is a Gen3 Rev2 board.
Asus gave up on that board right after it was released. Nothing but problems.
Best advice: Fresh install on your SSD with no other drives hooked up. After you're up and running and updated, plug your other drives back in.
That's as good as you're gonna get.
OP
C

Earthdog -
SSD- Kingstone SA400S37480G - 480gb.
Also- I checked the manual for the correct SATA port.
But i have no idea what are the native ports (none Asmedia)
it is not explained in the guide.

MeScott-
I bet you can make this motherboard to run on good old Scottish scotch.

But, Why Asus gave up on this board? I never had any issues with it until now.
I can buy a second hand motherboard if that will fix all my issues.
AM3+ is an old socket so there are plenty motherboards on the second hand market.

I looked at your manual and see that there are 6 native ports (it says amd chipset while the other says asmedia...should jump right out, really. )

Looking at the board and the sata ports, logic tells me the 6 brown ones are the native ports.
OP
C

EarthDog said:
I looked at your manual and see that there are 6 native ports.

Looking at the board and the data ports logic tells me the 6 brown ones are the native ports.
Click to expand...

Those are the one I connected all my drives.
I have no Idea what are native ports vs the non native ports.


Edit- I noticed finally what is happening with the PC.
When I copy any file from the SSD to other HDD or a USB flash then the speed drops to zero for a few second (in that time the windows is not responding) but the the speed going up again (then windows start responding) but after few seconds the speeds drops again to zero.
IMO this happening to the SSD all the time even when I am not copying stuff.

I'll try to reinstall Windows 10 with the HDD disabled to see if this might fix the issue.
Last edited: Nov 22, 2018
You must log in or register to reply here.