Hi! New here and looking for some experts

I've been coming back and forth trying to get 3800/1900, but kept getting kicked out of games. This motherboard seems to be capped at 3733MHz when using 1 double channel ram stick per channel.

After many hours of setting up different values, I've got good memtest results with 0 errors after a few hours.

Would love for you to check my current values and let me know if there is room for improvement: 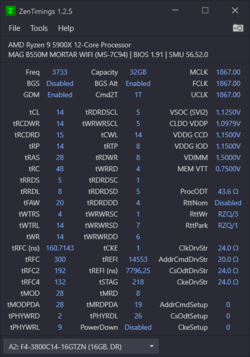 Also, for the value of this kit, I was thinking if I should rather get a cheaper one that could yield me similar results? I've seen lots of configs with 3200 sticks that can reach 3800 and good timings, so my kit seems like a bit of a waste because my mobo can't seem to properly stick to 3800/1900.

On the other hand, should I move to a Tomahawk or a slightly better X570 mobo to get better frequency using this kit? I've seen people having issues with their CPU and the infamous 1900 hole. My setup boots to windows no problem on 1900, but then putting stress on the memory ends up throwing errors, which I guess is then my motherboard's limitation.

Don't really know what to do... It's my first AMD build, and OC is new territory for me, so any suggestions about the topic would be much appreciated!

As far as reaching 3800 or buying a new lit or new mobo... it's just not worth it for the negligible gains. You play games at 1440, so the cpu/ram doesn't have too much to do with improving results there.

I'd say ride with it... but of you insist pushing through, we're here to help!
W

jotatito said:
I've been coming back and forth trying to get 3800/1900, but kept getting kicked out of games. This motherboard seems to be capped at 3733MHz when using 1 double channel ram stick per channel.
Click to expand...

You can play with CLDO VDDP, at higher or lower voltage and maybe it will help. In my case, it doesn't help with 5900X but helped a bit with 5700G.
Even if you make it work at 1 higher ratio then you won't see the difference out of synthetic benchmarks.
OP
J

Thanks a lot, both of you! I'm ok with keeping the kit then. Played a bit more and got these results with stable memtest, although I'll leave it for longer later tonight: 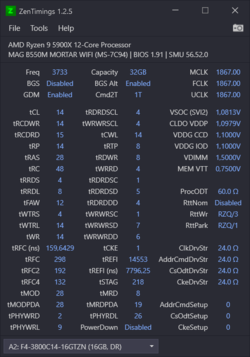 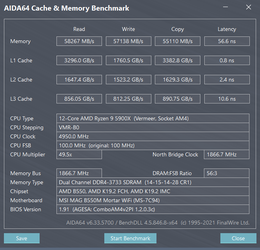 Voltages are on auto for everything except for VDIMM, that I'm keeping forced at ram stock value. Should I aim for lower TRC/TRFC? Now I'm hyped playing with this 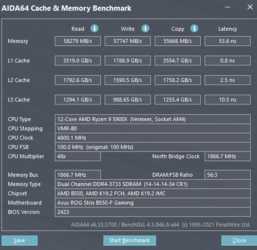 Funny is that all ASUS Strix B550 motherboards have exactly the same BIOS updates, all B550 E/F/XE/I etc. I also see that all are overclocking RAM the same with the exception of the ITX version which OC better. I have the XE version in the test rig right now, and it overclocks exactly the same as the F and E that I was testing before.

ThatÂ’s actually really good to know because the last time I looked through newegg they had different speed ratings.. nice to see they are the same. B550i looks like it would do really well. ShimpBrime has the B450i and he says it is awesome with memory, so B550i should be better. How do you like the XE? I am possibly waiting for their new X570 boards to drop and pass my F on to my son who can use it with my 5600X. If not I will probably grab another F but maybe the wifi version.

Most boards have different speed ratings even in the same 'type' of board. Real-world is where they differ. That said, all they need to do to claim it's capable is to have one kit work. The supported memory speeds should never be considered The Gospel.

Only those into the benchmarking scene are shooting for 1:2 ratio peak clock type stuff in the first place. No matter what, most any board can handle the sweet spot (DDR4-3600/3733) and run 1:1 (maybe not by default) anyway. Some board/CPU combos will of course go higher at 1:1... which is where I find more value, versus peak clocks for benching (which is what I think Woomack was saying).

I think high fclk is up to the cpu. IÂ’m sure the board helps too on the memory side.. I only have my hardware to go by though. My 5600 will do 2K 1:1 everything stable, but my 5900 needs a little work to get 1900 down, and anything more than that throws wheas. But my 5900 can handle mems at 4400 1:2. But getting back to the boards, last time I looked my board can handle mem speed up to 5100 where say the XE listed something like 4400 at one point. Even the F wifi had a lower limit than F which was a little weird to me.

Different release date and different memory kits on the QVL but ASUS is generally testing up to DDR4-4800 and above that, they have only Crucial 5100 kit which isn't even available in stores anymore and appears only on the Ryzen 4000/5000 APU QVL. I actually tested B550 F, E, XE, and I. I got the XE because all other ATX models could make 4866 max with Ryzen 5000 Veermer and I thought that the XE version will be better as it's the latest one, but I was wrong. It overclocks the same as other Strix/B550/ATX mobos. B550-I Gaming is something totally different and it beats higher ROG mobos. However max 1:1 clock with Vermeer is limited by the CPU, all mentioned motherboards can make much more with 4000/5000 APU.

Anyway, B550 is a bit better for overclocking than X570. What can be better on the X570 side is that top brands care much more about BIOS tuning so some X570 models are also good. For example, Strix B550-I is overclocking RAM better than Crosshair VIII Impact that costs twice as much. 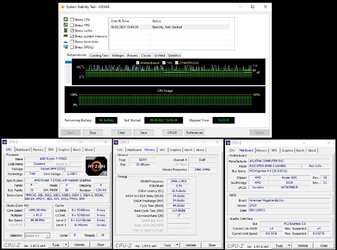 I'm aware it's a bit offtopic
You must log in or register to reply here.

Needs some help to overclock on Trident Z Neo kit