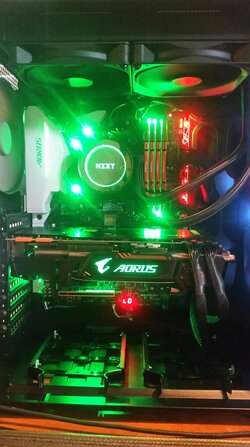 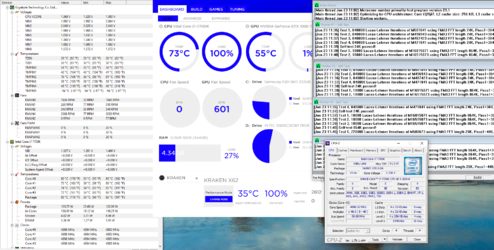 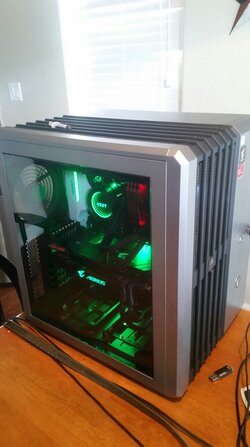 So the new system is in my Sig.


I am pretty dang pleased with this build. It was the smoothest, fastest, and easiest build I have ever done. Everything appears to be working as advertised.

I absolutely love the case, wire management was super simple and super fast. Of course the side of the case is stuffed with wires though but the side panel window looks great.
I was originally concerned about the size of the case but i am quite satisfied with it, a mid tower height and just about 3 or 4 inches wider than full tower i was on.
4 slots for 2.5in drives in the back 2 slots for 3.5in drives in the bottom of the front. I have always had a hard time finding integrated solutions for mounting with cases that I actually like visually. They perfected it with this one. The PSU is side mounted with vents on the panel for the fan. I feel like they really put some thought into this case. The only things i could say is they probably could have shaved another inch or so off of the side panel window (just to make it a little less wider) and I wish there were more USB ports on the case and preferably on the back above where the PSU is, but that's nothing a PCI card cant fix i suppose.

The motherboard hasn't let me down in any way, has a lot of features I will probably never use. I never cared for integrated graphics but that seems to be the new thing with z270 boards, suppose it would be nice to have if my 1080 ever dies.
I really like all the fan headers, the LED lighting, and the overall look of the Aorus series. I haven't tried the sound card on it yet, my speakers are still in my house hold goods waiting to arrive, but I'm sure it will be just fine (I'm half deaf anyhow so probably wont notice any sound quality differences lol) I am still trying to get used to the BIOS since I haven't touched a gigabyte board in quite a while. Mouse seems a bit clunky and not very responsive in the BIOS, but I prefer the keyboard regardless, I'm faster with it anyhow.

Well the processor... the 7700k is pretty powerful. As I'm sure most of you know the temperatures are pretty freaking high. From what I have read a lot of it can be attributed to bad TIM under the lid and the gap the sealant makes. I have got mine to 4.9Ghz with the uncore at 49 as well at 1.33Vcore (HWmonitor reading up to 1.38). Temperatures got just over 90C(depending on the FFT length) on the default blend from prime 95 but ran stable for 40 minutes with no errors. After 4.9Ghz it doesn't seem to care how much voltage i throw at it core 2 fails anywhere from 1 minute to 4 minutes into the burn. If anyone has any further advice on getting it any higher. Really haven't done much other than turning off a few CPU features in the BIOS, upping the Vcore, and turning up load line calibration. I don't plan on delidding this processor, I am still debating getting another to see if I can get closer to about 5.2ghz and if I can I will delid that one.

The graphics card, well not a lot to be said. Its a GTX 1080ti, its pretty freaking awesome. It doubles the performance of the two 780ti's I had before. 3Dmark Timespy scored a 9088 and Fire strike ultra got 6955 compared to the 3562 from my old system. Haven't overclocked it not sure if I will, didn't have much luck with either of my 780ti's so I left them at stock settings will probably do the same here. Will do an edit later here about temps under load, but I am pretty sure the Aorus HSF is pretty adequate for this thing, looks pretty nice but I am pretty sure the back of the card is sagging from the weight.

The RAM, another 4 sticks of G.skill that does exactly what they said they would at the cheapest prices on the market... cant beat that.

So, the Samsung 960 Evo m.2 250 NVMe... I was warned, not really much difference noticed from any other SSD. But ill be damned if windows doesn't load up in about 3 seconds lol. It was new tech to me and really wanted one plus I love the fact that I have a hard drive attached directly to the board, can't exactly pin point why but I just love it.

NZXT Kraken X62 I am not to impressed with the temperatures I am getting with it, thinking the AIO's are pretty much just to say you have watercooling. I think it does a bit better than what an aftermarket HSF would and definitely looks better. Don't care too much for the CAM software that you use with it. But it looks nice. The temperatures might be a bit attributed to the processor and its ability to dissipate the heat through the lid. I did a few tests with the fans off for the radiator to kinda see how fast the water gets hot and it didn't seem like it was heating up very quickly. I don't really have anything to compare how fast it should heat up but just in general I figured if it was pulling heat from the processor efficiently as it could it would have gotten hotter faster than what it did.

And finally the PSU.. I'm sure most would agree EVGA is the way to go with the PSU these days. I think there was a sale on the 850 when i bought it, around the same price as a 600 something EVGA PSU. Should be plenty of headroom for a second GPU if I ever decide to get one. One thing I did not like is for some reason this came with two 8 pin cables, and two 6+2/6 pin cables. The 1080ti requires two 8pin connections so the two 6+2/6's are useless for this card and will have to get more cables if i want to get another 1080. I am not sure why those last two cables were not 6+2/6+2.... I am using the two 8 pin cables on it now.

Thanks for taking a look. If you guys have any suggestions or comments please feel free to share, especially with the processor/temps/OC.

Why wouldn't the two 6+2 cables work if adding another 1080 video card?

So im using the two 8 pin cables on it now the remaining two cables have a 8 and 6pin not 8 and 8. In order to use another 1080 I could use those two cables but I would have two huge 6 pin connectors flopping around in the case
Last edited: Jun 23, 2017

So I guess I'm confused. I understood you to say you had two 8+0 GPU connectors that you are now using on the current card plus two additional unused cables that were both 6+2. 6+2=8.
You must log in or register to reply here.