What controls the Ddr4 Channel Voltage on Haswell E, CPU or Motherboard?

reason Im asking this question, Is i recently had a power surge via lightning strike outside the house take out some networking equipment and seemingly kill my NIC. I went out and purchased a replacement motherboard and everything posts correctly (even ran realbench for a small run just to see if it would error out) and it came up good, no errors. In bios it shows fluctuating ddr4 voltage which I had not seen before, and only in one channel (channel A/B fluctuates while C/D does not). Before this catastrophic event to my equipment I never remembered seeing any fluctuation at all in bios and even loading up programs such hwinfo64 shows missing modules (even though the total installed memory amount is correct) under the memory tab and sensors show the same fluctuation with one channel A/B consistently having 1.344v (set to 1.36 in bios) while channel C/D seems to stay at 1.36. However if i go to windows task manager it shows 16gb (I have a 4gb by 4gb set) and even Cpu-z reports all SPD properly from each module under spd tab and memory at 16gb installed under memory tab. Question is if my memory controller was damaged, what would be the most conclusive way to test it out. the voltage fluctuating thing I never saw before, and don't know if I should be returning the motherboard or getting a replacement cpu or both/neither...Please advise.

Also I have reseated cpu, and flashed a few different bios but the problem (if it even is one considering i never noticed it before but dont know how much fluctuation if any is ok) remains. also I took out all remaining sticks of memory to test each slot by itself and it only manifests the problem with reporting in hwinfo64 when 3 or more sticks are present. I am currently testing with memtest in windows with 12 windows open using 90% of available memory I would assume if there was a IMC problem it would manifest itself.

i Reinstalled my old X99a Gaming 7 which had the dead NIC, voltages were stable in bios and in software, there was still the odd issue of one of the memory sticks not showing up in HWINFO64 under memory tab or in the drop down tabs which show spd but it did list Memory as 16gb which is the correct amount, and windows and cpuz both list the proper amount also and which i select the respective slot it brings up the proper SPD and module info, must be a bug in HWINFO64...the voltages fluctuating from what they are set (ddr4 channel voltage) is another thing and I will return the new motherboard tomorrow to see If it fixes the problem, if not i guess its related to the CPU voltage regulators but without any input from here im just guessing.
Last edited: Aug 11, 2016
T

I would buy a Tripp Lite Isobar, affordable and it could save you the headache if this happened again. I live in Florida, lightning is an almost daily occurrence. 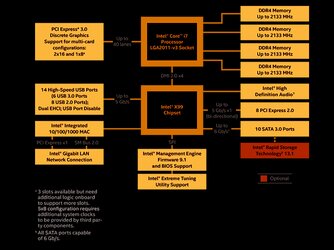 C
Can you help me to speed up the timings of my memory for gaming ?