Why is my setup running so much higher than ambient?

So to start with, I know my water loop needs redone.

My CPU (5820k on stock OC Genie) idles at 43C. The ambient temp is between 70F and 80F on a normal day this time of year, so 21-26C. I have a raystorm waterblock, xspc 360 radiator with 3 thermaltake RIING12's mounted to it, and a resvior d5 pump combo from xspc. It used to run pretty close to ambient a couple years ago. Since then I have switched to rigid tubing, and my return from the radiator to the res is stupid long because my brother in law thought it would be cool to run it the way we ended up running it. Anyways, I noticed with rising ambient temps it went from idling at 32C to about 40ishC. I noticed build up in the res, so I decided to take apart the system, clean the waterblock, res, and radiator and upgrade to the thermaltake RIING12s. I thought it might net me a few degrees cooler.... but to no avail. The thermal paste I used was arctic silver, but it is a couple years old. Should that matter?

Will a shorter return line have that big of an impact on the temps? When i stress tested even the stock OC (3.8) it hit 60 degrees almost instantly and was still climbing, so i shut it down. I know 60C isnt harmful, but it was climbing fast and I expected it to stay cooler, so it told me what I wanted to know already. 2 years ago I was overclocked to 4.7ghz and it stayed under 60 in 95F ambient temps. I already have more tubing on the way to fix it when I have a slow week during school 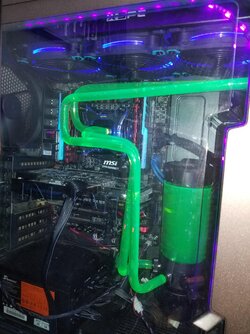 That extra distance shouldn't make much if any difference in temps. You were having the same problem before removing the block so I doubt it's the TIM. My guess would be poor airflow or water flow. Did you make sure the block is connected properly I mean the IN and OUT are on appropriate tubes?

the raystorm has what looks like a "v" above the inlet.
OP
R

Johan45 said:
That extra distance shouldn't make much if any difference in temps. You were having the same problem before removing the block so I doubt it's the TIM. My guess would be poor airflow or water flow. Did you make sure the block is connected properly I mean the IN and OUT are on appropriate tubes?
Click to expand...

Yeah the In and OUT are connected properly, the block actually says IN under the inlet side so i know thats right. I have a total of 3 fans in the front of the case blowing air in, the 3 mounted to the radiator blowing up through it and out, one behind the motherboard blowing warm air out (was going to turn it around and see if it helped, but screws are stripped) and the one at the back blowing out. Changing fan speeds seems to do nothing for the temps.

Isn't that kind of a big difference in cpu temp and ambient at idle? Or would you say that is more normal? Should I not be concerned about the jump during the stress test? The performance has definitely dropped in the past 6 months. It was still hot out when I switched to rigid tubing and it was performing much better, though I dont recall the cpu temp vs ambient, but the stress test stayed under 55C at 4.2GHZ
OP
R

I guess the radiator could be dirty, but when I rinsed it out with vinegar and water, it felt and sounded like it flowed pretty freely. All I am doing right now is searching google, this page, and listening to music and im sitting at 47 degrees. Do you think a new radiator or new pump/res combo or both would fix this? I had distilled water with some mayhems concentrate dye with whatever inhibitors were in it, i dont remember, prior to cleaning the waterblock. It now has XSPC EC6 liquid. No difference in temps
Last edited: May 11, 2017

Is yor pump being controlled via pwm ?
Did you clean the pump when you cleaned the rad's?
What fluid are you using?
OP
R

I had distilled water with some mayhems concentrate dye with whatever inhibitors were in it, i dont remember, prior to cleaning the waterblock. It now has XSPC EC6 liquid. No difference in temps. I cleaned the pump about a month ago when I switched it to DW and the mayhems dye, it wasnt too bad. I was too nervous to take the waterblock apart at that time, but since the temps remained the same I figured it needed done. It had a little bit of gunk, but I was expecting and hoping it was worse.
The pump is connected via system fan header and I set it to 5. It shows 4770 RPM

I'm thinking a bad block mount.
I use the same pump/res combo in a gpu/cpu loop and get about 100-150 rpm less than you so i don't think you have a restriction.
what are you monitoring the temps with?
are you sure you are not seeing the socket temp, can you give us a screen shot of it please?
oc gene stock, what's the vcore? software overclocking will give high vcore and temps.
OP
R

hmmm possibly making a newbie mistake. Im taking the temp from the led readout on the mb as well as MSI Command Center, but looking at the core temps now, they range from 33-37 but even so the performance has degraded considerably in the past year.

A few things come to mind.

First, you will degrade and probably already have with that high OC.

Second, your MB's auto OCing is the worst thing to do. Majority of the time, MB's will pump way more voltage to a auto OC than it needs.

Third, a rise in ambient temp will rise the rest of the system because the "fresh cool" air your rads are being fed is exactly that temp. All you can do with a liquid cooling system is to improve the delta-temps as best you can. I think with a setup like yours, you've achieved that.

I would make sure everything is cleaned and that includes the CPU WB. The problem with dyes is, they sometimes gunk everything up and the most difficult part to clean is a radiator because you can't stick your hands and eyes in there as you would with a WB or pump.

There are obviously many variables that could be going wrong for you and at worse, a combination of them.

if you are on win10 any bsod's will corrupt the system very quickly and cause issues so before condemning the chip, try a reinstall.
I have had a single bsod crapify my rig.
OP
R

Should I replace the radiator or just add a second? I figure that one should be large enough by itself

caddi daddi said:
if you are on win10 any bsod's will corrupt the system very quickly and cause issues so before condemning the chip, try a reinstall.
I have had a single bsod crapify my rig.
Click to expand...

Ive had lots of bsod's with win10 messing around with oc and it never messed up system were windows wouldn't boot anymore
The only way I could see that happening if it bsod during a major update install
Last edited: May 15, 2017

are you certain that you have gotten all of the air bubbles out of your loop?
You must log in or register to reply here.