Computer boot looping, shows bios for a second then restarts.

Hey guys. I was playing a game on my PC when all of the sudden, it bluescreened with the code "DRIVER-IRQL-NOT-LESS-OR-EQUAL". Now, it was just CS:GO, so it wasn't a struggle at all on my pc. Now, all it does is boot loop. I put my buzzer/speaker in to hear anything it has to say, but only a single short beep, as it always does when it boots up. I know quite a bit about computers, but this one has me clueless, considering that my motherboard, video card, cpu, and ram are only 1-2 months old. One more thing to mention: The two digit display on my motherboard displays seemingly random letters and numbers, and it seems different each time i turn it on. Here are my specs:

Other specs probably important, besides that I have three monitors hooked up, I have a large case with a total of 11 fans, and I have a 240mm watercooler on my CPU.
Other info: I've NEVER done overclocking in my system, besides the OC button on my mobo which i did once and turned it off.
I've tried re placing the RAM, turning off the PSU and restarting, resetting CMOS, and taking out the battery for ~25 seconds.

Sometimes the boot lasts longer then normal. It occasionally will go into the windows "repair" menu, but seconds after, it just boots off, and restarts.

My mind tells me it's the fault of my old PSU but before I go run out to buy a new one, I'd like to make sure it isn't any of my other parts because I have a warranty on basically everything else.

Feel free to ask me ANY questions you need to know, I'd be glad to answer. Thanks for reading, and hopefully you can help.

My mind tells me it's the fault of my old PSU but before I go run out to buy a new one, I'd like to make sure it isn't any of my other parts because I have a warranty on basically everything else.

Before I even got to this line in your narrative, I was thinking PSU. It may not be able any longer to supply enough power to finish the boot.

Get a quality PSU by Corsair, Seasonic or XFX or EVGA. It's a foundational component. If a PSU goes it can take out other stuff. If you are only running one video a card a quality 500W PSU will be plenty enough.

I honestly don't imagine it to be a PSU issue. There is very little power being used when at the bios... the 'hard part' is already past (drive spin up really). If it was the psu and it was in that bad of shape, i'd suspect you wouldn't see the bios.

Are you able to get into the bios at all when pressing delete? Can you try removing all hdd and see if you can get into the bios? I say this because you are seeing the windows repair screen which if you see that is past the POST and BIOS....

That said, the silent pros weren't great, they were ok. But considering that system cranked would barely break 300W, I doubt it's the psu unless it is in fact going bad. I'd try some free fixes before you get another psu....that may be the issue, but I'd try free stuff first....which includes trying another psu if you have one laying around the house.

That evga trents listed is exactly what I would get. That's a tier 1 psu with plenty of power for a single card, including overclocking.
OP

Well because I was out, I stopped by bestbuy for a new PSU because even if it isn't the fault of the PSU, I would still rather have a new one rather than the one I bought off of craigslist. Also to answer your questions, I am not able to enter the bios screen. Before I left, I noticed that every time my computer rebooted, my GPU light would flicker, which leads me to believe that it's the power supply. Also, removing my extra hard drives and accessories did not change anything.

So was it the psu?
OP

EarthDog said:
So was it the psu?
Click to expand...

Unfortunately, it doesn't look like it did anything. However, when I went to turn it on, I was able to go into the bios and look at some stuff before it just gave out and restarted about 20 seconds after i entered. The weird thing is. the RGB light on my watercooler is red, and the only occasion it would go red, besides if you were to assign red as it's color, would be if there is a problem with it or the temperatures. I'm looking into what could be the problem, although I still need some help.
OP

Alright, well I fixed the problem with my watercooler (I'm an idiot and forgot to plug in the sata power for the motor inside it).

I decided to try a fresh install of windows. I put a fresh copy of Windows 10 onto a 16gb flash drive, then I popped it into the computer. When selecting the UEFI option, it boots for about 10 seconds, then bluescreens with the same error "irql_not_less_or_equal". Now, I'm thinking it's a problem with the motherboard. Any advice? Thanks.

That sata power plug on your pump was never plugged in? And you ran your PC like that for a time? Or was it just unplugged with the PSU replacement/recently?

Try running on the integrated GPU using the motherboard ports instead of the discrete GPU (literally take the GPU out) and see if it still happens (you mentioned a GPU light flickering earlier I think).

In your first post where you describe the troubleshooting measures you have tried, you did not mention if you tried removing or swapping out the video card with a known good GPU. At least try using just the onboard video without the video card.

My guess would also be the motherboard as leaving a water cooling pump disconnected momentarily usually doesn't fry a CPU.
OP

I already tried to use onboard graphics. Just to make sure I did it again just to make sure, and nothing different happened. I made a quick video (~30 seconds) showing the post codes and my monitor. Hopefully it can help.

What you are seeing there is happening after the POST it seems. I say that because you are seeing the windows loading circular spinning thing a majobber p) in the BIOS splash screen. That doesn't happen until you are past the POST. I assume your HDD you are booting off of is the 850 Evo right?

After thinking a second, you pulled ALL the drives off and still have the same problem in that you cannot get into the BIOS? Hmm....

That sata power plug on your pump was never plugged in? And you ran your PC like that for a time? Or was it just unplugged with the PSU replacement/recently?
Click to expand...

It's posting.
You need to get into the bios and turn off fast boot.
OP

Got into the BIOS, it doesn't seem to have issues getting into it anymore. Here's whats up: 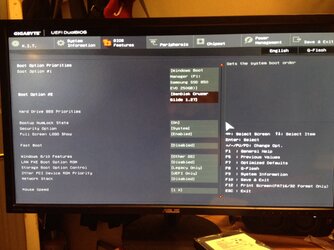 Are you on the latest BIOS? Try flashing it now that you can reach it...

But if you are getting into the BIOS just fine now (something had to change if there was a problem), and it happens as it does in the vid, I'm thinking more bad HDD or something. You installed the chipset and ME drivers, right?
OP

Yeah, I re flashed my bios to the latest version around two hours ago, still no changes. I don't think it's a HDD problem because it bluescreens even on windows 10 installation media I made. I also tried only one memory module, still no changes.

My guess at this point is motherboard or CPU... and its more likely the motherboard.

For clarity, when you tried one module, you tried them all and in the correct DIMM slot for a single module, correct?
OP

Yeah. I put it on DIMM 1. I'm going to call gigabyte tomorrow and see if they can help. Although, if the cpu was bad, wouldn't I not see anything on the screen? Also, to answer your question before, the cooler was only unplugged because I replaced the PSU. My pc was on for about 30 seconds before I realized and turned it off.

You don't have another socket 1150 CPU do you that you can plug in to test for CPU damage?

Hmm... he would have to had changed the BIOS option to IDE as these boards all default (including yours/Z97) to AHCI. Prior to the system going down though, it worked fine.
You must log in or register to reply here.