After about 6 months or so of air cooling I've decided to go back to water cooling. Now that I am back at the office I will be using the system mainly for gaming and play but still want a work pc without making a whole separate computer and buying more monitors. Plus I have most of the parts needed from when I disassembled my last build so I figure why not. I bought a new Phanteks Enthoo Pro 2 because most of my cases are older and really won't fit both systems and the loop. I've been kicking around trying a build like this for a while but never could find a case that would fit it all the way I wanted until I saw this one.

My plan is to use my current system (Intel i7 11700K, ASUS Strix Z590-E, Team Group Dark Z FPS PC4000 16,18,18, 38, eVGA RTX 3080 FTW3 Ultra) as my main with a smaller ITX build consisting of the leftover parts I used to build my work at home pc during lockdown (Intel 4690k, Corsair Dominators PC2100, on chip GPU) as my work computer. The work stuff is old but is basically just a thin client used to remote in so doesn't need to be much. Then cram it all into the same case and cool it with one big loop. Due to time and money constraints the build may drag on but here goes nothing.

First a pic of the case. This thing is amazing! Purpose built to hold two systems, water cooling and a ton of radiator space I'm not sure it is designed to fit all the radiator I plan to cram into it but with a couple tweaks I think it will fit well. After playing with it for a while I like it even more. 480 radiator space up front, 360 up top and room for another 360 on the bottom without the second system. As usual Phanteks includes everything and then some with the case. A complete extra set of screws in a nice little case, magnetic dust covers, all the drive cages I could ever need but not installed in the case so I don't have to waste time removing them, wonderful wire management choices and a nice clean look to top it off. It even includes a precut drain port hole in the front which is a nice touch. This is my third Phanteks case and all have met my needs perfectly. My only complaint with this one so far is all the plastic pieces. I don't mind plastic but my older Phanteks cases at least had aluminum covering the plastic on the outside where this has a brushed plastic look. 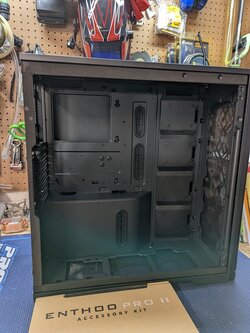 I guess a good thing about all the plastic is pretty much every piece can be removed down to the bare metal cage where metal pieces would most likely need cutting. For example the front cover didn't fit with all the fans I want for this build so instead of cutting up the front I was able to pop out the dust cover and the mesh backing piece to add enough space. On the other hand, if it was aluminum it wouldn't need to be so thick. I can live with it though.

The case is designed to have all the fans inside the case with the radiator but after fitting the radiators where I want them this isn't possible so I moved the intake fans to outside of the front of the case. this is why I had to remove all the front backing. It leaves the mesh guard to move freely but once the front is snapped into place the fans keep just enough pressure on it to keep it in place while not interfering with the fan movement. Here is a pic when I was test fitting the front over the new fan location. 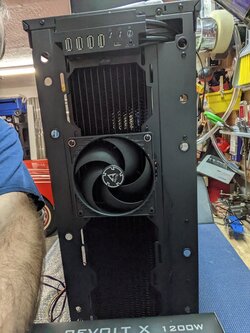 Again, the case is designed for the fans to be inside so I can't put a fan in the top spot with the 480 radiator but I'll offset that a little with some push/pull on the other slots. Pic of the inside with the 480 radiator in place. You can also see where the mini itx system is mounted and the rough pump location. 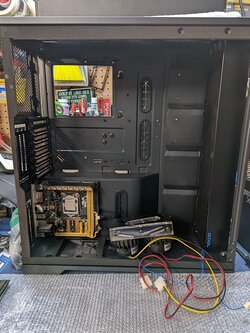 As you can see the radiator goes from top to bottom but fits well. I would prefer to remove the bottom radiator mount to give me a little more room but that will make mounting the pumps harder because it will leave bare mesh down there. Now starts the cramming when I test fit the 360 rad on the top. 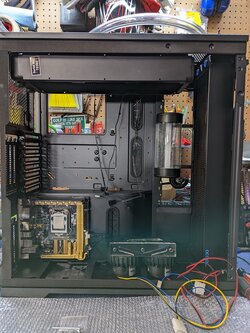 For the first time in any water cooling build I am going to use 90* turns but they just can't be avoided. Also had to create some more fan holes in the top to mount the rad a little farther back in the case but the included dust shroud covers those fine. It also makes it impossible to mount the rear exhaust fan inside so I am moving it outside with a finger guard. From this angle the radiators look a little closer than they really are but I should be able to get my 90* fittings in there pretty easy. This also shows about where I am going to put the reservoir.

Post magically merged: Jan 17, 2022
Here is the PSU that makes all this possible and what finally nudged me to do the build. Phanteks/Seasonic 1200w dual system PSU. Its a pretty neat setup with cables for both systems in one PSU. 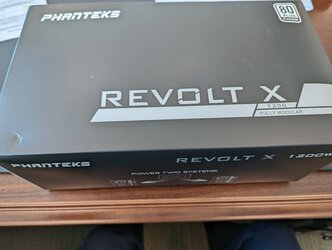 The rest of my fittings should be in by this weekend so hopefully I will make some progress. Still trying to decide which GPU block to go with. I swore off ek after a bad experience many years ago but it seems they may be my only choice for a block to cool both sides unless I go with Barrow or Bykski.
OP 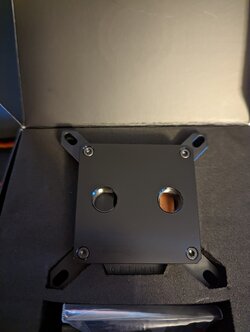 I finally got some time this weekend to work on the build. I decided to change the reservoir from my trusty XSPC Photon to a different style with more inlet and outlet holes. After buying two versions of Bitspower reservoirs I decided to use the standalone so I can get rid of the U fitting and draw from the top. I think it really cleaned up the build and also allowed me to add a drain port which was important to me with this build. I didn't add one to my last build which made for cleaning and swapping fluid a real pain. Also added a simple flowmeter at the top instead of a plain 90* as planned. I figure it looks better than just a plain fitting. 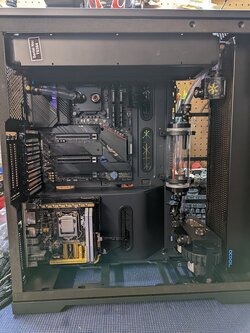 Next part was to remove the monster air cooler from the gpu and clean it all up. It took forever to get all the cooling goop off the card but sure looks nice with the new Alphacool block on there. I prefer to run all copper blocks but that proved difficult these days so I had to go with nickel plated. Also my first time using an Alphacool block. 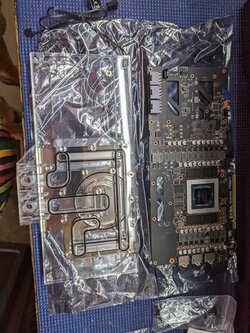 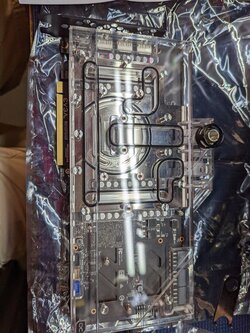 Another first for me was using a pressure testing unit for leaks and so far I love it! Because of all the pieces and complexity of the build I was able to test for leaks as I go and after complete. For example, before I installed the final pieces I was able to test the radiators and reservoir and found the reservoir top had loosened a little while installing tubes and fittings so it leaked a little. Nice to find that out before using fluid for sure! Here's a shot of the full loop while sitting at pressure. 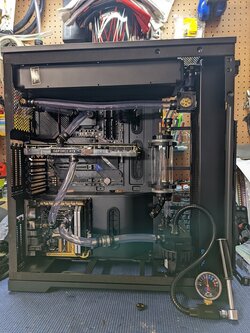 I let that sit for about 30 minutes then I filled the system with Mayhems Part 2 to clean everything out. The filter at the bottom will be removed after the cleaning run for a solid tube. It turns out the cleaning run was a good thing because there appears to be some white bits in the fluid. Its probably just leftover sediment from the top radiator which I used in a previous build but still nice to get it out of there. I forgot just how much the Mayhems bubbles but it slowly cleared up later. 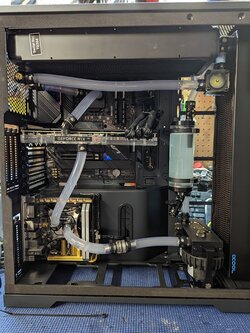 So I guess I needed a little reminder of how water flows to realize a drain port needs to be at the bottom of a circle not midway up. 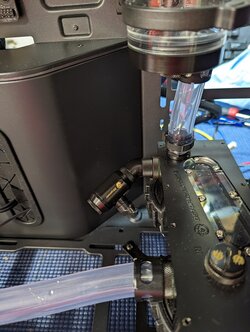 I had to move my drain port down to the pumps. Other than it being upside down I actually like it there. I could add another rotary to get it the correct way up but I think I've spent enough on this build already so it stays as is it. It was on the bottom of the reservoir before. Its still a pain to drain and fill but I figured this would be difficult because of all the turns. So far this has been the single hardest loop to fill and drain of any loop I've ever built. It took me 2 hours last night just to get enough air out of it to run semi-normal. Not 100% sure what it is about this loop because I've used designs like this before but it sure is a pita!

Anyways it is filled with coolant and running all the air out today. Still shook some big bubbles out this morning after letting it run last night but hopefully when I get home today it will be fairly clear.

Also had something hit me last night while staring at it. The pumps run directly off the power supply so they will run regardless of which system is running since the single PSU runs both. The fans on the other hand run directly off the motherboard and at this time all run off the main pc up top which will be a problem when using the lower system. Granted that is going to be a stock 4670k so not too much heat but add the pumps to it and the water may get a little warm over time. To try to remedy this I am going to add two pull fans to the middle of the front radiator wired to the lower motherboard. If that doesn't work I'll try something else but I think it will.
Last edited: Feb 16, 2022
OP

I worked from the house today so I had plenty of time to work on the build today. The loop is done and running so it is time to tackle this mess: 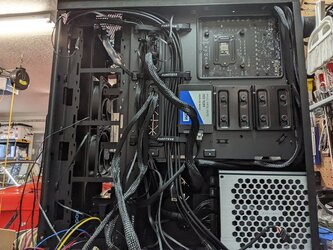 That done I got the front all cleaned up and wired. This motherboard has a temp sensor plug on it so Installed a stop fitting with a water temp sensor in to the bottom of the res which was a nice bonus. Not that I will obsess over it but neat anyways. 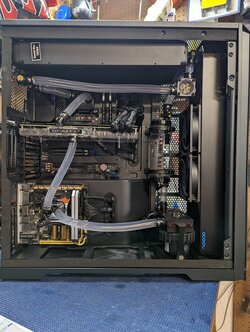 She lives! Out of my three RGB enabled builds this the first one I've been able to get everything all synced up and it was by pure accident. Regardless it looks great all synced using the Asus software. 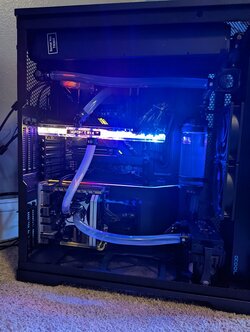 Still testing temps but at idle everything seems nice and cool.

Dam Bugsy! Sweet build! I love that case so much I'm getting one! You know me, I love 'em BIG! I have a secondary 480mm rad I've been wanting to put into service for when I get a new GPU. This is the perfect candidate to upgrade to!
OP

Thanks. You will love the case. It really gives you unlimited choices for a build.
You must log in or register to reply here.