Found a (nice) surprise. I was asked to try forcing AVX2 (disable AVX-512 in bios) and the results there are much better than expected. Still on Prime95, AVX2 IPC was about 25% higher than Comet Lake. I didn't expect this, expecting no significant change. AVX-512 is still faster at about 42% increase. For comparison, Zen 2 is about 4% and Zen 3 is about 14%, but take Zen 3 value with less certainty as I had to rely on other's data.

The working assumption is that the bigger lower level caches are helping out with AVX2 compared to previous, assuming there is no extra execution resource. AVX-512 offers even more registers that can be used.

I also found the memory limited AVX2 + gear 2 results in Prime95 were about as good as AVX-512 + gear 1, where AVX-512 + gear 2 was about 7% worse. I have no idea what is going on now and I'm not interested enough to investigate that further. I'm still tempted to throw in more (slower) ram to that system for my longer term needs.

I have yet to see a single review take a look at the new Xe integrated graphics performance against an AMD APU or low end discrete. Not that I have big expectations for it at all.

Thinking I'll be waiting a long while for something to make me want to upgrade from my 9th gen.

I don't know if that is enough to hint at anything yet. I'm about to swap ram yet again, to 2x16GB 3200 which I'll force gear 2 to start with to be on the safer side. The commonalities in crashes so far had mining running, yet that made it through overnight without problem. None of these conditions had significant CPU usage.

I'm not aware of any significant wider reports other than the tweet below, but that might also be in part due to not many being in end user hands yet.

Voodoo Rufus said:
I have yet to see a single review take a look at the new Xe integrated graphics performance against an AMD APU or low end discrete. Not that I have big expectations for it at all.

Thinking I'll be waiting a long while for something to make me want to upgrade from my 9th gen.
Click to expand...

I guess you are not the only one. I find everything with K, or higher clock worse than 10th gen (at least for most users) and 10th gen wasn't really interesting either but wasn't so hot and could run at a higher clock. Lower chips are working fast enough for games and are running at much lower wattage/temps. With better IPC and better scaling memory (at least on higher motherboards) are better at about the same price as the last-gen.

About memory stability. On ASRock Z590 Extreme I could run DDR4-4600 stable for 3h+ without any issues and it was simple auto/XMP. However, I see that high memory frequency requires high SA and some other settings. I have no idea where is the limit for safe voltages as the IMC has been changed. For DDR4-4600, auto SA is 1.5V. To make it run at 5200, I had to set 1.65V. At 5200 and quite relaxed timings like CL21-28-28, I could make 72GB/s read, 74GB/s write, 69GB/s copy, and ~52ns latency in AIDA64. This actually looks great, something like quad-channel at a lower frequency.
I don't know what about other motherboards but on ASRock, I couldn't set Samsung or Micron at more than ~4800, even sticks that could run at ~5600 on AMD. Only Hynix DJR could pass 5000 and was quite stable at 5200(passed all tests without errors but I wasn't testing it for stability), but couldn't boot at 5333+. This is exactly the same kit as currently has the world record for memory clock (just another kit obviously, so also nothing cherry-picked).

One weird thing. On Supermicro Z590, I could run 4.9GHz/all cores+AVX at ~1.2V (1.1975 in BIOS) and temps on 360 AIO were ~95°C. On ASRock Z590 Extreme, I had to set ~1.3V but the CPU wasn't stable at more than 4.8GHz/all cores+AVX and temps were also ~95°C. I wonder why the difference in voltages is so big while temps are the same. Hwinfo64 is confirming the difference in voltages. In both cases, the CPU was working at about 250W. I wasn't expecting that ASRock will OC worse but some reviews say the same about the most expensive motherboards which are overclocking worse than anything cheaper. It can be also a typical beta BIOS stage.
Last edited: Apr 12, 2021

Voodoo Rufus said:
I have yet to see a single review take a look at the new Xe integrated graphics performance against an AMD APU or low end discrete. Not that I have big expectations for it at all.

Thinking I'll be waiting a long while for something to make me want to upgrade from my 9th gen.
Click to expand...

After the website rollback, all results disappeared and I don't remember what I was posting here. I don't want to make a separate thread for single results so since it's related then here is the new Hynix dual rank, Silicon Power 2x16GB DDR4-3600 CL18-22-22 @DDR4-4800 CL19-25-25 on MSI Z590I Unify. On the same mobo, I made DDR4-6400 using single rank HyperX/Hynix DJR memory so the motherboard is not limiting this RAM. 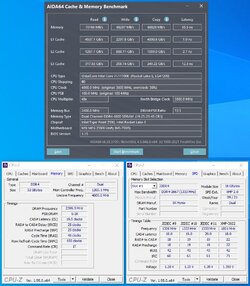 Not much tweaking. Almost only main timings so can make some more with better subs. I assume that 2-3GB/s higher bandwidth and maybe 3-4ns less. I will play some more later this week.
At least these settings seem stable and passed ~4h various tests and benchmarks based on games. 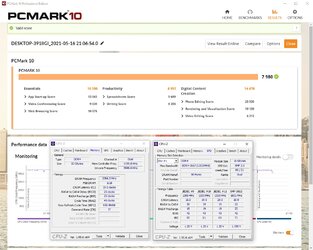 The same IC can be found in other inexpensive kits from the new series. Just to add something, the same maximum and stable clock I could make on some single rank Samsung B kits while my dual rank Samsung B can't even boot past DDR4-4266. I'm not saying that the new Hynix is better than Samsung, I guess it's just a matter of user's needs. For sure on the new Intel platform can make some nice numbers with these cheaper kits.
Last edited: May 17, 2021

just purchased a i7 11700k starting to think it was a bad idea after reading this thread.

Yep DDR5 is largely unavailable and priced through the roof. Plus DDR4 performs very close to DDR5 at this time.

The best way to get a DDR5/Z690 bundle is through the Newegg Shuffle.

Using 11700k in my main gaming system. Clear IPC increase over earlier, plus you don't have to worry about some 12th gen problems like needing to run Win11 for best performance and also some game DRM not liking the hybrid cores requiring workarounds.

i am still using that 9600k in my sig, after i read about the 12th gen i wasnt impressed. depending on how you look at it, to me its just a Arm Big Little setup. if im paying that much for a new 12th gen for a gaming cpu it better be all performance cores. the E cores imo should be be in lower in cpus, mobile setups/Aio pc's, etc. What i did pick up when newegg had posted some 11th gen markdown/sale. i debated my self on i5 11600k or i7 11700k, it was a 100 difference at the time. i got 2 more cores, though clock speed is slower on the 8 core. i figured without much work it should hit 4ghz without an issue. though i still at the moment regret not just getting the i5 11600k for it being near 4ghz stock. i figured go for the higher cores, for future games. that is even though my current gaming is not demanding enough for that cpu. i could keep using my current cpu and new cpu. my though was if im paying $300ish for a 9th cpu why not look at pricing for the new stuff. the ASRock Z590M PRO4 is/was $129+$349 for the cpu,they showed it marked down from $419 figured it was deal.. i havent kept track of cpu pricing when new ect so yea just felt like i got a deal. since i use Matx boards the only one for 12th gen even if i went that route was a near $200 asus board, more then i wanted to spend. i plan on the 11th gen slight upgrade to be for years to come, plus i get to a soldered cpu for much cooler temps lol. there it is for not going to a 12th gen for me anyway.

Picked up EK 240 AIO(temps looked great for price, didnt hurt newegg gave out a $20 GC for buying it), with a new case, using the same DDR4 (Patriot Viper Steel PVS416G440C9K) i bought in 2019 that was $160ish per 16gb kit, was the stuff to get then for ocing ram. now that leaves me with a 4th gen setup just needing a gpu/ssd drive and soon to be a 9th gen needing ram/gpu/ssd drive. i keep joining the NG raffle to hope to get a RTX3060 or 3060TI, even the 3060 would be a huge upgrade over my GTX 1060 6gb(want more fps for COD:vanguard). now just need to go read about which voltage options i may need to touch to get 4ghz stable. i would like to manually set the voltages so the board doesnt over-volt it making it run hotter then it should. here i go thinking i should have just gotten the i5 11600k since its near 4ghz away
You must log in or register to reply here.

FRONTPAGE Corsair Launches a200 and i200 Prebuilt Gaming PCs