I parted the heart of my Ryzen system a little over a year ago in order to get money for a down payment on a new place. For a while I was back to using my old trusty Asus P5Q-E. I grabbed a Core 2 Extreme off of ebay and on Cinebench R20 even got within spitting distance of a first gen i5 while using some 4 sticks of 2GB HyperX DDR2.

This last November I was finally able to build a machine again. I wanted a Ryzen 5000 series but Microcenter and Newegg had pretty much nothing on the AMD front aside from Ryzen 3000 parts. On the graphics front no one had anything in either the RTX 3000 or RX 6000 product series. I ended up going with:

Asus Maximus XII Hero Wifi
Intel i9-10900K (using a per core over clock up to 4 cores 5.3GHz to 8+ cores 5GHz @ 1.27v)
Asus Strix OC RX 5700XT (I verified right away that the heatsink is the revised variant that has the proper application of pressure for cooling)
Crucial Ballistix DDR4-3600
Corsair A500

I'm reusing the Thermaletake View 91 case and the Corsair AX1600i power supply. However I did strip out the four Thermaltake fans in the front and back and put in Corsair LL140 fans in the back and front and the one remaining on the top. For now I have the Corsair 120mm fans I previously had on the radiator from the Ryzen machine on the top and bottom of the case. Once I have the two loops I intend to have them out of the system and three more LL140 fans on the top.

My speed on the CPU is limited by heat. I can boot at 5.1GHz all cores but it is unstable at 1.27v. If I bump the voltage to 1.29v up the heat overwhelms the cooler and the processor thermal throttles. When I saw that I stopped pressing forward with the overclock for now to prevent damaging the processor. 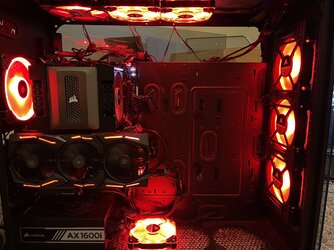 This is the latest test result I got this morning. I finally managed to get past 3200MHz on the RAM because I realized I had the RAM in slots A1 and B1 and they where supposed to be in slots A2 and B2. That has made a huge difference. This is as fast as 1.35v will take the RAM. I'm going to test and see if it will go any faster at 1.4v but I don't think I want to go any higher on the memory voltage. Anything more will be the frosting on top as the memory has already exceeded Crucial's advertised speed in both speed and latency. 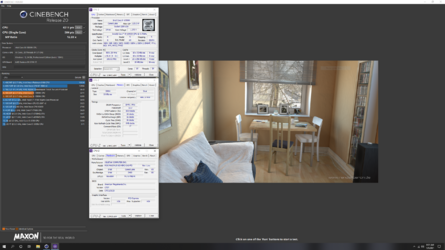 I validated the system with CPU-Z and the link is https://valid.x86.fr/ku96kc

I have some parts for a water cooling loop:

Next week when I get paid I intend to go to Microcenter to buy 6 fittings and the tubes to go along with them. I still have the kit from Thermaltake for bending 16mm OD tubes so that is what I plan to go with.

My intention is to eventually save up and get a RX 6900XT that can be water cooled. Maybe Power Color will make another one of those Liquid Devils. That is probably a ways off though. I'm playing around with the idea of getting the parts for a second loop and water cooling the graphics card I have because it will do 2200MHz on the GPU and a little over 1900MHz on the RAM but the heat in some games makes it unstable. It bounces on the 110C ceiling and then crashes. After I saw that three times I put it back on automatic so it stays under 80C underload. I figure water cooled I can put it back up to those settings without issue and then once I have the money for a RX 6900XT I can swap it and update the tubes and have it water cooled right away.
OP

I played around with some settings and managed to get a higher score in single and multicore. 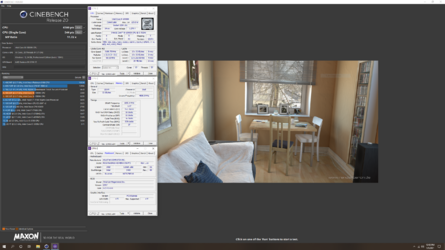