My subject is as the title says, overlocking an i5 2500k which has been used for 3 years on stock frequency. I've bought a new gpu gtx 970 msi 4g gaming one. Even tho most of the forums say my cpu on stock doesn't bottleneck my gpu, i wanted to OC it since i have been thinking about it for a while now. I have a zalman cnps11x cpu cooler which i changed the stock fan on it to zalman zm-df 12 and with a thermal paste ( thermaltake tg-4 applied just a little). I've done some stress tests on it with prime-95 for 20 minutes ( i know it is not enough to be sure about stability but it seems damn too long to me to wait for 8+ hours :< ) So i installed intel burn test which i applied on very high and maximum for 10 repetitions. The results are as following attachments, 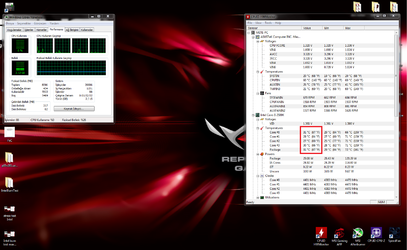 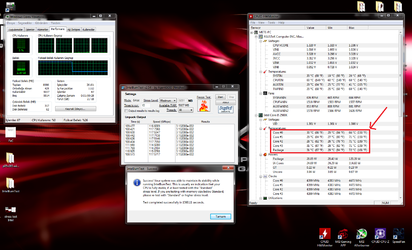 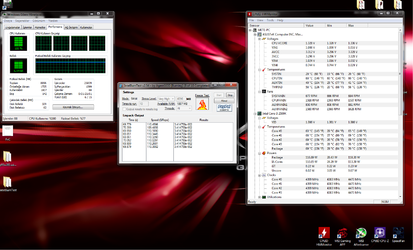 The temperature outside was around 13 degrees celcius when i've applied the test. And i've done the oc exactly as this site says ( http://rog.asus.com/76652012/overcl...k-with-maximus-iv-gene-z-to-an-easy-4-4ghz/3/ ). I left DRAM timing on auto since i have no clue about it and forum says i can so. And i didn't update bios really. I've read on a forum a few days ago that it's not needed.

Another thing is, when i tried to oc it to 4.4 with 1.250 V and stresstest it with prime95, it crashed on 3th or 4th minute. Then got in to bios again and saw that my cpu V was 1.300 V for a weird reason. So i thought it crashed with 1.300 V on prime 95 and upped it to 1.320 V. Then ran the intel burn test and it passed from both very high and maximum tests with 10 reps. But as i said, im not sure if this voltage is high for 4.4 ghz boost and wanted to ask u guys aswell. ( Thanks to Victorion as he helped me with it on tom's but you know i wanna ask more ppl for more information. ) Why im not sure about this voltage being high for a 4.4 ghz boost is as i said i applied 1.250 V as the rog forum guide said then it failed on P95 and when i went in to bios to up the voltage a bit more i saw it was on 1.300 V already. I really don't know why so i thought it ran and failed P95 with 1.3 V and upped to 1.320 V. This voltage and those temperatures are ok for this OC? Or are they too high and should i drop down the voltage a bit more? It seems stable so far (for 2 days ) on games etc.

Another question will my cpu last long with this oc and temperatures and should i keep my cpu cooler fan speed on 1600 and frequency on 4.4 ghz all times? ( It has got a button on it which u click and it boosts to 1200rpm and 1600rpm so it's running on 1600 all time as i set it to 1600 rpm. Or shall i activate speed step and auto fan control from bios ? ( Again Victorion named dude on Tom's told me i should. I wanted to ask u too. ) How would u find this cpu cooler compared to CM hyper 212 EVO? EVO is better or they're kinda same?

What i do on pc is playing wow, bf4, warhammer end times etc. And using solidworks from time to time. That's all really.

Murind welcome to the forum, sorry for the lack of responses but the forum is usually a little quiet on the weekends. Now on the 2500k Oc, it's great little chip and still viable performance wise albeit a little bit slower then the newest and greatest. I have had one Oced to 4.5 on a CM 212+ since 2011. If I recall correctly I need 1.35 V to run 4.5 stable on my 212 with 22c ambient temps and my Core temps are in the high 80's running Prime Blend. I have not seen any degradation on my chip running at that clock speed and voltage, it's been running that way 5 days a week approximately 8-10 hours a day like that.

As far as your settings every chip is different, so the only way to know what voltage your chip will need for X oc is by playing with it. I do suggest running at least 2 hours of Prime blend to confirm stability, 8+ hours is a bit excessive. As long as your temps are not excessive you do not need to have the Cpu fan running at 100% all the time. Just set the fan curve to ramp it up when the temps increase. If you could also post screen shots of the following tabs in Cpu-Z it will help us see under the hood a bit more, Cpu, Spd and Memory.
OP
M

Mandrake thanks for the response mate! I understand forum being quit silent for weekends i just panicked when i saw 26 views and 0 response u know

If we return to the subject, i'm adding some screenshots related to cpu,spd and memory on cpu-z and some more for bios options. Can you please check them when u got spare time and tell me if i have any setting wrong pls mate?
This one is the CPU-Z settings, 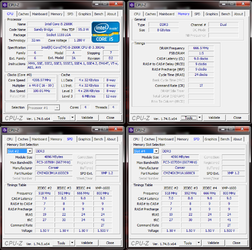 This one's BIOS settings, ( Please inform me if i have any option that'S not meant to be on auto or any mistakes. ) 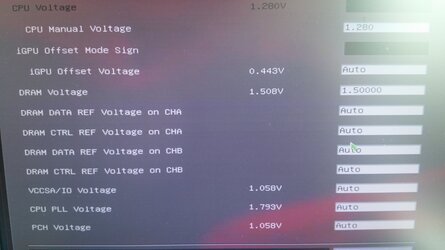 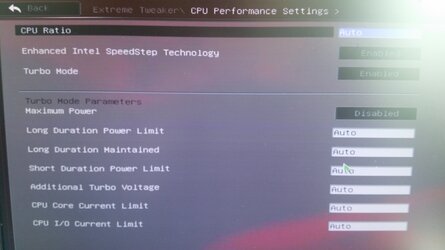 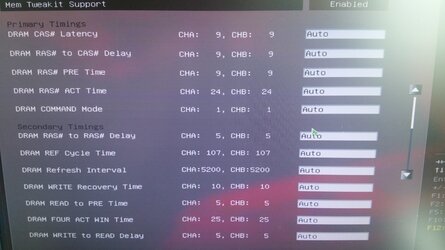 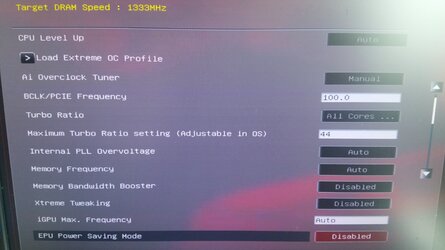 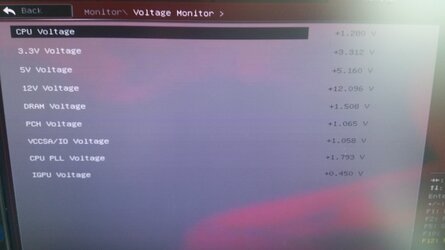 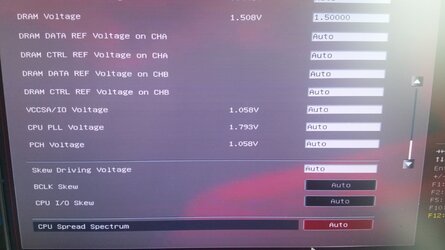 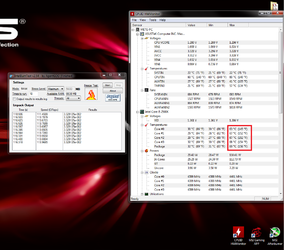 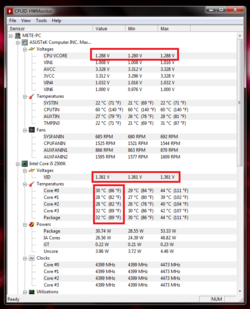 Thanks for sharing your time again. Have a nice day !

Gah. The order of the photos ain't as i set them up. Sorry for the confusion:/

Ok one thing I noticed is you Dram is rated at 1600 Mhz and you're running at 1333, so go in and set the XMP 1600 profile. If you don't have this option then well just do it manually. Then post another screen shot of Cpu-Z, Memory and Spd tabs so I can see if the ram timings are set correctly.

A few notes, idle temps are irrelevent unless you're seeing extremely high temps that indicate an issue, which you are not. Most processors I've seen, do not have accurate temperature readings at idle, lets concern ourselves with load temps, which at high 60c you're fine.

Cpu VID is usually the voltage the processor needs at stock settings to run correctly. Now is that voltage reading in Hwmonitor accurate I have no idea and I feel you shouldn't concern yourself with it. The Cpu V core is what we should be concerned with, yours looks good. You're not getting any voltage droop under load and the Cpu LLC is only boosting it to 1.296 under load.

What I would do here is change the Dram frequency to 1600 Mhz and get it stable at 4.4 Ghz. If you can pass 2 hours prime blend and want more you have plenty of temperature headroom to try for 4.5-4.6 Ghz if you want. You may also want to read the guide in our forum.
OP
M

Hey again mate! Sorry for the late responses. I'm kinda ill had to seem to a doc :/ Thanks again for info. Gonna try to up it to 4.6 soon if i got the headroom for it that's good news For the memory frequency i upped it to 1600 mhz as shown in photo. Only changed the frequency. Didn't change any voltage values related to memory. Just the frequency from that tab u can see in bios photo. Couldn't see XMP profile but i hope that's the same thing with it. Btw i applied a 3 hours prime 95 test before upping the memory frequency to 1600 mhz and the max temp on it was 64 degrees celcius. Shall i run it again after changing the memory frequency or i'll be fine ?

Here is the bios ss that shows how i did it and the new cpu-z ss, 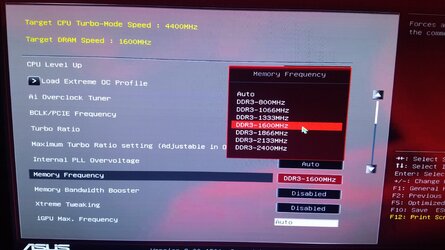 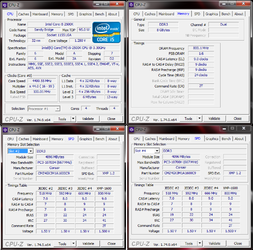 Thanks for sharing your time again mate. Have a nice evening!

Ok if you look at the memory tab in Cpu-Z your timings match the timings the sticks are rated for in the XMP 1600 profile in the Spd tab so you're good to go. The rated voltage at 1600 Mhz is 1.5 Dram V so you do not need to change it.

The 2500k shouldn't have any issues running 1600 mhz vs 1333 Mhz so I don;t feel running prime blend because you upped the memory is necessary. If when you try for 4.6 you're having a difficult time finding stability, them maybe you will need to do so in order to rule out the Dram causing the instability. Again, I feel this will be a non issue so push on. Raise the multiplier to 45 test with prime for 20 minutes, for tentative stability if you pass raise to 4.6 and then try to get it to pass 2 hours blend, add voltage when you have a failure. If you start getting in the upper 90's during prime you may have hit your heatwall, if you pass 2 hours and are below 90c during prime you're good to go. For a daily oc on a Sandy bridge to be safe you'll probably want to stay below 1.4v.
W

4.4GHz looks good you should be able to run up to 4.5GHz with sandy bridge.
OP
M

Allright! Awesome news guys. Thanks for sharing your time and all the feedback mandrake ure n1 mate! I'll post here after tryn to hit 4.6 ghz this week when i got the time to do it. Time to test it with some BF4 then ! Have an awesome evening my friends!

Murind said:
Allright! Awesome news guys. Thanks for sharing your time and all the feedback mandrake ure n1 mate! I'll post here after tryn to hit 4.6 ghz this week when i got the time to do it. Time to test it with some BF4 then ! Have an awesome evening my friends!
Click to expand...

Thanks, just passing on the knowledge I have from my experience here. If you really want to learn how to Oc you've come to the right place.

i've been running my 2500k at 4.5ghz 1.368v (it required a lot more voltage once i went over 4.4 for some reason) for over 3 years now. performs the same way it did when it was new.
You must log in or register to reply here.