PWM control for some medium/high powered Delta fans, worth it over undervolting?

Sorry if I kinda hijacked your thread earlier. Post some more pics of your setup when you get time. Sounds like a cooling monster.

I personally like to tie my radiator fans to water temperature, and the case exhausts to the VRM temp.
OP

Voodoo Rufus said:
Sorry if I kinda hijacked your thread earlier. Post some more pics of your setup when you get time. Sounds like a cooling monster.

I personally like to tie my radiator fans to water temperature, and the case exhausts to the VRM temp.
Click to expand...

Are you kidding? These threads are boring without hijacking. Let my thread be the premier channel for discourse, I say, rather than a stagnant jack-off session for yours truly.

Edit: My favorite threadjackings were when giant debates were spawned between c6 and everyone else. From time to time someone would say something like "this thread is about the OP's topic" and then I would say "NO! THIS IS AWESOME"

Radiator fans to water temperature seems like the most accurate policy at least when it comes to cooling the radiator itself. How do you jack in a sensor reading for that?

I have found indeed that the rear exhaust by the CPU socket is the biggest expulsor of VRM heat. If they get really extreme the top rear fan also contributes somewhat. If there was 1 final frontier candidate for spot cooling in this case, it would be a directional fan, preferably 80-92mm blowing directly at the VRM area, probably hanging around the middle of the big open area of the upper half of the case. I reckon that could reduce VRM temps by at least 10-15 degrees because they're receiving zero direct turbulence since the RAM is blocking the wonderful airflow from the intake radiator pull fans.
OP

This is interesting because it covers both the topic in this thread, which is speed controlling medium high powered Delta fans, and the topic in the other thread I made, which is caseflow with respect to helping cool down the GPU. But it seems this thread has been far more popular/successful, so much like YouTubers try to extract even more out of their best performing videos by placing them on autoplay on their profile, I will needlessly pump an already very pumped threat of mine by placing this update here.

A rather lengthy one but you know there has to be a lot of details to discuss if it takes someone an hour to describe it. Or at least, you had better hope.

Ok, got my CoolerGuys fans in. Yeah.....I kinda knew this going in, but these are not for daily driving for a quiet rig. Benchmarking, sure.

They will start at 5V but have the reported motor surge. Once you get to 6V the RPM's ramp up and they run smooth. And boy do they move air even at 6V, and not quietly, either. They push enough air through my GTX280 to get that radiator easily to max performance. At 12V, they're just mad fans!

Max0r said:
Radiator fans to water temperature seems like the most accurate policy at least when it comes to cooling the radiator itself. How do you jack in a sensor reading for that?
Click to expand...

Whoah those inline things are pretty amazing of an idea. How does it interface with the control software? Or.... hardware? Is it a standard thing or specific to a certain piece of software or hardware?

I gotta say, that fan you tested really has poor undervolting capabilities compared to all the Deltas I'm messing with. And for the size and power, I tend to believe a Delta could easily be undervolted to a nice soothing, non-harsh sound. Even the 80x38mm screamer rated for 0.87A is pretty good for undervolting. I'm convinced if its bearings were in better condition it would be much better than it is.

Very similar specs actually when you consider the size difference. In fact the CFM is about identical when factoring in total unit volume. Similar noise etc. But the Coolerguys one is waterproof!??!?!?! 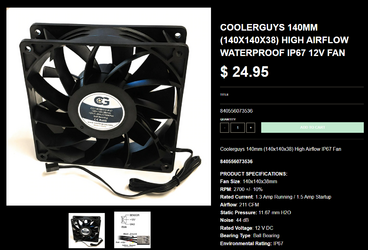 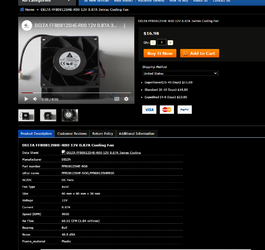 Supposedly it is, but I'm not going to test its water resistance.

It wouldn't surprise me if the CoolerGuys fan is the same as the GDSTime or Wathai fans.

For the temp sensor, it requires a motherboard with an external header for a temp input, otherwise you'd be tying the fan speed to some other motherboard mounted sensor. One of the really cool things about modern motherboards, making external fan controllers essentially obsolete.
You must log in or register to reply here.