My 9900K cost ~£500 inc 23% tax. It was for about £690 2 weeks ago. So now is not much above MSRP (counting local prices, taxes etc). 9700K in Poland costs about ~£450, 8086K maybe ~£10 less. Considering that price went down to about minimum possible and we can expect shortage in next weeks/months then I thought it will be a good idea to buy it now. Probably as most my ideas regarding hardware like this, it was stupid anyway
I have 9700K ES but soon I will have to send it back. It's below average chip with really bad IMC. The only benchmark where I see better scores comparing to my 8086K is XTU but it's pumped by marketing and every higher generation chip has much more points.

Maybe I will bench something during weekend. No idea how much time I will have, at least mobo is ready 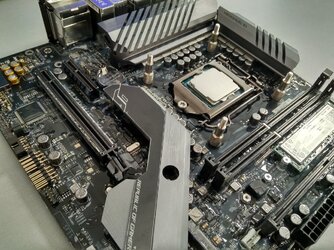 Ok, you saw bigger drop as your 9900k pricing started higher than here in the first place. Retail pricing at the places I shop at never went above £600.

9700k might do better in XTU over 6 cores purely from cores. I believe the bench in XTU is FPU heavy, so not something that gains much from HT - but I never checked if that was the case for XTU.

I edited into last post but will write again, just ordered a 5930k as the used pricing was pretty good. The extra lanes wont help with single GPU, but might help if I go SLI/Crossfire again in future. 8 cores are still more than I'd want to pay.

Suppose I shouldn't be surprised that Broadwell-E doesn't clock well, given the desktop versions didn't either. I guess my plan now is, this weekend I'll move the 2080 into the 5820k system and start benching again with that. I'll swap in the 5930k when that arrives but probably wont be until next week. I found my notes and confirmed I only got to 4.5 GHz on my 5820k.
W

Now when I started to check my results, I see that my 5820K result disappeared from the database or was deleted ... and I had a lot of points for that beating guys on top chips and LN2
OP

There was a noticeable bump in FP performance going from Haswell to Skylake. I saw a consistent 14% improvement in Prime95 like tasks when not limited by ram bandwidth, after normalisation for cores/clocks. I haven't seen any difference between the -lakes though.
W

Mentioned difference in scores was since XTU was released. It's more like a marketing tool to show that new generation is so much faster when in real it's not. On the other hand it's easy to gather points on hwbot.

Btw. I fixed that submission. Some database error and I entered it via my XTU profiles tab / manual recalculation. It wasn't visible anywhere. Actually I had maybe 20x 5820k XTU scores which were not visible.
OP

You kinda make me want to see if I can figure out how XTU scores scale now... and score some hwbot points along the way! I wont have the time or motivation to see if old versions give different scores to more recent ones, but can at least run current on variety of hardware Haswell or newer. Don't really have anything older worth running although I might have some subs already in there.
OP

Moved the 2070 into my 5820k system, and started to re-apply the CPU OC. I think CPU cooling is a problem, as I am running a cheap CoolerMaster 240mm AIO. At 1.3v, previously required to be pseudo-stable at 4.5 GHz, I'm getting temps into high 70's running Cinebench, and it isn't 100% stable. Maybe the spare Noctua D14 would be better? Pulled out the AIO, went to fit the Noctua before realising it doesn't come with 2011 mount. Doh! Should have checked first. Unless I want to pay as much on shipping as the kit, it's going to take about a week to get the mount kit, so AIO went back on. I wonder what cooler I have on my other 2011 system, maybe I can steal that...

So now I'm debating if it is worth running it at all for GPU benching. I can pray to the stability gods and try at 4.5, or back off a bit to 4.375.

I got email from stability gods, they said stick to lower oc.
OP

I got some runs in. I found another problem I encountered in the past but forgot about... the system just isn't stable (regardless of CPU clock) when the bus is not at 100, sometimes not even booting at all. So I couldn't run the ram at 3000 after all and had to drop to 2666, but CPU at 4.5 was still unstable and I had to run at 4.4. I was also going to swap the 240mm AIO with a Noctua D14, but found out the D14 doesn't come with 2011 mount. Doh! Then after mentioning it elsewhere, it was pointed out the D15 (which I used on 115x) does come with the 2011 mount, so I'm just about to install that and see if it gets me more thermal headroom. Seriously, the 240mm AIO is a bit rubbish.
S

How is your GPU working so far?


mackerel said:
I got the card in subject as it was one of the low cost Turing cards, available for the same price as a low end 1080. This was £460 with tax, equivalent to $500 without although price conversions don't always work that simply.

I've run some 3DMark family benches on it, with a 6700k at 4.7 GHz so I'm never going to get the highest CPU score. Of course, I also had to overclock it.

Next was mem. I thought this would take forever with FireStrike, so instead I used Heaven. I went up... and up... and up... +925 was the highest I saw that didn't crash, next step to 1000 immediately crashed. I was kinda hoping for some artefacts to tell me to back off. I rounded down to 800, and grabbed a FireStrike run for hwbot.

Ok, FireStrike Ultra next. Blank screen crash. Ok... what is wrong? Dropped mem to +600, still no go. Locked up loading this time. Dropped core to +75, got a run in. Too lazy to put ram back up for rerun so left it for the sub. Repeat on FireStrike Extreme with increased ram again. As I was using my Win7 bench install, no Time Spy for now.

Since I had bought it previously, I did a quick 3DMark11 Performance run too. With that I decided it was bed time and will do VRMark tomorrow.

I did some tests with FAHBench too (default settings).

So... it is a good amount over a 1070, and getting close to a 1080Ti. Not bad... I also need to grab power measurements to work out efficiency compared to other cards. For reasons I don't understand yet, reducing power limit actually increased power usage and performance in FAHBench.

The overclock scanner in Gigabyte's software crashed and I didn't bother looking at it again.

Temps were fine throughout the FireStrike and FAHBench testing, going into the 60's. Don't think that's a limiting factor. I didn't monitor it during the other benches.
Click to expand...

Hey, wanted to ask you how's your GIGABYTE RTX 2070 WINDFORCE working so far? As I've read all over the internet that these cards are dying. let me know as I've bought one too. Thanks
W

Not so many reports recently. I guess that those who had bad luck made a lot of noise just after premiere.
My friend has RTX2070 Gaming OC and it works fine since he got it. I got Gigabyte RTX2060 for my test rig and it works fine too. Actually RTX2060, 2070 and 2080 from Gigabyte share the same PCB. Different are some elements, amount of power phases etc.
You must log in or register to reply here.