Long time no see. Guess I've been working way too hard and lost track of the years...

I recently realized that my rig is nearing the 4 year mark and just not playing the latest games as smoothly as it used to. Not having the money for a full rebuild right now, I decided my best bet was to grab a 5770 since they are so cheap, cool, quiet and fast to replace my X1800XT 512MB.

I ran the full 3DMark06 suite with each test looping 3 times on my old card just before swapping and on my new card after installing the latest drivers and making sure everything was kosher. I ran both after a fresh boot with all my usual background apps shut down.

Unfortunately, the performance of the new card is very disappointing. I realize that my older CPU and RAM is holding me back somewhat, so that's why I ran the full suite and setup a spreadsheet to compare the results, so I could focus on the GPU tests. However, looking at the comparison (and looking at all the 5770 results in ORB) I'm starting to think maybe there is something wrong. In one test, the 5770 actually scored lower than the x1800!

I was running an old version of Catalyst from Feb of this year before putting in the new card and updating, so I'm wondering if maybe something from the old drivers is lingering. I'm going to do a full driver cleanup in safe mode and try reinstalling the latest catalyst, but in case that doesn't work, I'm looking for other ideas of things to try. I've already been through the BIOS and didn't see any PCI-E related stuff that could be the culprit. I also ran CPU-z and GPU-z to make sure that the PCI-E slot was running at full x16 speed and everything there looks correct as well.


Here are some of the results:

CPU is likely holding a lot of that cards potential back... have you overclocked the CPU for this tesT?
OP

EarthDog said:
CPU is likely holding a lot of that cards potential back... have you overclocked the CPU for this tesT?
Click to expand...

I'm sure you are right that my CPU is holding me back quite a bit. I expected it would, I guess I just hoped that I'd still get a significant boost until I can do a whole new build. That's why seeing less than 2x improvement came as a bit of a shock.

As for the CPU, I'm running it at stock right now. I'll up it a bit and see how that changes things. Thanks for the input.

What resolution do you play games at? The higher the better as it will take the load off the CPU and put it on the GPU

3DMark06 (default settings) is just a CPU tester these days. Try running it again at 1920x1200 or higher and see what happens.

it might also be that for that test your card is throttling back to 2d clocks would have 2 a major guess of mine also, even more so if the cpu speed was the same vs the 2 cards

Yo you should really clock that little baby! The Opteron 165 can easily do 2.7-3.0 depending on stepping and cooling. Mine can do 2.9 but i'm not really comfortable with the cooling, already running at 55-60 degrees.

Im getting my 5770 tommorrow (yes it's in my signature, i just couldn't refuse shining a little) but i'll post you my results in 3dMark06 tommorrow or in the weekend. My Opteron and ram will probably also be a tiny bottleneck but hopefully it wont be such a problem cause right now i own a 1900xt and i play all the games without real problems(Except RE5, though i think it was a driver issue).
But if i'm not mistaking the 165 runs at 1.8 stock? and that is really slow. I got a HUGE boost overclocking mine.

Well i got my ATI 5770 earlier today, unpacked it and was first quite surprised at the size, I thought it would be bigger. The second thing that startled me was the fan, I didn't get the usual batmobile fan, I got a "normal " fan. Looks like this. 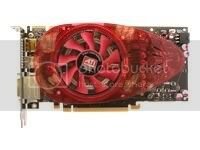 Also really suprised at it's noise. It doesn't make any sound at all, just as silent as my former zalman for my 1900xt, even on max load. Also runs cooler than my 1900xt with zalman, that one ran at 44-47 degrees in idle, this one runs at 39 degrees in idle after a cuple of hours gaming.

Now when i was testing some games I saw a tremendous performance increase in some games(especially Resident Evil 5 DX10, runs at an average of 47fps, it was painfully unplayable at DX9 on the 1900xt), a little less in some other games, then again, it's not a monster card, and it performed as i expected, especially considering the price. The only game that i didn't get satisfactory results with was GTA4 but the again, does anybody really I guess it's both cpu dependent and badly coded and buggy.
Also i know my cpu and ram is bottlenecking a little, but i'll upgrade next year anyway.

Tried some 3Dmark06 but as you say it mostly stresses the cpu and that was quite noticable.

All tests was done with Windows 7 and only 2GB ram, i'll get 2GB more on monday or tuesday, guess I'll get a little better results then.
Think I'll also try to overclock it a little and see if I'll get any better results or if it' totally bottlenecked. Got some zalman memory heatsinks that i can put on the memory.

It's just one thing I'm quite confused with:
How the heck am I going to get s-video and coaxial(video) output on this? Didn't get any cables for that, is it even possible?
L

To add my 5 cents, i got my 5770 this week and it's running quite good on my machine.....my rig is about 3 years old now, but with an overclocked quad, it runs just fine.......adding the 5770, i overclocked the clock and the memory just a bit and it runs stable (will push it some more this week) - have downloaded and played "Dirt 2" and it looks amazing compared to what i had been using (Nvidia 8500 GT - i don't game much)....i haven't looked at my Blu ray yet, am waiting for my new copy of Planet Earth to come in but i can't imagine it being anything other than gorgeous........#s from a few benchmarks are way better than anything i've previously owned but remember, the 5770 wasn't supposed to be a 4870 killer - its a replacement with Directx 11, Eyefinity, and a few other toys so don't expect monstrous #s, the 5870/5970 are supposed to do that.......i'm fairly pleased with what i've seen from mine (Sapphire 5770) to the point i've even downloaded some demo's to play and checked out the free version of 3dmark06 - it runs fairly smooth, but without the full version, repeating #s here are of little use since it doesn't include everything........ and it is fairly quiet - what a surprise considering how big the fan is........
You must log in or register to reply here.