We are still giving NVIDIA notice that we are a force of good that should not be reckoned with. If you have been following the thread on NVIDIA rumors ad discussion here: https://www.overclockers.com/forums...mpere-(3000-series)-GPU-Rumors-and-Discussion My newest theory for the lack of availability is that the NVIDIA team is trying to maintain their dominance in the [email protected] realm. I have to say this strategy is working. Maybe? What’s your thoughts?

Some teams are making great progress against us and other are struggling a bit more. As our members begin to receive their new cards, we will again show our dominance over our folding friends. That is… if we can crack the NVIDIA folding conspiracy.

Active folders and ranking:
We’re down 3 more active folders guys. It’s OK that you drop in and drop out but at least stay vocal and let us know that you are doing well. You don’t have to be an active folder to stay involved. Trolls are not welcome but lurkers are. Come in, post an observation, cheer someone on and have some fun. Fold when and what you can and all is good.

Summer is coming so start making plans to shut down and clean machines so that come next fall we can hit our competitive friends from the other teams. Don’t shut down yet. Keep folding as long as you can. I’m just saying that this is a good time to make the plan for when you do have to reduce production due to summer heat. Pidder padder. (Guess which show I’m binging now?)

Milestones are earned at all levels. Congratulations to you. You earned it.

World Top 200:
Times are especially tough on these guys since Stanford started including COVID into the mix. Cheers guys.

If you’re not having fun, you’re doing it wrong.
It’s not how much you fold but if you fold.
If you fold, then you’re my friend.
Keep your stick on the ice.
A journey of a thousand miles begins with the first step.
Everything is within walking distance…. if you have the time.
SEND IT!
The early bird gets the worm, but the second mouse gets the cheese.
Where ever we go that's where we will be.
“Make the noise!”
Pitter patter.

Sailing season always interrupts plans, eh? Folding machine went offline 'cause I wasn't monitoring it, so I finally rearranged things to have the spare 1080ti in there. Its not going back in the rack though... I might have to buy one of those mining chassis. 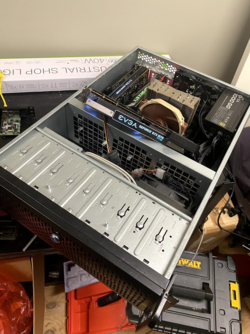 Let's hear it for the (billionaire) boys.