Jasonaaronfox said:
I was. Hooah. Medical retirement after a short stint. You?
Click to expand...

No military experience. I'm retired from ministry. The last 20 years of that as a hospital chaplain in the place listed below my avatar. I took Horace Greeley's advice: "Go west young man" and left Virginia in 1976. Since then I have lived in several places in the Rocky Mountain west and the Pacific NW.
OP

trents said:
No military experience. I'm retired from ministry. The last 20 years of that as a hospital chaplain in the place listed below my avatar. I took Horace Greeley's advice: "Go west young man" and left Virginia in 1976. Since then I have lived in several places in the Rocky Mountain west and the Pacific NW.
Click to expand...

How ironic. I attend seminary in September.

I'm sending you a PM as we are getting off topic.
OP

trents said:
I'm sending you a PM as we are getting off topic.
Click to expand...

This winter storm has severely interrupted the arrival of parts for my project. I still haven't received the kraken or the auxiliary fans. I did get the heatsinks in. I did manage to snag some Corsair Vengeance ddr3 2400mhz for a good price, so memory upgrade is occurring as well.

I may end up running two San Ace fans in this system, one on each radiator, both blowing out of the case to avoid heat building up.

I have been tossing around the idea for a few years now of remaking the PIC controller I designed and utilizing a USB Motherboard header connector without physical controls, then writing a piece of software for controlling the fans from inside Windows. That would allow me to control 2-8 fans from inside the PC with each fan having independent power, independent PWM control, monitoring, and possibly adding temperature sensors.

I opened up the case today and disassembled everything for cleaning.

I apparrantly have a dust problem. Thank God my fan is a San Ace. I’m leaning toward the custom filter kit from demcfilter.com.
Last edited: Feb 2, 2019
OP

You’d think with that fan and a Corsair H60 I wouldn’t have a temp problem. I’m topping out at 4.4ghz on the 2500k no matter what voltage I throw at it and even with the San ace at 25% I hit 80C on intelburntest. Maybe time for new thermal paste? What do you think?
Last edited: Feb 3, 2019

How old is the H60? Believe it or not, over time the water evaporates from the hoses and AIO coolers become less and less effective. You might also consider a push/pull fan setup if there is room.

No suggestions. Been too long since I overclocked that gen Intel. Looks good to me. The vcore is still in the quite safe range.
OP

This is what comes in the Kraken kit. I ended up not using the white shroud because my video card was too short. 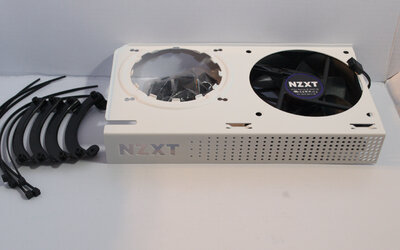 Here is the ugly duckling. 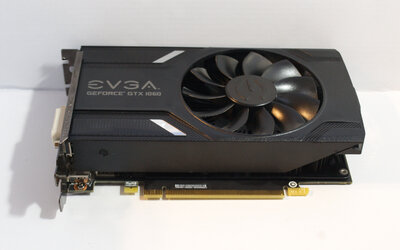 Mounting the brackets was fairly straightforward, but I had to break tips off the vram heatsinks I bought to get them to fit under the brackets. I'm not entirely sure if they are going to stick either. I may take it all apart and use a different adhesive than what they came with. How essential are the heatsinks if I have a large airflow directly blasting at the card? I've aimed two 12v san ace 60mm fans straight at it and undervolted them to 5v to control speed/noise. 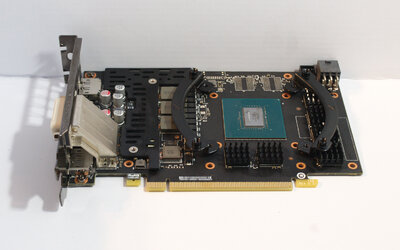 I ended up taking the Intel mounting bracket from the H55 and filing the holes out to fit the different offset of the Kraken. It made for a cleaner install. 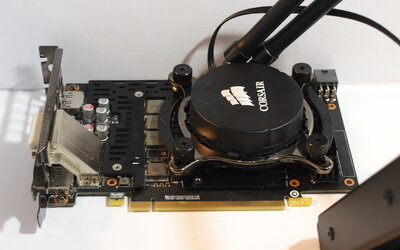 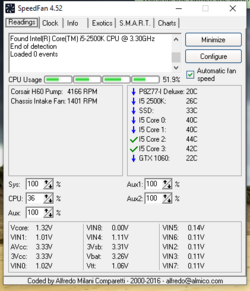 Finally, I haven't gotten the case back together yet. Need to mod it with a new fan hole. Excuse the rats nest! 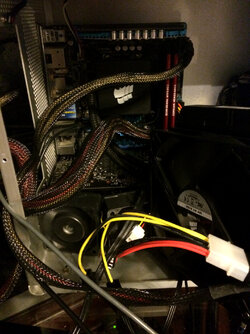 I'm a little nervious about the VRAM heatsinks. They were NOT sticking well. They are held in place paritally by the bracket, but they have a little wiggle if they come loose. They won't go anywhere, but they would lose contact.

I had to cut up and use pieces of the original plate with thermal pads that acted as heat sink before on this card. So far, blaring two fans directly at the board is taking care of all temperature related problems I can see. What worries me is there is no temp sensor for vram.

Anyone who knows more about the 1060 architecture who can chime in as to the necessity of heatsinks on the vram if I'm already blowing air straight at them, I would appreciate it.

Whether or not the vram heatsinks are necessary with direct air blowing on them I can't say but surely, how much the vram is overclocked would have a bearing on that.
OP

Best I can tell, evga overclocked the vram 1ghz from 7ghz to 8ghz. So... maybe not too crazy.

Nice setup with the water block/pump and bracket on the GPU. Nice work!
OP

trents said:
Nice setup with the water block/pump and bracket on the GPU. Nice work!
Click to expand...

Thanks. Stays chilly for a mini-itx. I wish I had a dedicated water cooling setup with all those fancy lights and stuff, but I'm on a budget.

Next step is waiting for a pwm signal generator to arrive. I found an IC on ebay cheaper than what I can build and program myself that I'm going to use to control two more san ace 120 fans that I'm adding to the case. One blowing in and one blowing out (the new h55 radiator.) Should be able to set the fan to 10-12% (1250 rpm) and keep the video card chilly without ever having to adjust it. I hardly ever adjust the one of the cpu unless I'm doing a burn test, then I set it to 25% hahahaha.

I'm hopefully meeting up with the owner of a machine shop Wednesday to cut the hole for the fan. Ends up I can get it done by a professional cheaper than I can buy the hole saw.
Last edited: Feb 5, 2019
OP

Alright. Removed those heat sinks that were falling off. Worthless amazon garbage. I managed to cut up and reuse the section of heat sink from the original plate and put it back on, and it fit snugly under the Kraken / H55 mount.

So far, temps are good. Did 10 minutes of Skyrim at 2560x1080 with SMIM and an alternative textures pack, and an ENB. Topped out at 34C under load. Temp at idle 22-23C stable. Not having a hot video card in the case has also helped my CPU temps a LOT. Hopefully I get five more years out of this PC before replacing.
Last edited: Feb 5, 2019
OP

Began bench testing my new fans. So far so good with a square wave generator I found on ebay to control the other two 120mm fans. The 80mm fans are not PWM unfortunitelly.

I have the same card. You could simply set fan to ~35% in EVGA software and it would keep temps at safe max and would be quiet without significant throttling. I have no idea why but EVGA failed fan profile. Standard settings make it run at 100% fan speed in any more demanding 3D.
It's maybe an info to users who don't have space for additional cooling as you already installed AIO.

Heatsinks are useless on these cards, regardless if memory is overclocked or not.
OP

I have a real aversion to fan noise. The stock cooling was so noisy. Very irritating.

Good to know about the heat sinks. I ended up cutting up and reusing pieces of the stock plate and aiming those two little 60mm fans at them to be safe. Not having a temperature monitor for vram had me nervous. I have not tried OC’ing the memory yet, but I bumped the gpu up with no problems. Any suggestions for overclocking it safely?
Last edited: Feb 11, 2019
OP 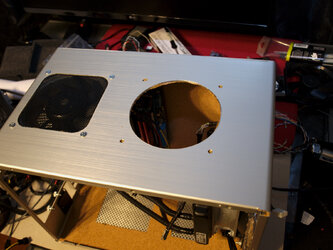 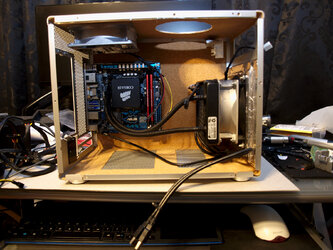 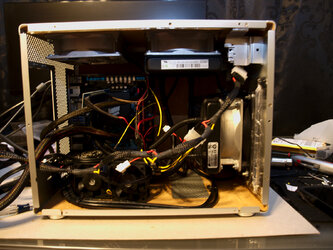 I got the new fan hole cut, many thanks to those who helped me with advice in another thread about cutting aluminum. Put in the three 120mm san ace fans and at least the two small 60mm fans for now to ensure the vram never overheats.

Tomorrow's project is to shorten the PSU cables and do some cable management. I'm still waiting on a housing for the pwm generator I got off ebay as a temp solution to run the other two fans. I will be trying to make a new multichannel pwm controller soon with software reporting so I can monitor and control the fans from the OS.

I added cork shelf liner to parts of the case for aesthetic reasons, and also to help absorb some of the mechanical vibration from the fans. It helped a LOT.

GPU runs a little warmer on the San Aces, but so far so good. Core temps on CPU under 60C in Skyrim, GPU under 42C. Fans set to 1250 RPM, ~10% PWM duty cycle @ 16000htz. Left top fan is intake to help balance the added fan for the GPU, both fans with radiators are set to exhaust.

I managed to get one of the excessively long lines from the power supply shortened before my hands needed a break. Taking those pins out just using construction staples almost makes it worth buying the correct tool for the job. The ratcheting crimper I found on amazon was cheap ($9,) and worked wonders on the molex connections. Word of warning, don't order your molex fittings from Sager electronics. They will charge you an eyeball for shipping because apparently they are too stupid to realize they could put 50 molex pins in an envelope and not a large box full of packing peanuts.

I also had great luck with Demcifilter. They made a filter kit for the Lian li q08 case and offered brushed aluminum. I need to countersink the screw holes on top of the case so the filters will rest flat, but that's a project for another day. For now, it's up and running again!

I'm also waiting on a mini pci-e to pci-e adapter and an older Creative Labs Sound Blaster X-FI card to see if I can't get some decent headphone amplification without buying a full DAC. The P8Z77-I motherboard had a mini pci-e slot, so here is hoping it will work. Worth a shot, didn't cost much for either item. 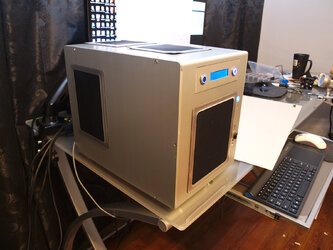 For some reason I was getting some pretty serious turbulence in the front facing fan. I broke apart an old 120mm case fan and converted it into a shroud spacer between the radiator and the front fan. Problem solved.
Last edited: Feb 15, 2019
You must log in or register to reply here.

Upgrade or replace my htpc to use my rift-S