In this article, we examine the impact of the L2 cache size on CPU performance by comparing benchmarks of a PIII 1200 MHz with a PIII-S 1266 MHz. We find that a larger L2 cache gives real performance gains and attempt to quantify those gains.

In modern processors, we see that there are varying sizes of L2 cache on the processors. For example, Celerons have 128KB of L2 cache, the newer Celeron II’s (Tualatin) have 256KB, PIII (Coppermines and Tualatins) and Athlons have 256KB, PIII-S chips have 512 MB, Xeons can have 1MB or more, and P4’s have either 256KB or 512KB.

When comparing processors, it is important to note that the size of the L2 cache can have a great impact on that comparison. It is generally regarded that a larger L2 cache will give greater performance, but direct benchmark comparisons which attempt to isolate the effect of the L2 cache are hard to come by.

Recently, I replaced my PIII 1200 MHz (256KB L2) with a PIII-S 1266 (512KB) cache, giving me the opportunity to run these benchmarks on identical hardware with identical software and driver settings. This allowed me to isolate as well as possible the effects of the L2 cache size on CPU performance.

History: Just what is the L2 Cache?

It is natural at this point to wonder just what the L2 cache is and what it does. (It’s also natural to wonder if there is an L1 cache.)

Modern processors have two levels of cache: L1 and L2.

The L1 cache is a small amount of memory, generally 32KB to 128KB, that runs at the same speed as the processor and stores instructions and data to feed to the CPU core. It sits directly on the CPU die itself. It is the task of the L1 cache to be able to send new instructions to the core as quickly as the core can take them, for otherwise, the core will sit idle and under utilized.

To assist the L1 cache, most modern processors have another, larger layer of cache: L2.

This layer of memory will generally run faster than system memory and can be accessed directly by the CPU / core. The L2 cache will not only act as a buffer for incoming instructions and data, but will also store recent instructions and data and try to anticipate what will be done next. When successful, this anticipation can feed instructions to the CPU even faster and thereby increase its utilization.

On a Pentium III, this predictive cache is called ATC: Advanced Transfer Cache. Clearly, when the L2 cache works at its best, the CPU can be more effectively used. And even when it isn’t at its best, having more L2 cache allows more instructions and data to be retained and increases the probability that the cache’s anticipation will be correct.

Traditionally, the L2 cache was located on the motherboard. At that time, the L2 cache was still much faster than the system memory, but it was hamstrung by the fact that it was so far from the CPU core and L1 cache. With the early PIII’s, Intel moved the L2 cache (512KB at that point) from the motherboard to the SECC module (processor packaging) and ran it at half the processor speed. This was a great improvement for CPU performance, but as clock speeds increased, it was once again a bottleneck.

At this point, the reader may wonder just why the cache is smaller as it gets closer to the CPU core, just where it is needed the most. In short, manufacturing memory on the CPU die itself is very expensive, and space is limited. This puts a constraint (in terms of price and available real estate) on the L1 and L2 cache sizes.

One last note: With the recent die shrinks from the 0.18 micron process to the 0.13 micron process, Intel has gained room on the CPU die for a larger cache. This is why we’ve begun to see 512KB L2 caches on Northwood P4’s and PIII-S chips. AMD also has larger L2 cache sizes on its roadmaps.

Okay, with a brief description of the L1 and L2 caches and what they do for performance, we can turn to our first benchmark: Matlab. (Edit: I couldn’t afford to keep an idle PIII 1200 any longer, and so I was unable to run any additional benchmarking.)

Introduction: Matlab is a numerical linear matrix algebra package which is used extensively in advanced mathematics, engineering, and scientific computation. For example, I use it in my research to numerically solve the system of partial differential equations arising from a tumor growth model. (Applied computational fluid mechanics.)

This software is about as real-world as you can get; many of the computations you see in this benchmark are similar to those used in audio, graphics, and gaming applications.

Part of Matlab 6.0.0.42a, Release 12 is a benchmark function which uses 6 different tests:

Additional information on Matlab and bench can be found at Mathworks.

I used the following methodology for the testing for each test:

For this test, I ran the PIII 1200 at 141 FSB x 9 = 1269 MHz, and
the PIII-S 1266 at 134 FSB x 9.5 = 1272 MHz. (Discrepancies are due to FSB variations.) This allows us to test the effects of the L2 cache size independently of the CPU clock speed, although the memory bandwidth (via the FSB) will vary. Notice that the PIII-S (and thus the memory) is running at a lower FSB, so the results here most likely slightly understate the performance differences. 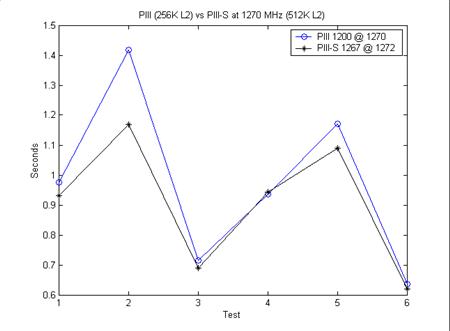 Notice that the PIII-S chip with its increased L2 cache performs better in most benchmarks. 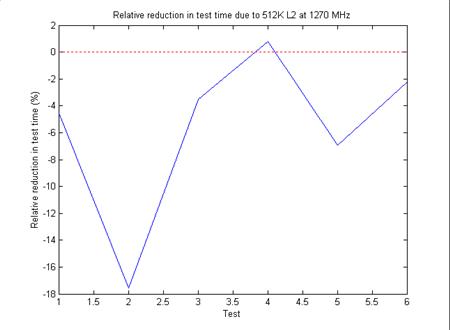 The relative change gives the percentage decrease in execution times and thus the percentage increase in performance. Notice that the PIII-S chip with its larger L2 cache performs better in most benchmarks, on average 5.66% better.

For this test, I ran the PIII 1200 at 149 FSB x 9 = 1341 MHz, and
the PIII-S 1266 at 141 FSB x 9.5 = 1341 MHz. (Discrepancies are due to FSB variations.) Once again, this is to test the effects of the L2 cache independently of the clock speed. Notice that the PIII-S (and thus the memory) is running at a lower FSB, so the results here most likely slightly understate the performance differences. 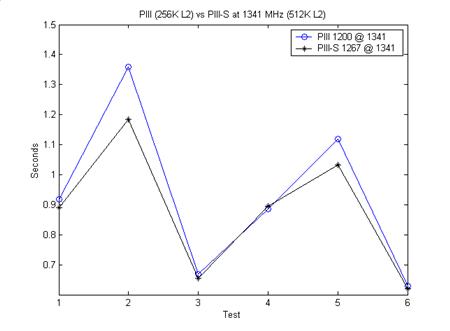 Once again, the PIII-S chip with its increased L2 cache outperforms the PIII. 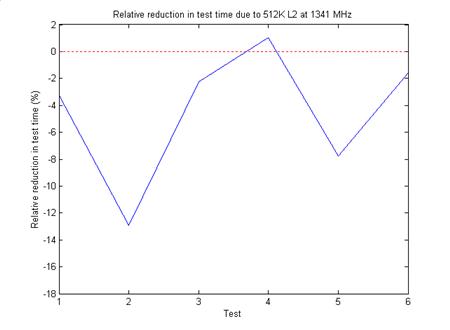 For this test, I ran the PIII 1200 at 149 FSB x 9 = 1341 MHz, and the PIII-S 1266 at 149 FSB x 9.5 = 1415 MHz. (Discrepancies are due to FSB variations.) This allows us to test independently of the memory bandwidth and any other FSB effects. If the L2 cache is not important to the performance, then the execution times should scale linearly with the multipliers. That is, the PIII-S times should be

lower than those of the PIII if the L2 cache is not an important factor. If the results differ by more than this amount, then we have again shown that the increased L2 cache improves performance on a level that is discernible from any improvement due to raw clock speed. 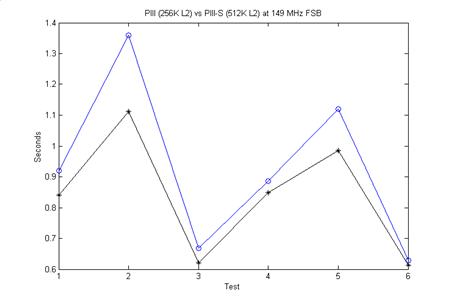 Once again, the PIII-S chip outperforms the PIII. The question is, can this increase in performance be attributed to the increased multiplier alone? The next graph addresses that. 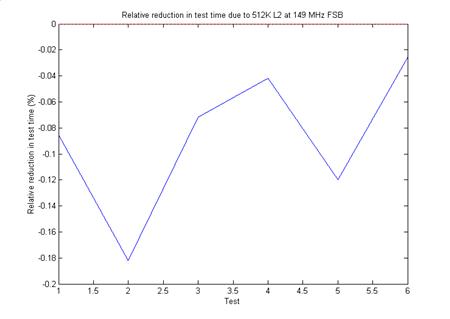 The relative change gives the percentage decrease in execution times and thus the percentage increase in performance. Notice that the PIII-S chip with its increase L2 cache performs better in most benchmarks, on average 8.78% better in this case. As this result differs from the linear result by 67%, we can safely conclude that the L2 cache is responsible for a substantial portion of the faster execution times.

At equivalent CPU clock speeds (and even with reduced memory bandwidth), a CPU demonstrates appreciably better performance in computationally-intensive tasks.

In the case of the PIII architecture, doubling the L2 cache improves computational performance on the order of 4-5%.

An
interesting “historical” article turned up by google is here.

Item One: A Thoroughbred Revision A 1700+ Shows Up For Sale: Newegg has them. It’s a 1700+ listed for $75, and it’s the one clearly identified as a Thoroughbred. All the codings on the Newegg webpage are consistent with a

What I Want For Christmas

First thing I have to do is move Christmas. Santa can’t deliver what I want by December, besides, you always get better deals off-season. 🙂 So let’s move Christmas to sometime next summer. That’s enough rest for Santa. What do

Tweaktown has a news item (dated 9/12, 7:08 AM) which states that Epox Taiwan told them that the 8X AGP problem is being caused by the GPU, and a new stepping corrects the problem. While this explanation is being disputed