The AMD Trinity A10-5800K APU is set to hit the market in the near future. To that end, we are able to share a limited amount of details at this point, but we thought a teaser preview might pique your interest. This 2nd generation AMD-A series APU boasts an unlocked quad core which comes in at a lofty max turbo frequency of 4.2 GHz and a base clock of 3.8 GHz.

The new Piledriver x86 core technology will have several enhancements over the previous Bulldozer APUs, and will include the following changes:

On the integrated graphics front, the A10-5800K will feature the HD 7660D graphics processor. The GPU clock speed is set at 800 MHz and includes 384 Radeon cores (Shaders). AMD A-Series APUs natively support AMD Eyefinity Technology, for up to four monitors.  Additionally, by adding a discrete graphics card to the fold, the dual graphics support can deliver a performance boost of up to 75 percent. 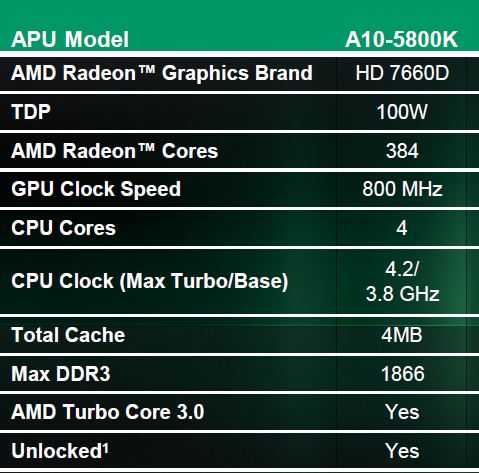 As is customary here at Overclockers, we’ll have a full review ready for launch day, so stay tuned for that! It’s still unclear when the Piledriver CPUs will be released, but when we dive into the Trinity A10 APU we should get our first glimpse of the performance that AMD’s future Piledriver architecture will offer.

AMD has announced a new naming scheme for its mobile processors for 2023 and beyond. Going forward AMD will utilize a number coding system that is simple and logical. Each of the four digits plus a trailing letter indicates its model year, market segment, architecture, feature isolation, and form factor (i.e. TDP). Below you will find AMD’s highly informative breakdown of how this works and why they decided it was time for a change.

This guide will teach you how to properly overclock your Phenom II, and squeeze out every last drop that the CPU has to offer.